Following lockdown due to Covid-19, we had been unable to return to Two Pines Fen SSSI in the spring to do a cut and rake ahead of orchid flowering season.  This Site of Special Scientific Interest is home to 12 species of orchid.  It is flanked by two different golf courses and we are only able to safely work there when one of the holes is closed.  The Golf Course had kindly arranged to closed a hole on the Green Course and moved the tee on the Red Course so that we could work without fear of being hit by golf balls.  The only problem was the weather!  It rained and rained practically all day!

But this did not deter us - seven undaunted Green Gymmers were joined by JimB, who is a very experienced scyther, and well known in Oxfordshire, to rise to the challenge.
As we approached the Fen from the Green Keepers' compound area, we could see how much silver birch, in particular, had started to encroach on the Fen, with its pretty green and gold leaves shimmering in the rain.  The Fen was looking very autumnal with lovely russet colours of autumn - in marked contrast to the two Scot's pines which give the Fen its nick-name with their greyish, gnarled trunks and dark green pine needles.
Janet, Barbara, Eleanor and Margaret set to work with loppers to cut down the birch, oak and hawthorn saplings, which if allowed to grow, would turn the Fen into a woodland and we would then lose the specialist plants and the fauna they support, which makes this site so special.  Calcareous (chalk) spring fed fens are one of the rarest habitats in the country and between them all, Oxfordshire boasts 40%, so we have to do all we can to keep them in favourable condition to continue to support the increasingly rare flora that thrive in these nutrient-poor soils.
The three scythers set to work near the spring fed stream and Graham was soon hard at work raking up the cuttings behind them.  Under instructions from Rod d'Ayala, we had been asked to separate the seed rich cuttings from the middle of the Fen from the other cut material and start to fill the gaps between the leaky dams with the lesser grade cuttings.  The dams have been created to slow the flow of water from the spring, thereby making the Fen wetter and less prone to drying out.  The seed rich cuttings were put into a drag bag next to the rest of the cut material, ready for collection by the Green Keepers to take to the nearby Boundary House Fen, another SSSI on the Golf Course, where Abingdon Green Gym will be working at its Saturday morning session at the end of the week.
After a welcome break, with a much-needed cup of tea or coffee and biscuits enjoyed in one of the outbuildings in the Green Keepers' compound area, we were sufficiently fortified to carry on working, concentrating on cutting down saplings, scything the reed and rushes and raking.  The wet vegetation made for heavy raking.  We definitely felt as though we'd had a work out when the day ended!
Lunch was called at 1.00-ish, at which time, our numbers depleted, but on our journey back to our shelter, we carried unwanted tools to put away so that those staying after lunch would not have to make two trips.
After our respite, the three remaining Green Gymmers returned to the Fen to tidy up the rakings and to cut some of the seed-rich central area of the Fen.
Extra care and attention was paid to a patch of rare sphagnum moss, which had been carefully scythed around in the morning, and then Barbara cut back the vegetation more delicately using shears.
We lost count of the number of golf balls we found and almost as fast as we put them out to the side of the Fen, golfers would come up to take a few!
Everyone did a super job in miserable conditions.  We didn't finish it, so we are looking to arrange another mid-week session, hopefully when it will be dry!
A good day's work and we hope the orchids will flourish again next year.  Huge thanks to everyone who came along in ghastly weather to get this work done.
-Sally 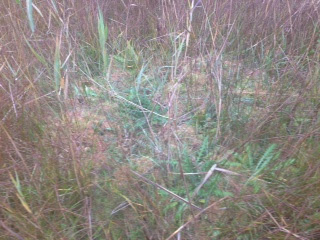 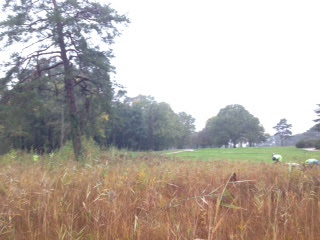 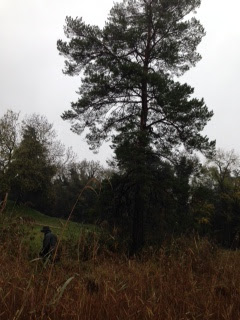 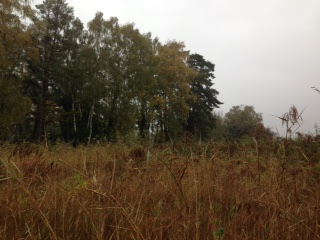 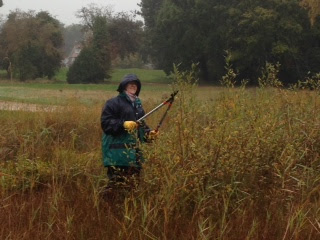 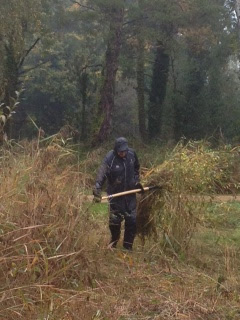 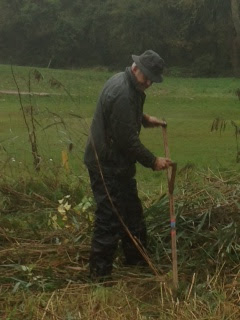 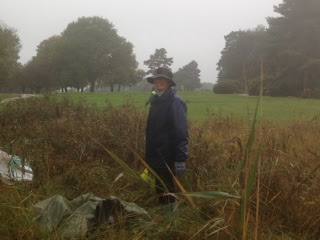 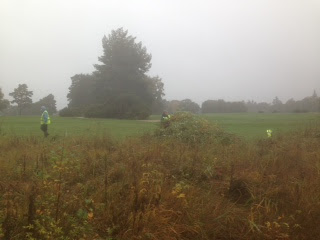 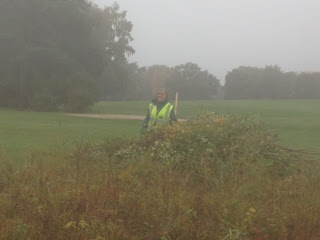 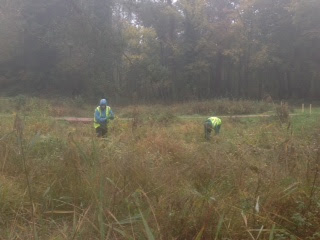 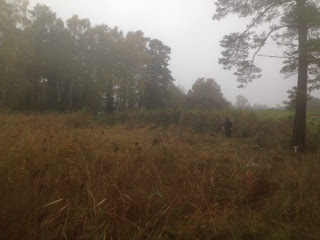 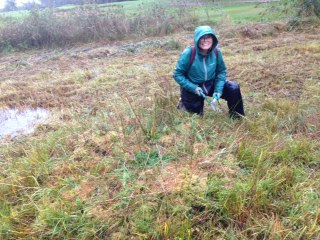 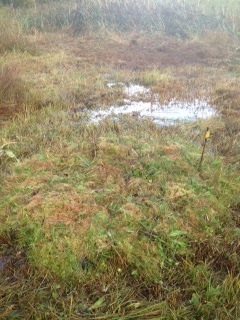 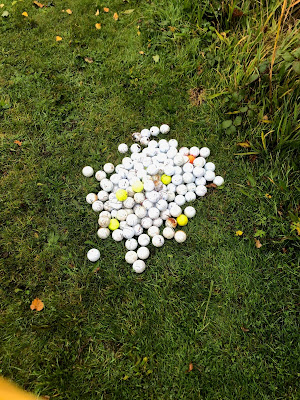 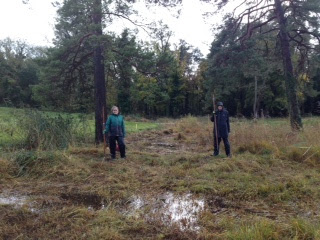