Showing posts from July, 2012
Show all

By Andrew - July 31, 2012
As mentioned in the last blog, we decided to have another session pulling up Himalayan Balsam at Frilford as the Town end of the Ock is practically clear of it this year. The wood had dried out considerably since our joint session with Sonning Common two weeks previously and the weather was very much better, so head protection was needed against midge attack rather than rain. This time there were only 8 of us, but we got a lot done. A large central section of the wood is clear of Himalayan Balsam now. Much of it is coming in to bloom now and when the seed pods are ripe they explode when touched, each one scattering its seeds up to 7 metres. Himalayan Balsam pulling is somewhat addictive, but we had to be strong minded and finish at 12.30. We probably won't be back here until next year, when we will find out how much progress we have made. -Eleanor
Post a Comment
Read more

By Andrew - July 21, 2012
In a change to the published programme, next Saturday, 28th July, the session will be held at Frilford SSSI instead of the Ock River Path. This is due to the need to make further progress with Himalayan Balsam pulling at Frilford and fact that there isn't much urgent work to be carried out along the Ock Path at present.
Post a Comment
Read more 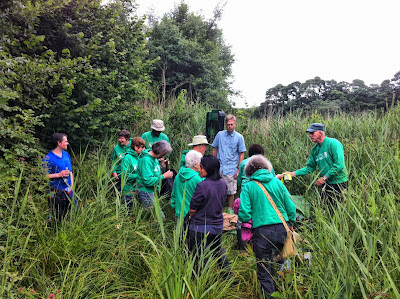 Finally the summer presented some fine and sunny weather for today's session at Cothill Fen!   As usual, site warden, Graham from Natural England was present to oversee the tasks.  This time they included re-instating an overgrown path encircling the fen and also reed-bending.  The latter involved bending the upright reeds over to create more space and light for the other local plants to thrive, while ensuring the reeds themselves survive and crucially don't re-shoot upwards.  At the same time, new tree shoots within the fen area, mainly Alder, were trimmed and kept in check. A fairly large group of around a dozen green gym volunteers turned out this time thus ensuring that good progress was made. Following the mid-morning break, Graham gave a quick talk about the local plants and showed us some examples of the typical species found at Cothill.  These included Hemp Agrimony, St John's Wort, Lousewort, Common-Spotted Orchid, Black Bog Rush, some sedges along with various
Post a Comment
Read more 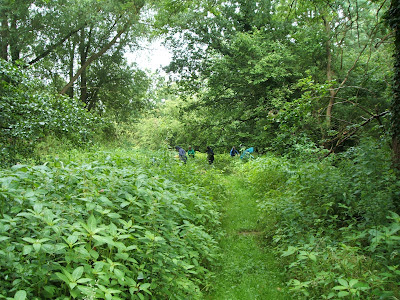 This Saturday we held a joint Green Gym session with Sonning Common Green Gym at the SSSI site at Woodhaven, Frilford Heath. Many hands were needed to clear the vast swathes of Himalayan Balsam before they started seeding and with twenty-five people from the combined groups, we were able to make good progress, though much remains still to do. The weather alternated between drizzle and heavier showers and after such a wet summer ,the area was very muddy and the ground boggy. When we stopped for our break, we had accumulated several large mounds of balsam. Having fortified ourselves with tea and coffee served from folding tables for a change and large quanitities of delicious cake, we continued with our task and the difference we made showed in the before and after photos. It was good to renew our acquaintance with members of the original Green Gym and for some of our new members to meet them for the first time. We hope to join them next year on one of their sites. A few of us
Post a Comment
Read more

By Andrew - July 17, 2012
Abingdon Green Gym members were invited to a social evening organised by Natural England and BBOWT for the volunteers who work on the Cothll Fen and Parsonage Moor sites. The event was held at Cothill House School and attended by eight Green Gym members. Fortunately, the weather had turned fine after heavy thunder storms as we set out for a tour of the sites. We crossed the impressive playing fields and golf course of the school, then on to Parsonage Moor. Our guide, Martin, told us about the management plans for this important alkaline fen. Some distance away we could see the three ponies which live there to graze the fen. A number of orchids and typical fenland plants grow here, such as butterwort, Parnassus grass, marsh valerian and hemp agrimony. It is also a habitat for soldier flies as we were told by the surprising number of fly experts present. We continued on to Cothill Fen, also known as Ruskin Reserve, where Green Gym works several times a year, clearing reeds which su
Post a Comment
Read more 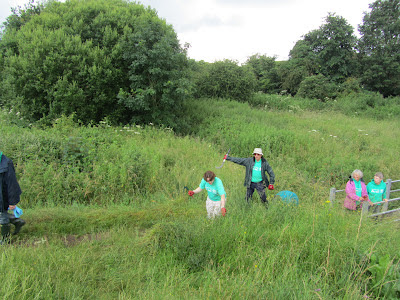 Once again we were at Abbey Fishponds reserve, helping with various tasks, such as raking up cut reeds and vegetation, litter picking, seeking out and removing remaining Himalayan Balsam and cutting back vegetation from the paths, the path running along the north eastern side being particularly overgrown. The attendance was very good, eleven Green Gymmers in all plus three from the Abbey Fishponds group, and we were also pleased to welcome a new volunteer. Despite the intervention of a few short but heavy showers, we were able to get quite a lot of work done. -Eleanor A few photos by Eleanor:
Post a Comment
Read more 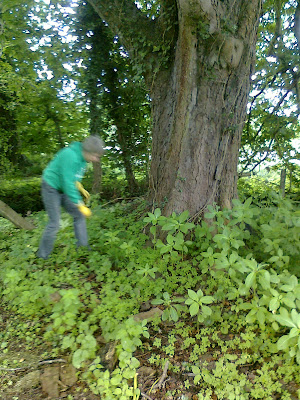 This was another Himalayan Balsam-bashing session at Frilford for the 10 or so volunteers who turned out for an uncharacteristically dry June day.   While the rain held off, the conditions underfoot were still rather damp and the Balsam had grown up somwhat since our last visit.   The battle to rid the site of this foreign invader is slowly being won, but another sesssion in a couple of weeks' time should also help greatly.  Watch this space! -Andrew Photos by Margaret from around the site: work commences! the scale of the task is somewhat daunting... the same area successfully cleared! more evidence of our hard work Balsam, what Balsam?! the volunteers heading home following another good session
Post a Comment
Read more
More posts