This was the our second session at Jarn Mound to continue with the restoration of the wild garden, originally laid-out in the 1920's and 30's.

To show us what was needed to be done, Rachael from the Oxford Preservation Trust was on hand and outlined two main objectives.  The first of these was to lay gravel on parts of the path that had become very muddy, including an area at the entrance to the site.

The second objective was to clear willow which had invaded an area which was once a small lake or pond. We split into two groups, with the pond clearing group having some extra help from some friends of Rachael.  The pond workers made good progress and collected six or seven drag bags of vegetation which were removed from site, ready to be collected later.

The gravel laying was certainly a good physical workout, with six of us and three wheelbarrows.  The gravel was transported quite a distance - 200-300 metres from where it had been dumped, uphill to the muddy patches. We managed to complete the work by the end of the session, much to our relief!

A welcome rest was provided by the tea break and the purpose-built shelter certainly made the catering easier. After the break and a couple of updates from session leader James, Rachael gave us a potted history of the gardens. Subsequently, some of the volunteers still had enough energy to take a walk up to the artificial viewpoint nearby, although the trees have now grown up around it and largely obscured the views across to Oxford in one direction and the Vale of the White Horse in the other.

There was much satisfaction at the end of the session for a job well done. This is of course by no means the end our visits here, not even the beginning of the end but may well be the end of the beginning! Rachael has more plans for the garden which I'm sure the green gym will be part of.
-Kevin 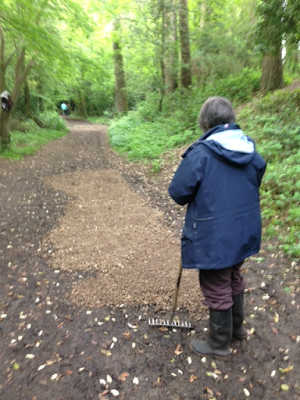 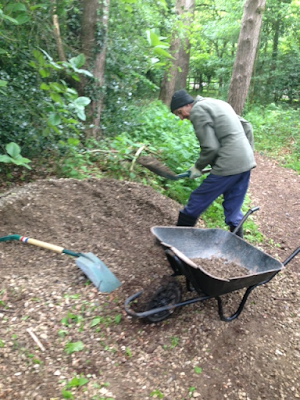 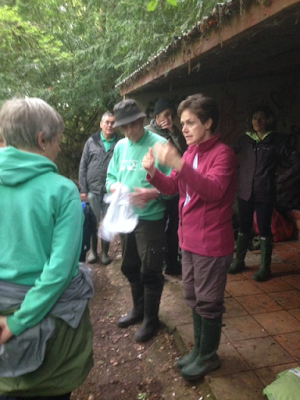 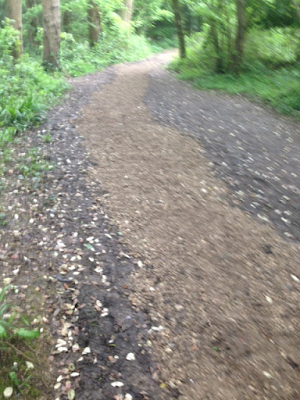 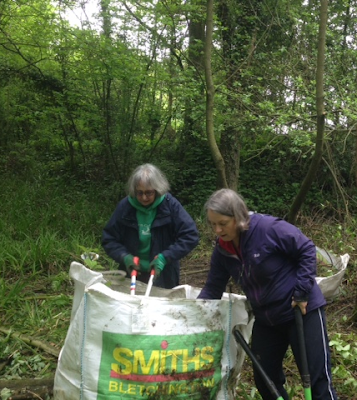 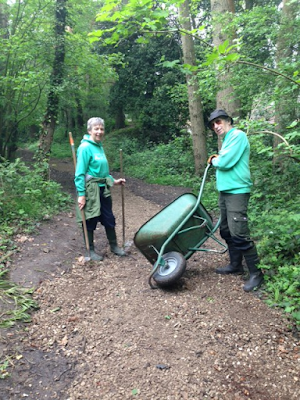 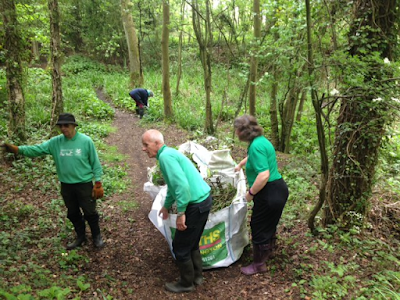 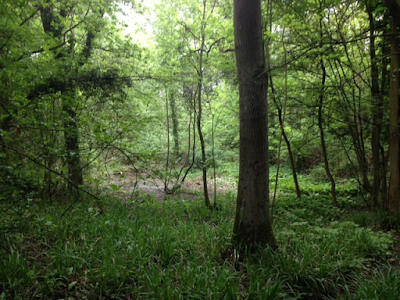 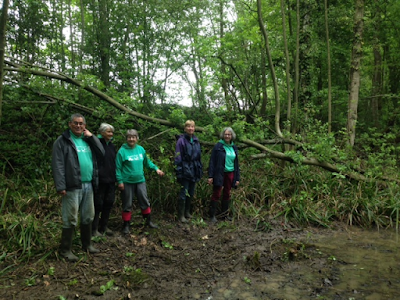 Eleven Green Gymmers met opposite the Merry Miller pub for our session at Cothill Fen. We were joined by Judy Webb, who was in charge of the task, and Stephanie, an NNR  trainee.

This time we were not going on to the fen itself but cutting back scrub and small trees from the far end of the fen alongside the footpath. The weather was fine, though colder than the previous week but we soon warmed up as we set to work.

There was a lot of hawthorn, wild raspberry and hazel to be cut back. Judy is hoping that clearing the scrub from the edge of the fen will encourage wild flowers to grow. There were also some larger trees to be felled, so we had brought along hard hats for that task. We added the brash and smaller branches to the dead hedge we had made over two years ago.

As we worked and during our break we heard a cuckoo, a green woodpecker and a warbler, though none of us could tell what kind by its call.

By the end of the session we had cleared a lot and added considerably to the dead hedge. We will be coming back in July to rake up and stack reeds on the fen.
-Eleanor

A few more photos from Withymead...

Here are a few more photos from last Saturday's session at Withymead Nature Reserve, all taken by warden Keith Tomey:

At last! The sun was shining on the Green Gym team as they arrived at Withybush Nature Reserve at Goring. Eleanor Dangerfield was leading, and our tasks were set by the Wardens, Dorothy and Keith. who we were sorry to learn were moving on shortly to work in Cumbria. One of the first jobs was pulling out weeds from amongst the hedge-plants which Petra and Janet addressed with enthusiasm. 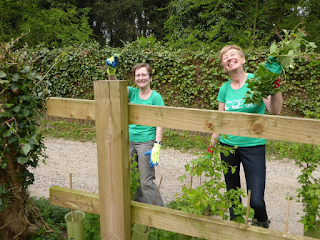 Margaret collects suitable small branches to be used as markers for paths through the boggy parts of the site. 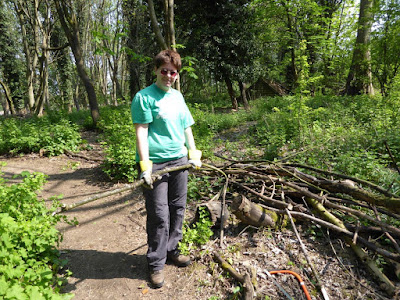 Our coffee break was a real contrast to a lot of our recent experiences of having them standing up in the wind and rain. 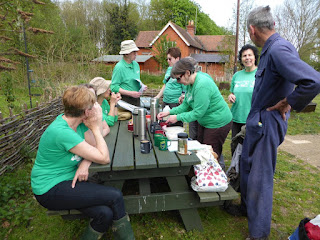 We managed to have a walk round the site. A notice at the gate warned about the toxicity of the algal bloom which can be seen on the fairly static water. In the background can be seen the beautiful and rare Lodden Lilies which are a feature of the Reserve. 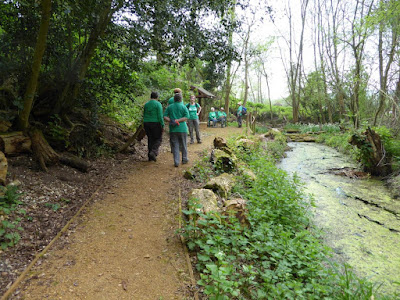 Everywhere young wild plants are making themselves at home and flourishing amongst dead material. I think this could be Lords and Ladies. 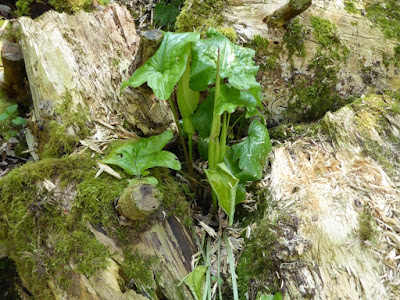 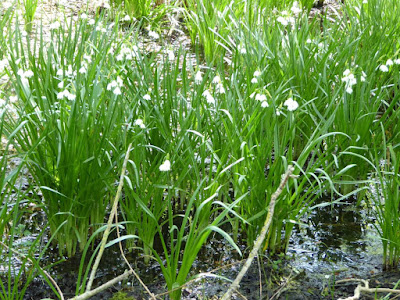 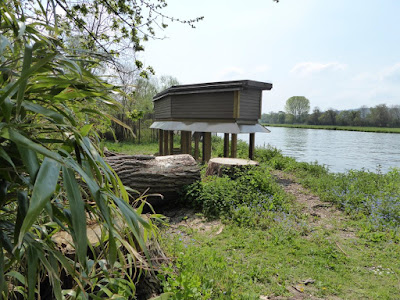 The coot doesn’t seem bothered by toxicity of the algae! 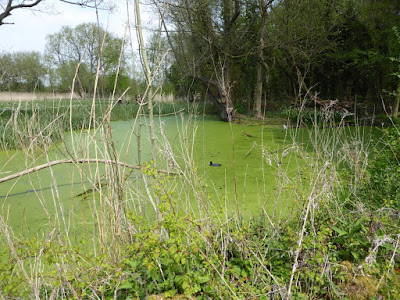 Sadly, this is the last time we will be going to Withymead for the foreseeable future as on site wardens Dorothy and Keith are leaving. Due to a change of policy by the Ann Carpmael Trust, which owns the site, the future of this beautiful and diverse nature reserve is uncertain. We have really enjoyed our visits there.
-Barry
Posted by Andrew at 9:57 PM No comments:

We assembled at the Tesco end of the Ock Valley Walk for the final session of April.  The weather was, thankfully, dry and mild, and perhaps as a consequence, our turn-out was larger than usual! Twenty one of us made the effort, and we were pleased to welcome along Jessica for the first time, and also Kristina's son Giles who was down to visit.

Margaret was leading on this occasion. As soon as we had transported our tools and other paraphernalia across the road to our usual encampment spot, she outlined our tasks for the morning.

This location is arguably not the most exciting on our programme, but we feel that we make a real difference in enhancing the environment here.  Thus, as usual, a litter-pick was the main priority, along with trimming back some tree branches encroaching upon the path and also some early Himalayan Balsam pulling!

Since our last visit, the path itself from Tesco to the footbridge and beyond to the Tithe Farm estate had been tarmacked. This is a big improvement on the previously rutted track, and it's use appears to have increased as a consequence.

Much litter was gathered and large amounts of Balsam were identified - we made a small dent into dealing with this troublesome non-native plant, but there is certainly plenty remaining for future occasions!  At least it ensured that we had plenty to keep us busy throughout the session, especially given our larger-than-usual number.
-Andrew