Showing posts from October, 2021
Show all

This week the Abingdon Green Gym team were at the Abbey Fishponds (which contain neither fish, nor an abbey). As the Earth Trust website explains, this site is so named because it was thought that the embankment on the site was a medieval dam built by the abbey to create ponds for fish, but archaeological evidence shows that it is more likely to be the remains of a roman causeway. Whatever the history, Abingdon Green Gym were here in the present to help manage the site under the guiding hand of Tim from Earth Trust. We also welcomed two new volunteers, Liz and Mike, who we were very happy to have with us!  We started with a safety briefing from Tim and the day's GG leader, Adrian, before splitting off in to groups to tackle the morning's wide-ranging tasks. There were three main activities for the day. Firstly, scything, raking, and piling the ever-rampant reeds. Secondly, bow-sawing down and neatly piling straying willow into rudimentary hedges, and lastly (but not least-ly)
Post a Comment
Read more 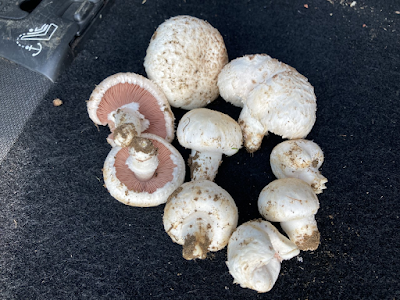 This week's blog post was written by volunteer Eleanor Dangerfield.  This Saturday our session was at the Riding for the Disabled stables at Southmoor. Our previous work party here was in the Summer, when our task had been to clear a ditch between two fields. Now, we needed to continue the clearing so the water would be able to drain away.      Ten of us set off for the ditch, which now had a small amount of water at the bottom. We were also joined by a few volunteers from the centre. Some jumped into the ditch and set to work clearing the nettles, brambles and other vegetation with slashers and scythes while the others raked it into piles along the side, to be collected and taken away by the trailer. It was amazing how much piled up. The trailer would be kept busy long after we had gone. There was a treat in store for our break as a car driven by an RDA volunteer arrived with a table, a hot water urn, coffee, tea, soft drinks and home made cakes. We were also delighted to have a v
Post a Comment
Read more 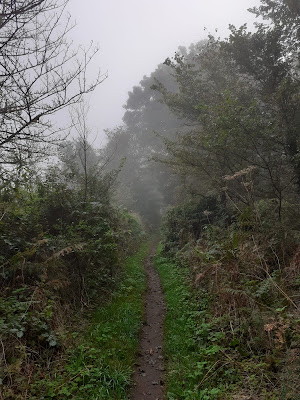 This week, the Abingdon Green Gym Team were at one of the most beautiful sites that we frequent: Dry Sandford Pit. Unlike last week, this Saturday's session was blessedly dry, but it still definitely felt autumnal as we all met in the small carpark shrouded in mist. This keen blogger had walked to the meeting across several other nature reserves to get here (see the spooky photos below), which are now showing the beginnings of their autumn colours of brown, yellow, orange, and red.  Eleanor D. was today's session leader, and she gave us a quick briefing about the day's tasks. The first was to clear the track into the site of overgrowth so that a trailer could navigate down it to take the cattle away. 'Cattle?' I hear you cry, 'what do cattle have to do with a nature reserve?' Well, my dear readers, quite a lot. In the summer, Dry Sandford Pit is home to some little Dexter cattle. 'Little' is not a pejorative here, Dexters are the smallest European ca
Post a Comment
Read more 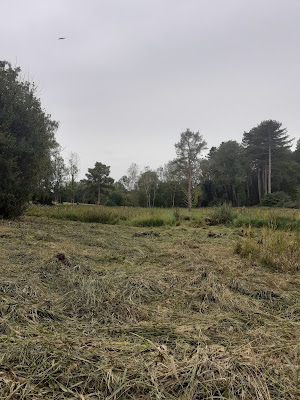 It was a very rainy Saturday for our Green Gymmers this week as we set off for Boundary House Fen, but the weather (and indeed the fen itself) was no match for our wellies, raincoats, and waterproof trousers! After the team had assembled we were given a quick briefing by the day's noble leader, Sally, and the capable Rod D'Ayla, guardian of this patch of fen. Rod explained that he had been doing some reed cutting and was starting to dig some new ditches to divert the water where it is most needed - a task which has no end. Our job, then, was to rake up the cut reeds and transport them to where they were needed to plug some deeper sections of water. Two able scythers, Jim and Adrian, were also on hand to continue the reed cutting efforts.  While it was very wet, everyone did an excellent job of pulling together rake, bag, and drag the reeds into the right place. We were also joined by Judy Webb, who was collecting fungi samples for an event at Harcourt Arboretum. Even though it
Post a Comment
Read more
More posts