Showing posts from August, 2013
Show all

Barton Fields on the Abingdon Blog

By Andrew - August 27, 2013
An article has been posted on the Abingdon blog website providing some further information about the hay raking activities that the Green Gym have been involved with this past weekend... http://www.abingdonblog.co.uk/?p=9521
Post a Comment
Read more 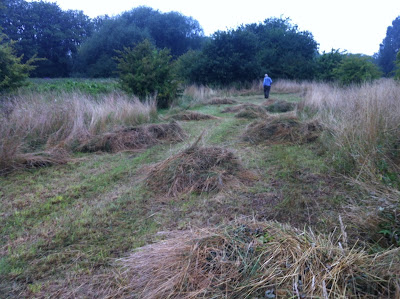 This was our first session at the Barton Fields site for quite some time.  Since November last year in fact - that occasion was one of our rare rain-sodden outings, at which time Barton Fields was flooded in places with the heavy winter rainfall. No such conditions this time.  Even though the forecast again featured heavy rainfall, instead we thankfully got dry conditions.  Probably just as well since our main task this time was to rake and stack hay in the wildflower meadow area. Earlier in the week, the meadow had been mown, hence the need for the raking.  If the cuttings are not removed, they would apparently encourage unwanted plant growth and ruin the pristine conditions for the seasonal wildflowers.  Which in turn would reduce the biodiversity that the field supports.   As always at Barton Fields, we were working under the direction of Abingdon Naturalist Society 'Green Team' wardens, David and Jo.  Most of our fifteen or so volunteers were deployed in the hay raking
Post a Comment
Read more 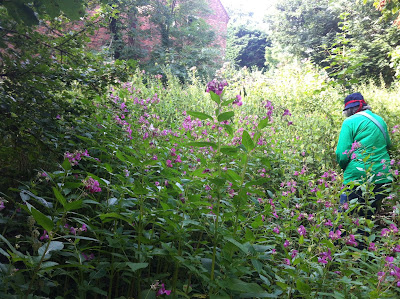 This was an extra session in addition to the published programme, held somewhat unusually on a Friday. Earlier in the week, Eleanor had spotted some Himalayan Balsam growth along the Ock Valley Walk, close to the area of woodchip path that we regularly maintain. Eleanor, Kate and myself met at 10am by the footbridge over the weir, ready to tackle what we thought was just a small patch of balsam.  Instead, there turned out to be rather more than anticipated, alongside both branches of the river.   As usual, the balsam was found to be growing amongst stinging nettles, making the task a little trickier than it otherwise might have been - with us trying and largely failing to avoid being stung to pieces.  Care also had to be taken not to fall in the river as we balanced sometimes quite precariously on the banks of the Ock. Despite finding such unexpectedly mature balsam, a couple of hours and much effort later, our eradication efforts were complete.  As a reward, Eleanor provided tea
Post a Comment
Read more 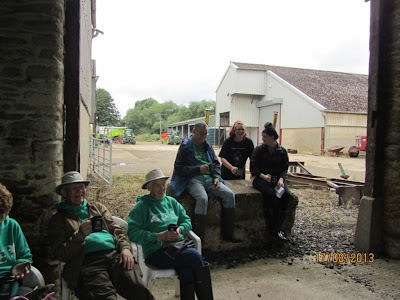 This session saw us at Manor Farm, Marcham for the third time this Summer. There were thirteen of us and we were very pleased to welcome two new members, mother and daughter, who we hope will become regular Green Gymmers. The weather was grey and blustery, a complete contrast to our last session here, when the temperature had reached 30 degrees, but fortunately the rain held off. There is so much Himalayan Balsam here that we would need to be working every day for several weeks to get rid of it all. Fortunately the ditch we had worked hard on this year and in previous years was almost clear with only a few remaining plants to be pulled up. We mainly worked on the banks of the stream which runs into the Ock. Seeds that get into the water are carried downstream to Abingdon and on into the Thames. The plants had grown very tall and were forming seed pods, but luckily few of them were ripe enough to pop and release their seeds. We had our tea break in the relative luxury o
Post a Comment
Read more 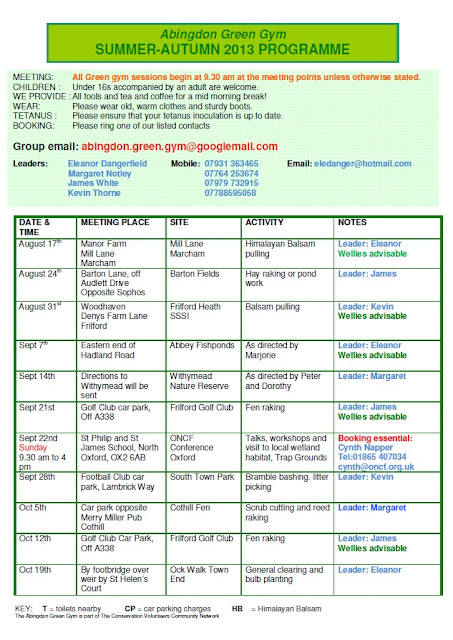 Abingdon Green Gym's new Summer - Autumn 2013 programme has just been published.  This has information on all sessions to be held between this coming Saturday 17th August and Saturday 19th October.  See below for full details or view/download a pdf version on our website - http://www.abingdongreengym.org.uk/programme/
Post a Comment
Read more 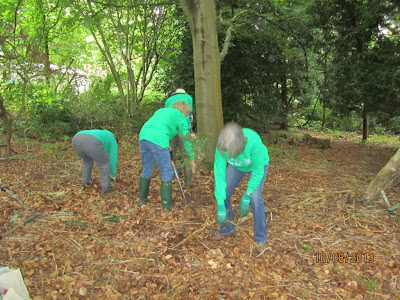 Ten of us gathered by the Open University building on Berkeley Road, where we met Andy Gunn from BBOWT who was to direct us in our tasks. We walked down the meadow to the wood, where there was a lot of balsam growing. This type of balsam is not as large and invasive as Himalayan Balsam and has a yellow flower, but it is still worth getting rid of, so that was one of the tasks. The other task, pulling up bamboo, was much more challenging. Abraham's Wood was once part of a private garden and consequently has a lot of ornamental non native shrubs such as laurel and bamboo. We used forks and spades to try and dig up the roots, which run for many metres underground. Sometimes we were able to pull up a really long root but sometimes we had to give up and cut them off close to the ground.
Post a Comment
Read more 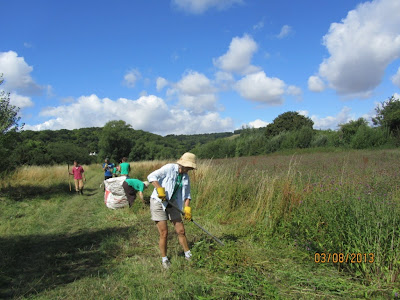 Eleven of us went down to Goring for the annual Green Gym picnic. This year it was preceded by a work party with the Withymead Nature Reserve volunteers, so we really felt we had earned our lunch time feast! The site was Little Meadow, a lovely spot right next to the Thames Path, not the main reserve where we had been before. However, the tranquillity was disturbed by the proximity to the railway viaduct. Why is it that trains are never so frequent when you are actually waiting for one? We were grateful for the very clear directions sent by the wardens as we would never have found our way without them. As the site was half a mile from the nearest road we were also grateful for the loan of wheelbarrows to transport the food and drink. It was the time of the annual cut of the wildflower meadow and while the wardens, Dorothy and Keith used the mower and strimmer, we joined the regular Withymead volunteers in raking up the cut vegetation and transporting it to the heaps at
Post a Comment
Read more
More posts