On Wednesday my kitchen became a hive of activity, as we set about producing the highly prized Green Gym Marmalade.  It was a busy, sociable and very productive day.  We managed to make 70 jars in one day which is a record.

The production line worked well with the help of Sally, Margaret, Eleanor and a visit from Janet to help stir the pot.  It is still possible to put in your order to Eleanor, (£2 a jar) a worthwhile contribution to Green Gym funds. 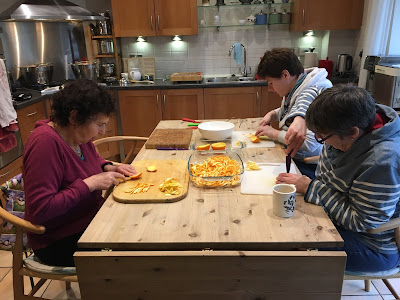 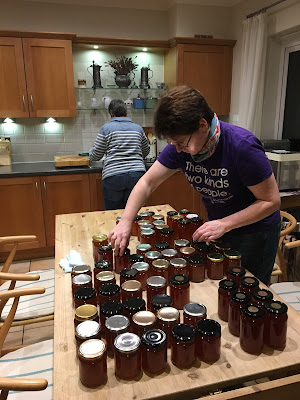 Posted by Andrew at 8:37 PM No comments:

We worked on Elizabeth Daryush Memorial Field on Boars Hill. The day was cold, grey and drizzly, but we soon warmed up with the tasks in hand.

The very wet snowfall before Christmas broke an amazing number of branches. Mainly fir trees, but also deciduous trees.  These had to be picked up so that the bulbs would have a chance and not be smothered.

We made a long dry hedge along the roadside edge of the site with the material gathered.  It was a very satisfying activity.

We could see the first snowdrops coming through and we know from working there in previous years, that they will be followed by daffodils and bluebells in turn.

Posted by Andrew at 8:33 PM No comments:

For our first outdoor session of the year, we returned to the Stonehill Community Garden, working under the guidance of wardens Rachel and Richard.
Having gathered in the car park, the morning's tasks were outlined.  The first of these was to dig a pair of shallow trenches within the garden, which would form the foundations for two polytunnels that are to be installed in the coming weeks. A variety of vegetables will be grown within these structures once they have been erected.

Secondly, the netting around the fruit cage required re-positioning and tightening. It is there to keep birds and other wildlife out. Sally and Carolyn were assigned to this.
A total of twelve Green Gymmers were in attendance, and given the impressive work rate for which we are renowned, it came as little surprise that the jobs were completed rather speedily. Well before the scheduled tea break, in fact.
An early elevenses was therefore hastily arranged while further details were devised. Fortunately there was much to do and we were subsequently put to good use.  Only after being fully refreshed, of course.

One item on the agenda was to light a bonfire and burn a quantity of cuttings that had accrued during previous operations here. Adrian got underway with this while the remainder of us were taking our teas and coffees. Many of us later joined in, at which point much channelling of our respective inner pyromaniacs was witnessed.  We piled on the vegetation and created rather a roaring success of a fire, sending a significant plume of smoke across the grounds and beyond.

Meanwhile, Petra was deployed to feed the chickens and a number of other volunteers helped Richard with a new task. This involved clearing the area that the self-watering polytunnel had previously occupied. The tunnel had recently been partially destroyed during a storm, but the plan is to reinstate it in a new and improved configuration.

These secondary tasks kept us busy up until the 12:30pm deadline and ensured that we barely noticed the biting cold and precipitation that had been a fixture of the occasion. Ahem.
-Andrew

Our programme for Winter 2018 has now been published and can be viewed below.  Alternatively, a pdf file version can be accessed via our website HERE 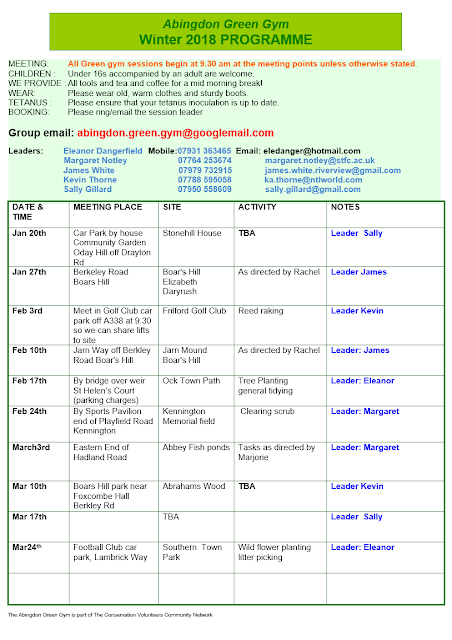