We returned to Two Pines Fen today to pick up where we left off last week - to continue scything and raking the reeds across this Site of Special Scientific Interest (SSSI), set within Frilford Heath Golf Course. Again, our session was held to take advantage of the current course closure.

Led again by Sally, we were 18-strong this time including new member Colin and almost-new member Camilla. We had five scythers among us and the remainder of the group raked and stacked reeds both in piles on the boundaries and within the stream running through the fen to slow the water and encourage it to spill outwards onto the wetland area.

There had been plenty of reeds left untouched despite our best efforts last week and these were all cut during the morning on the main site with clearance on an additional small area off to one side. A further large reed bed area will also require attention in the near future, but we did well to achieve what we did today.

Our new programme for Winter 2020/2021 has just been published. A downloadable pdf version can be found here: https://groups.tcv.org.uk/abingdongreengym/files/2020/11/GGWinter2021.pdf

We are currently looking for new session leaders! All necessary training will be provided. Please contact us for further information or speak to a session leader/committee member at any Abingdon Green Gym session. 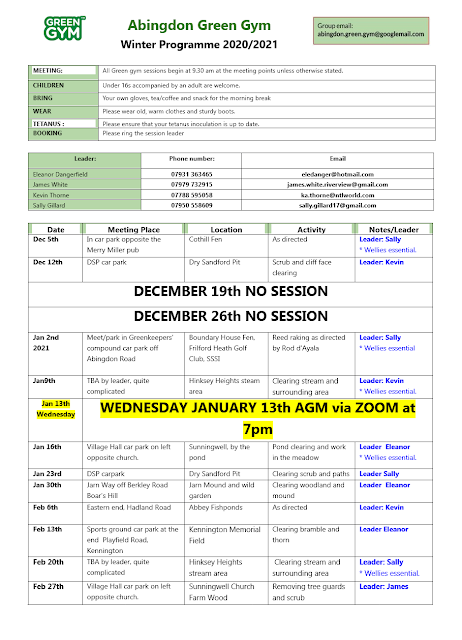 Posted by Andrew at 9:28 PM No comments:

Two Pines Fen Site of Special Scientific Interest (SSSI) at Frilford Heath Golf Club was the venue for yesterday's re-scheduled Green Gym session. We work here with Natural England (the government's adviser for the natural environment in England), who are happy for our socially-distanced work parties to go ahead during the current lockdown period. Their operational update regarding activities during the ongoing coronavirus situation can be found here - https://www.gov.uk/government/news/operational-update-covid-19

Sally took on the leadership duty and instructed the 15-strong group on the jobs to be carried out after we had assembled at the ground-staffs' compound. After completing the signing-in form and the risk assessment, we set off for the fen, a short walk to the end of the nearest fairway.

The principle task involved raking up reeds that had already been cut during previous sessions and those that were cut during the morning. These were then stacked in piles by the track at the edge of the fen for later collection. As some of us raked, a trio took up their scythes - leader Sally, Adrian and new member (green) Jim. In addition, shoots of new willow or alder growth were lopped back and added to the brash pile at one end of the fen.

We have worked on this site for a few years now, but it requires quite a lot of attention at the moment following a period of relative neglect after the first lockdown. Our sessions here have previously been held during the week since it lies squarely within an active part of the golf course and the increase in flying balls on a busy Saturday morning can be a real hazard! Since the course has had to close for the time being, now is the ideal time to get our work completed safely. It is also of sufficient ground area that a reasonably-sized group can spread out and work in socially-distanced manner.

As we progressed, we found numerous golf balls amongst the reed bed. A collection of around 100 had amassed by the close of play!

It was apparent that despite our many hands and our good work rate, there was no way that we would be able to complete the task within the allotted time. Especially as there is a secondary area of reeds that also requires attention on the other side of the main track. Not to worry - we will return here again next Saturday to pick up where we left off and may have an all-day session, though this is yet to be decided!

Posted by Andrew at 8:52 PM No comments:

Our remaining programme for November has been cancelled due to the lockdown. However, volunteering is still permitted under the government guidelines and our parent organisation TCV have approved us holding sessions during this time subject to the updated COVID 19 safety guidelines. Therefore as part of a revised schedule, a group of six of us met at the Tesco end of the Ock Valley Walk for a socially-distanced morning of litter picking, path sweeping and sowing of wild flower seeds.
Eleanor led the charge, issuing us with our details. It was apparent that there was a large amount of litter to be collected and half of us set off with bags for recyclable and non-recyclable waste. Much of the bounty was made up of discarded drinks cans and bottles, with an alarming number of disposable face masks also lining the path.
As well as litter, the path was covered with fallen leaves which had become quite slippery as a result of the rain. Armed with rakes and spades, we cleared these to the path margins in an effort to make this busy thoroughfare a little safer for passers-by.
Meanwhile, Sally cleared a small area by the bridge to plant some wild flower seeds which will hopefully make the area more attractive and wildlife-friendly come the summer months. Time will tell!
After a short mid-morning break, we continued for another 15 minutes or so, finishing off our tasks before plotting our escape, hastened by the fact that it was pouring with rain.
Joanna had come out to meet us (and to provide me with a lift home!) at the end of the session, bringing with her Elly the puppy - who quickly made friends with the group and might well become the new Green Gym mascot!
-Andrew

Posted by Andrew at 9:08 PM No comments:

This session gave us the opportunity to finish off the wood chip path and plant spring bulbs and wild flowers. There were seventeen of us, which was lucky as there was a lot of work to be done.

Two big heaps of woodchip had been delivered, though at the opposite end of the path to where they were needed. Fortunately, we had two wheelbarrows on the go, with teams to load, transport and rake.

We chose two spots within the wooded area to plant our spring bulbs – wild garlic, wood anemones, wild daffodils and fritillaries, varieties which we chose because they will flower before the nettles take over. First, the areas had to be cleared but it was easy to pull up the nettles as the ground was very soft.

We also had decided to plant and sow wild flowers close to the river bank. We chose a spot near the first bench which was fairly clear of nettles and would get a reasonable amount of sunshine. We sowed a wild flower mix, and planted some ox eye daisies and violets as well as some wild daffodil and fritillary bulbs.

That was the more interesting work but there was the inevitable litter picking, which Lesley and Marga gallantly took on.

We had out tea break in our usual spot, which was very sociable, but somehow not the same without communal flasks and shared biscuits.

We set to work again and the woodchip path was just finished when it was time to pack up and make our way back to the car park.

Having taken advice from our parent organisation, TCV, we will continue with sessions during the lockdown period. This will be in accordance with revised COVID-19 guidelines and includes additional controls. We are therefore amending our current programme accordingly.

The updated programme will be posted to our members, meanwhile, here is a statement from the Chief Executive of TCV to clarify the situation:
https://www.tcv.org.uk/statements-chief-executive/

Posted by Andrew at 9:10 AM No comments:

Despite the damp weather, a good number of Green Gymmers assembled in the playing field car park for our session at Kennington Memorial Field under the direction of Lyndsay from Oxford Preservation Trust. We were also joined by some Kennington residents.

Our main tasks were to cut back nettles and brambles from the banks of the stream which runs along the bottom of the valley and to clear brambles and briars from around the trees to stop them encroaching on the chalk grassland.

We usually look forward to a bonfire on our twice yearly visits here, but Lyndsay said it was too windy. It also proved to be very wet with the rain coming down heavily about half an hour into our session but most people were prepared, with waterproof jackets and trousers.

The rain had eased off a bit by the time we had our break, but there was no sign of the sun. However, we carried on bravely, slashing, lopping, raking and pitchforking for the rest of the morning. Fortunately, we had packed up and were on our  way home by the time the rain came down in torrents again.

We look forward to coming back here at the end of the winter. 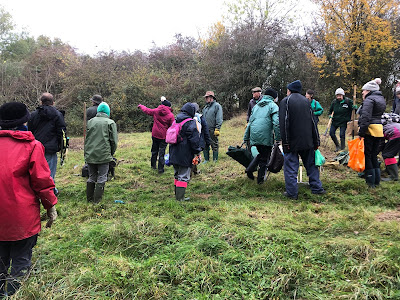 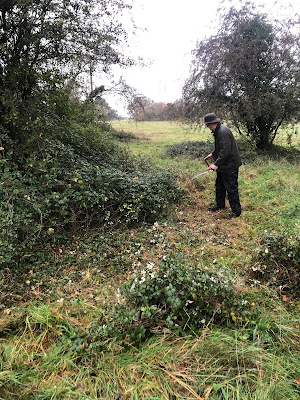 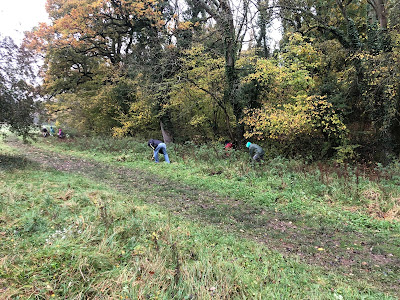 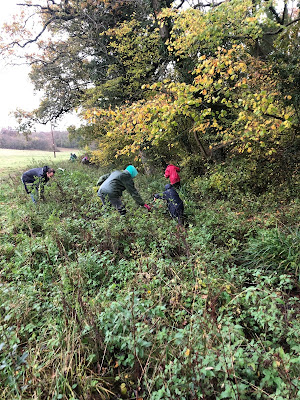 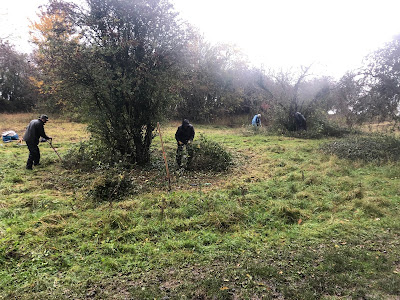 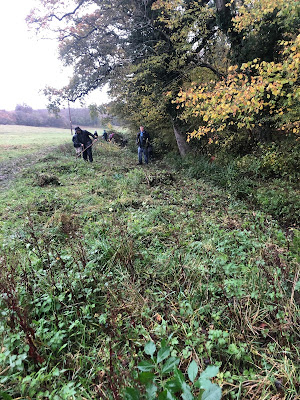 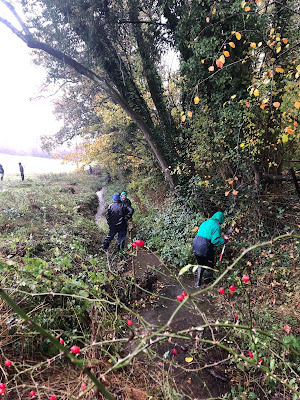 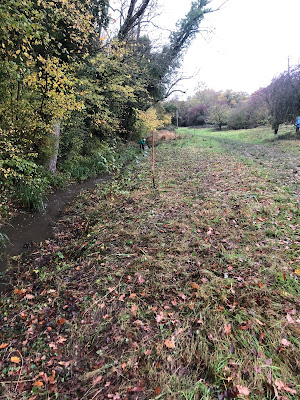 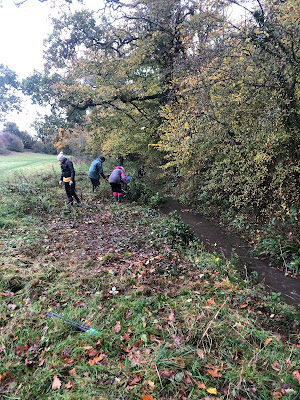 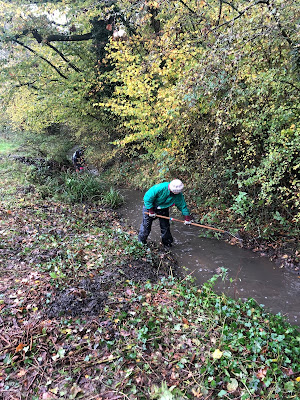 Posted by Andrew at 5:02 AM No comments: