This was the occasion of our maiden visit to Abbey Meadows for a session at the Wild Flower Maze - located just beyond the children's playground and adjacent to the crazy golf course, close to the Thames.

We met in the car park at the end of Abbey Close, where we were met by Lucille from the Abingdon Carbon Cutters group, who have recently set up and look after the area. Having been guided to the site, Lucille then outlined the task of the day, which was to uproot and remove thistle and other prickly plants from the maze, in order to make the area more child-friendly.  The intention is that other wild flowers will be sown in their place.

Spades and forks were deployed to tackle the thistle growth, which was already fairly extensive in a number of the beds.  Fortunately, our turnout was sufficiently large that there were enough of us to tackle it without the job appearing immediately daunting!  We were joined by another new member, Victor, who we were pleased to welcome along.

Although only sown for the first time last year, an impressive wild flower display was already evident, thus we took care not to trample the plants down as we worked.  It was fairly tough going at first with the heavy soil, but as we worked our way around the perimeter of the field, the increasingly softer ground made the task of thistle-pulling progressively easier.  Which is not to say that it wasn't hard work!

By the time that tea-time came around, we were rather grateful for the break, especially as the warm, sunny conditions had taken hold during the morning, making it reasonably tiring.

Refreshed, we pushed on through to our 12:30pm deadline and accomplished what we had set out to do.  The plant debris was removed to Lucille's car for transporting off for composting - quite a heavy load in the end!

We look forward to returning here in the future to help out again should our labours be required.  In any case, the site is well worth a visit during the summer months for the beautiful wild flower displays that are a great asset to the area.
-Andrew

We start at the weir at the back of St Helen’s Court and the vicarage. At this point the two branches of the Ock join together and flow into the Thames.

We follow the path between the two branches. There are many species of tree along the route, various types of willow, alder, silver birch, chestnut, poplar, aspen, oak, elder and guelder rose. On the right, there are trees planted by Green Gym in past years, which we are trying to nurture and keep alive. They were donated by the Woodland Trust – oak, beech, silver birch, willow, aspen, cherry and rowan. The vegetation grows very fast in summer – large quantities of nettles , rosebay willowherb, goose grass/cleavers/sticky willy, and comfrey followed by Himilayan Balsam. This is an invasive weed, which grows along and close to waterways and we wage annual war on it.

We pass a couple of donated and memorial trees on our left. Then, on our right, we come to an area where the Town Council, which is responsible for the path up to the middle bridge, has cut down a number of trees. Here, Green Gym has planted a memorial tree, a black poplar, for one of the Green Gym leaders who died suddenly just a few years ago. We have planted spring bulbs around the tree and spring wildflowers such as wood anemones, ramsons and bluebells around the area in general.

We now turn off to our right and walk back along the woodchip path, which curves around to meet the main path again close to where we started. Green Gym keeps this path clear and renews the wood chippings about twice a year. As you can see, the area gets very overgrown with nettles in Summer and Green Gym to clears circles around the young trees and cuts back a bit where the vegetation is overgrowing the path. It always seems that one minute the area is bare and the next it’s totally overgrown. Former Councillor and Mayor, Peter Green took a great interest in improving the Ock Path and planting trees and supported the setting up of Abingdon Green Gym about eleven years ago.

We retrace our steps along the main path and cross the middle bridge. The area narrows now as the two branches of the Ock get closer together. Birds you may see include the usual garden birds but there are also frequent sightings of kingfishers. Water birds include mallards, swans, coots, moorhens and great crested grebes. Bats also frequent the area at dusk and you may spot muntjac deer.

The path leads out to a green area. We turn right across a wooden bridge, and on to the footpath, as you will see, one of Abingdon’s worst litter blackspots, which leads to Ock Street.
-Eleanor 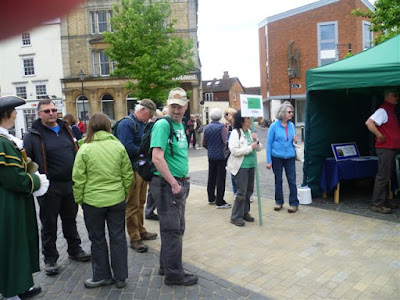 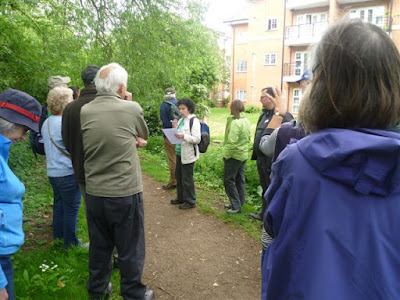 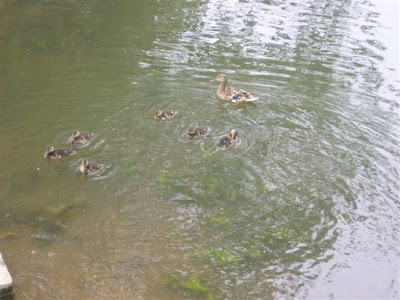 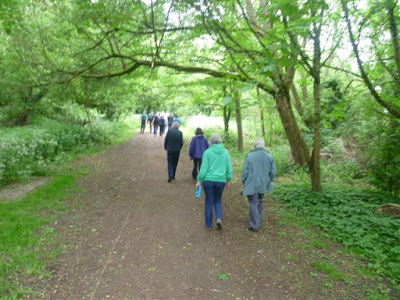 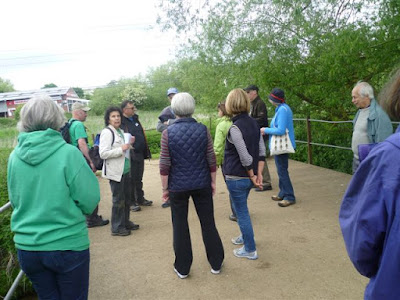 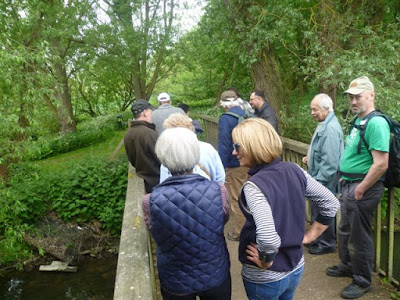 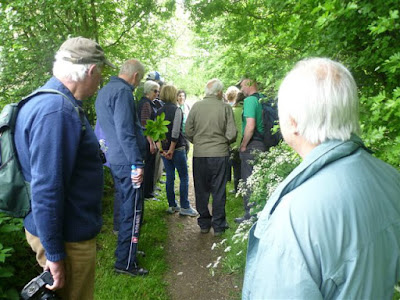 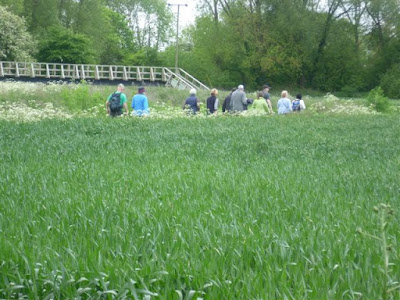 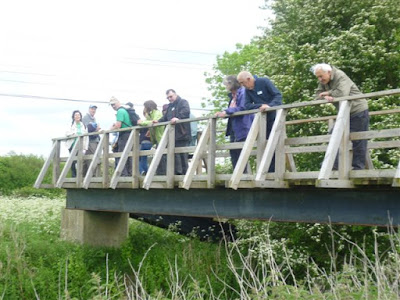 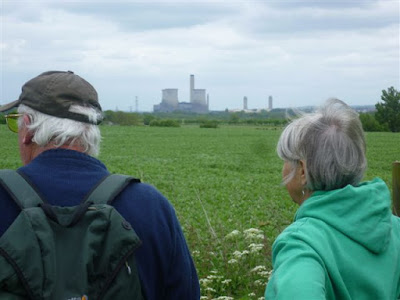 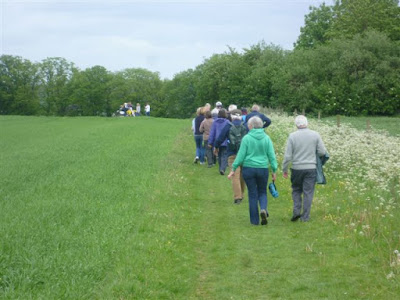 On Saturday, we were again working in Elizabeth Daryush Memorial Field on Boars Hill.  The meadow had been cut recently. The bulk of the hay had been picked up by the mower, there was plenty left behind to rake up by hand.  We could not quite finish this, as the field was just too large.

We continued grubbing out brambles and nettles to clear three patches for seeding with a wild flower mix.  We completed this for two patches, which was extremely satisfying.  Seeds scattered, we now look forward to seeing a beautiful mix of wild flowers emerging over the course of the year.

There was also a large pile of wood that needed shifting out of sight. These piles are useful as wildlife habitats as they gently rot down in the woods.

The orchids are doing well, and were given some space by removing the growth around them.


It was a pleasure, as always, to visit this site, and the weather stayed fine for the morning.
-Ursula 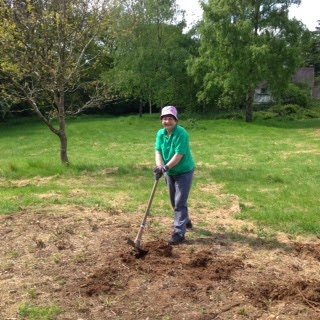 For today's Green Gym, the Abingdon team was led by Kevin. It was a joint meeting with the Sonning Common group and others came from Bicester and Newbury, so we were quite a big squad.

The job was unusually straightforward and consisted of clearing birch saplings and seedlings from a long section of heather. This was well established but was being threatened by a prolific invasion of birch from nearby trees.

Loppers and saws were the preferred tools. The work proved rewarding in terms of visible results during the morning, but it was hard on the back! The weather stayed fine, with only a little drizzle but some sun as well.
-Barry

For this session we ventured farther away than usual, to Withymead Nature Reserve near Goring. This is one of our favourite sites. It's just a pity it's about 20 miles away! We had chosen the right weekend as the Loddon Lilies, for which this riverside site is famous, were in full bloom.

Fifteen of us turned up and we were pleased to welcome a new member, Kristine, who had seen our group mentioned on the Cothill Fen notice board. It was also the regular Saturday for the Withymead volunteers.

The main tasks were to move earth from the nettley future wildflower garden and pond site to the area outside the Study Centre. Paving has recently been laid there and we needed to make a smooth slope up to the paved area. It wasn't easy to dig the stony soil and we had to hack at it with mattocks. In doing this we were asked to make south facing "cliffs" so masonry bees would be encouraged to nest there. We transported the soil in wheelbarrows and the Withymead volunteers set to work to make it into a smooth slope.

Some Green Gymmers went to another area to make a hedgehog house. This was done by making a wigwam of willow branches and covering it with conifer branches so the appearance was that of a small cone shaped leylandii.

The earth moving work was quite strenuous and we were glad when it was tea break time. Ursula had made a delicious carrot cake to fortify us.

After the break,warden Dorothy took us to see the Loddon lilies which, as usual were really spectacular. We also saw an "otter cam" attached to a tree by the river bank,  which has taken photos of an otter and cub. We returned through the woodland area, where they hope to replace the sycamores and horse chestnuts with native trees. Our tour was so comprehensive that, by the time we got back it was time to pack up and go home.
-Eleanor 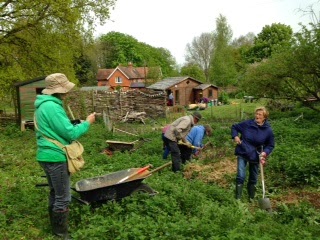 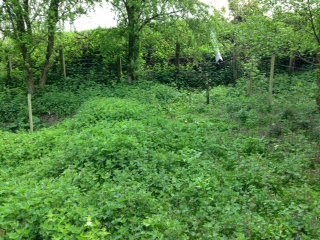 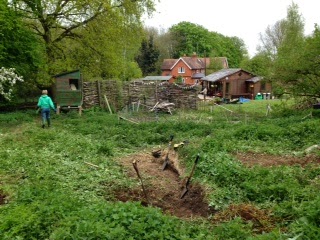