In addition to our winter programme, Abingdon Green Gym was invited to participate in water testing sessions at one of our regular work sites - Cothill Fen, and neighbouring Parsonage Moor.  A number of groups were involved in this operation including Berks, Bucks & Oxon Wildlife Trust (BBOWT), Natural England, Freshwater Habitats Trust and local volunteer groups including Friends of Cothill Fen and ourselves.

Four Green Gymmers (Eleanor, Sally, Adrian and Andrew) attended on a Monday, although the project was set to continue into the Tuesday, under the guidance of Dr Curt Lamberth - an ecological consultant who set up a testing facility on site to analyse samples gathered nearby.

The purpose of the testing was to analyse surface and groundwater right across the extent of the fenland, to map nutrient flows into, across and away from the site.  Considerable levels of  dissolved nutrients, most crucially nitrates and phosphates, have been observed in recent times, and these in particular can adversely affect the ecology of this locally rare habit.  There is considerable interest therefore in identifying the sources of these nutrients and better understanding water flows so that a plan to protect the fen can be developed.

We assembled at 10am and received instruction on how to conduct the sampling.  We divided into pairs or small groups, and were allocated sections of the site in which we were gather samples.  A sample pack was given to each of the groups - each consisting of five numbered sample bottles, syringes (to gather the water samples before decanting to the bottles), a hand-held GPS receiver (in order to accurately record the location of each sample on the British National grid), a record sheet and pen, a map of the site and a ruler/tape measure (to record the water depth where the samples were taken from).

After everyone was clear on what was required, we set off in different directions according to which sections of site we had been assigned to.  Samples were gathered, logged with some additional information including type of water - pond, puddle etc that they were gathered from, time of day and then returned to the base.  Dr Curt then began to analyse the samples in order to build up a database and ultimately a map of the 'critical' areas of nutrient build-up.
-Andrew

It was a dry and (relatively) warm start to our session at Jarn Mound and Wild Garden this Saturday.  We were met by Rachel Sanderson from Oxford Preservation Trust (OPT), who own and manage the site.  The first order of the day was to unload a number of holly plants and hawthorn and wild plum tree whips from Rachel's car, along with canes and spiral tree guards.

The tasks of the morning were then outlined to the sixteen green-gymmers and two additional OPT volunteers.  First and foremost, a hedge was to be planted along the Jarn Way road, on the border of the garden.  The planting plan was unveiled, with the holly divided into groups, and the hawthorn and wild plum to be used to infill the gaps between them on the roadside verge.  There were also some spaces in an existing hedge that required planting.

A second job which required a team of four volunteers, was to attach a wire mesh to part of the fence that runs parallel with the new hedge.  This was supplied by a local farmer who dispatched a roll of mesh shortly after we arrived.  This was unrolled and attached to the wooden fence with secondary sections constructed around the new holly plants, in this instance attached to wooden posts that were erected during the morning.  The wire mesh, and also the tree guards were put in place to prevent muntjac deer from getting in and attacking the hedge and stripping the bark from the young trees.

At 11am we took our usual tea break.  Today happened to coincide with Lesley's birthday and she had brought along some chocolates to celebrate. Together with Eleanor's chocolate brownies, we were rather spoilt.  We of course sang 'Happy Birthday' to Lesley in finest voice before getting back to our tasks.

While the hedge was being completed,  the additional job of removing some cut vegetation from the mound itself was undertaken.  This is a job that we begun on our last visit and will occupy us on our next session here in a couple of weeks time.  A pile of brash was created at the foot of the mound with the intention of creating a bonfire upon our return.  Hopefully the weather will stay dry for the occasion and the fire will roar!
-Andrew

This week we returned to Boundary House Fen at Frilford Heath Golf Club.  Earlier in the week, the golf club had been awarded the Sports Turf Research Institute Golf Environment Award 2017 for the best environmental project on a golf course.  This was an acknowledgement of the recent work of the ground staff.  It was also a significant vindication of our ongoing efforts here; a site we have visited regularly since 2011.  During this time a considerable transformation has occurred, with a large area of the fen having been restored.  A number of key indicator species have observed, thus preserving its Site of Special Scientic Interest (SSSI) status.

We met as usual at the main golf club car park before dividing into as few cars as possible for the journey along the road to the groundsman's area.  We were pleased to welcome a new member, Rosie, along for the first time. We were also pleased to find that the gate into the site had been unlocked for us on this occasion unlike on our previous visit!

We numbered 18 in total today, including Judy Webb and Alison Muldal, representing Natural England, who oversee our work here.

After the walk across the frosty fairways and a brief warm-up, we set about our tasks which were to continue raking the cut reeds and to transport them via pitchforks and drag-bags to piles on the perimeter of the fen.  There were also some stray tree branches and logs to gather up and move away from the wetland habitat.

Keen to keep busy and stay warm, we worked hard to get the job finished, which was a realistic prospect given our large turn-out.  Oranges and bananas were offered at the tea break along with the usual biscuits - much-needed half-time fuel given the chilly conditions and fast-pace of the morning!

Another successful session here and we look forward to returning and continuing our jobs at this now award-winning site in the near future!
-Andrew

Posted by Andrew at 9:27 PM No comments:

Our hard work at Frilford Heath Golf Club acknowledged with an award!

Abingdon Green Gym's hard work over the past six years at Boundary House Fen has been acknowledged with an award.

Frilford Heath Golf Club won a Sports Turf Research Institute Golf Environment Award 2017 for the best environmental project on a golf course – namely the fen restoration work at Boundary House Fen. 50 golf clubs from around Britain were nominated for STRI environmental awards, and there were winners in 3 categories.

From the STRI website:
"Frilford Heath Golf Club amazed with their extensive fen restoration works, a result of true determination. Their efforts have seen the return of a number of fen indicator species which haven’t been seen for many years. In partnership with Natural England, and with the help of Abingdon Green Gym, the greenkeeping team have worked to enhance this nationally important habitat for the future of the SSSI (Site of Special Scientific Interest)."

The link to the full article can be found HERE
Posted by Andrew at 10:00 PM No comments:

We produced about 60 jars of marmalade in just one day which is a record.  It all got too much for the cat who sought refuge in a basket.

We will be selling them for £2 a jar.  We are hoping that Green Gymmers will buy 5 jars for £10 and either use it for themselves, or sell it on.  Sally will be collecting the money.  Some will be kept back for fun in the car park.
-Ursula 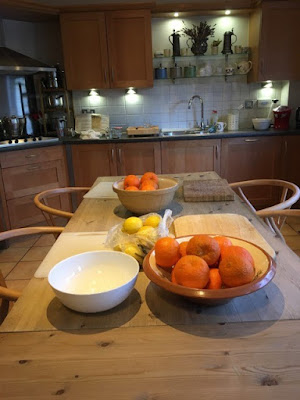 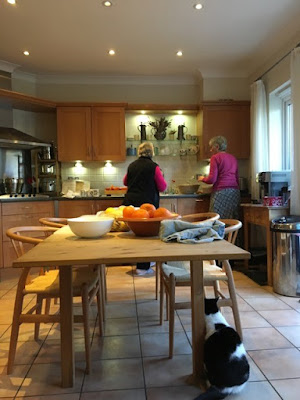 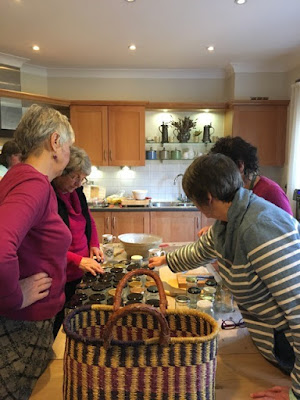 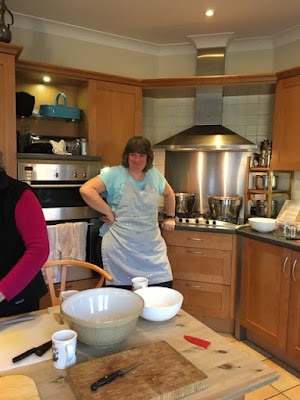 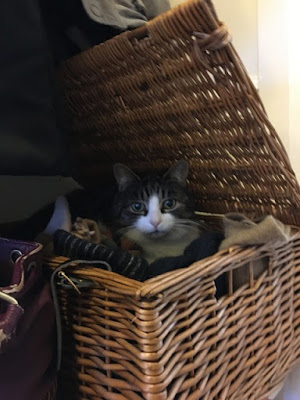 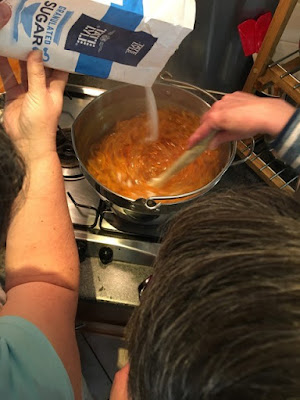 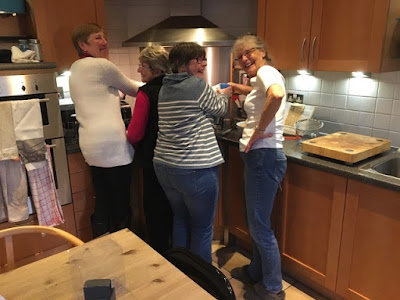 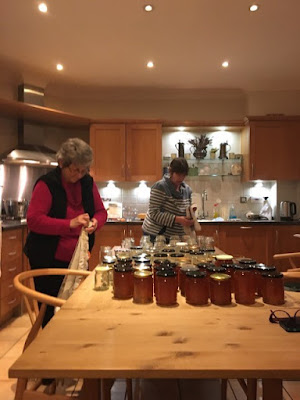 Posted by Andrew at 9:09 PM No comments:

Ursula had bought Seville oranges and other key marmalade ingredients.  The Marmaladies (Ursula, Eleanor, Carolyn, Kate, Lesley, Janet and Sally) met at 9.30 and set about cutting the oranges in half and squeezing them along with the lemons. 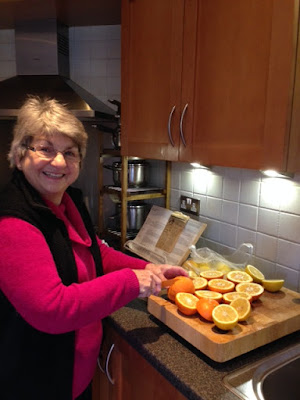 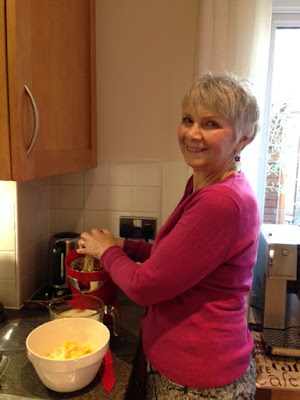 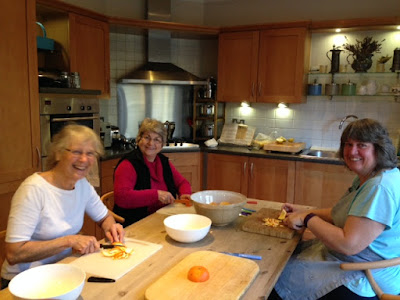 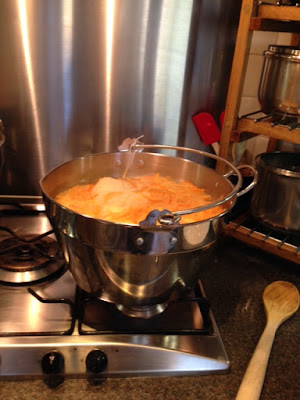 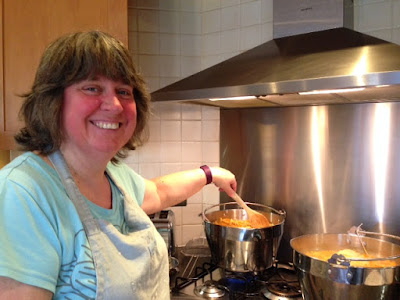 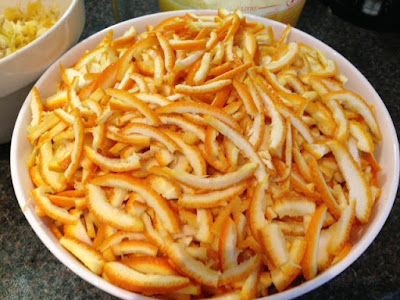 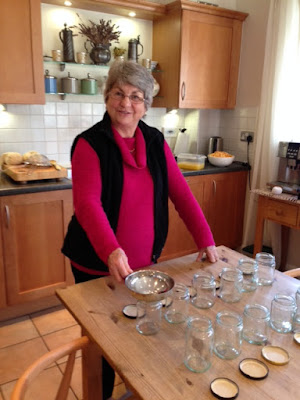 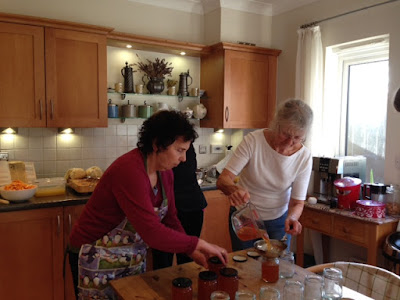 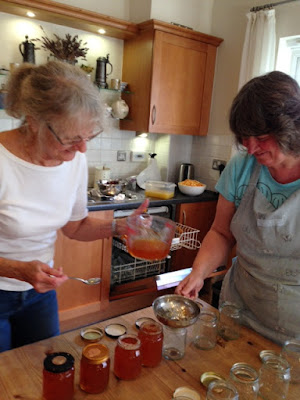 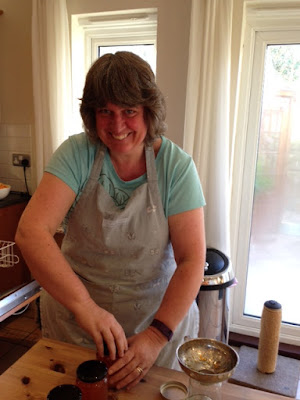 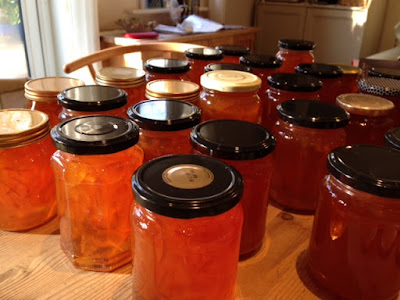 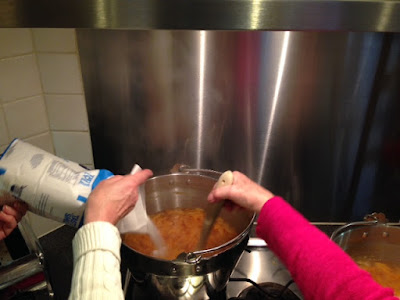 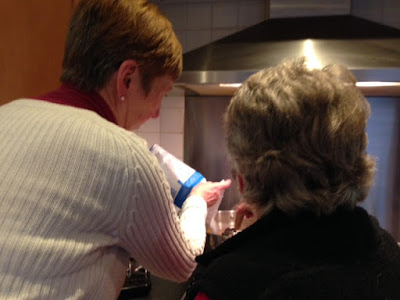 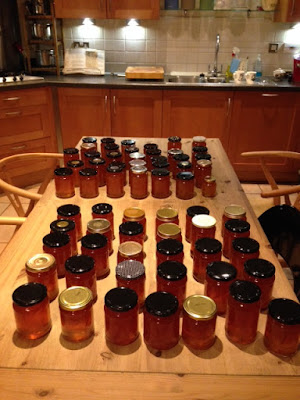