A beautiful spring morning greeted the 10 or so Green Gym volunteers who met for Saturday's session.  The main task this time involved litter picking along the Tesco end of the Ock River Walk.  Some additional work was also carried out, tidying up the woodland adjacent to the river, and clearing dangerous tree branches in preparation for Himalayan Balsam pulling later in the Spring/Summer.  The banks of the river tend to become rather overgrown with this invasive non-native plant later towards the summer months which we attempt to eradicate due to it suffocating the native wildlife.

From the outset it was apparent that there was an almost overwhelming amount of litter to be cleared from the area.  However, due to the hard work of all involved, good progress was made throughout the morning and several bags worth of recyclable and non-recyclable waste were collected, much improving the appearance of this busy area for at least the immediate future. However, there is little doubt that the Green Gym will return again to repeat the exercise later in the year!

Today we joined the Barton Fields Green Team to help with various tasks on the site. We split up into small groups, with some of us weeding the wild flower plots we had planted last year, some scalping the turf under the trees ready for new planting or fetching water for the wildflower plots, while others worked around the ponds or put up nesting boxes for the birds. At the end of the session we scattered seeds such as meadow cranesbill and field scabious on the wildflower meadow.

We have enjoyed helping over the past few years to create and maintain this wild flower meadow and pond area in Abingdon, which will encourage and conserve a large variety of flora and fauna.
-Eleanor
Posted by Andrew at 11:50 AM No comments:

Here are a few photos from the pond digging sessions at Drayton Road Allotments: 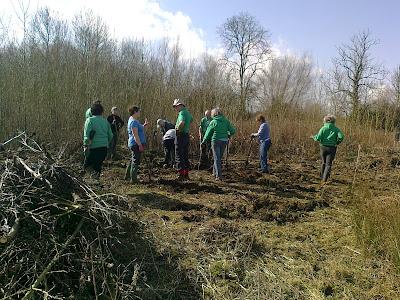 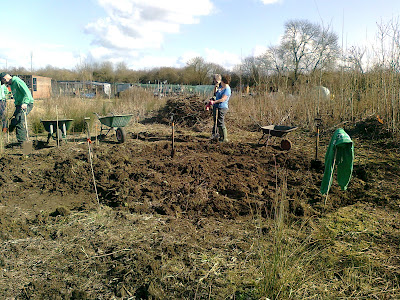 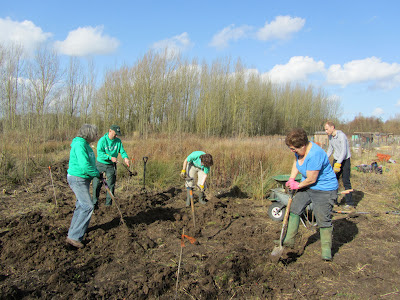 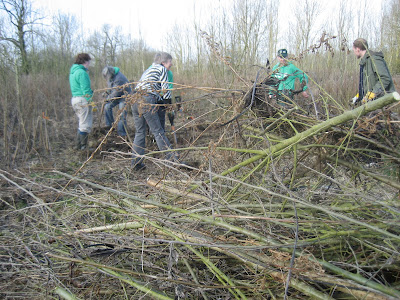 Posted by Andrew at 8:22 AM No comments:

This Saturday saw our second visit to Drayton Road allotments to continue digging a pond. Last week we had made good progress in clearing the trees and preparing the site and we had even begun digging.

This time, with fewer able bodied diggers, our progress seemed discouragingly slow, and on top of that, our wheelbarrow got a puncture. We kept at it, however, having voted down suggestions of bringing in a mechanical digger, and with more womanpower arriving after the break, the task seemed less daunting.

Just before the session was due to finish we finally struck water! The water table is alarmingly close to the surface on this site and many allotment holders have dug wells on their plots.

The finished pond, which will not be lined, will be filled from below as well as with rainwater when we get some rain. We will need to assign a couple more sessions on the new programme to finishing the pond.
-Eleanor
Posted by Andrew at 4:20 PM No comments:

This Saturday we embarked on a new project, namely, digging a pond at the Drayton Road allotments at the southern end of Southern Town Park. Ten Green Gymmers turned up for the session and were joined later by Mary and Tony de Vere from the allotments committee, who had suggested the project.

The idea of the pond was to increase the biodiversity of the area and attract friendly, pest devouring wildlife such as frogs and toads. Firstly the area needed to be cleared of poplar saplings, which also meant digging up the roots in the actual pond area, a job requiring persistence and stamina, and cutting back the trees on the margins. There was also a certain amount of rubble and assorted rubbish to be cleared away.

We were pleased by our progress and after raking away the surface debris we were able to start on the actual digging. We carted away the soil in wheelbarrows to a plot which is prone to flooding and were grateful for a couple of extra barrows lent by other allotment holders. Next week we will continue with the digging and hope to finish the pond.
-Eleanor

photos to follow...
Posted by Andrew at 8:28 AM No comments: