This was our annual visit to Barton Fields to assist with the raking of the wildflower meadow.  The meadow covers a significant proportion of this nature reserve and is cut once a year - during the late summer, by a local farmer using a tractor mower.  We help David Guyoncourt and his 'Green Team' volunteers from the Abingdon Naturalists Society who manage the site.

The meadow had been cut on the previous Wednesday, with the Green Team beginning the raking operations on the Thursday and continuing into the Friday.  During this time, the hay had been raked into small, loose piles across the entire meadow in order to dry out, and some of these had been consolidated into larger piles at the field margins. Our task was to continue to transport the rakings away from the meadow to ensure that the ground is kept in optimum condition for the next season.

A good amount of Green Gymmers, numbering around fifteen, turned up for the occasion, assisting with a smaller number from David's group.  We assembled outside the Sophos building in Barton Lane, ready to transport tools and tea-kit to the work location. The weather was fine and dry, if a little overcast, unlike the previous day which had been hot and sunny.  Once assembled on-site, David briefed us on the task and we set to work.

The majority of us either pitchforked or transported the raked hay from the meadow to the larger piles using drag-bags or large sheets.  A smaller team raked-up residual hay, remaining on the ground after the main collection and some others conducted a litter-pick.

On the stroke of break-time at 11am, we completed the removal of all the hay to the larger piles. Good work indeed!

Following refreshments, we were mainly concerned with collecting up the residual hay, while some of the group changed task and went over to the Willow Carr area of the field to pull up some remaining Himalayan Balsam which had been spotted growing close to the Mill Stream.

During the raking operations, many common toads were spotted and some grass snake activity was also observed!  Throughout the actual mowing, the cutters had been set fairly high as to avoid disturbing wildlife, and this appeared to have been a success.

It was at around midday that extremely dark clouds of a threatening nature had begun forming in the vicinity! Sure enough, thunder and lightening quickly followed, along with some heavy rain.  We were forced to abandon our session early and transport our tools back to Barton Lane for a quick getaway!

It had nevertheless been a successful morning and the main objectives achieved. Hopefully the weather will hold out for a little longer next time however!
-Andrew

The Abingdon Green Gym programme for Autumn 2016 has just been published - see below or click HERE for a larger-text pdf file version. 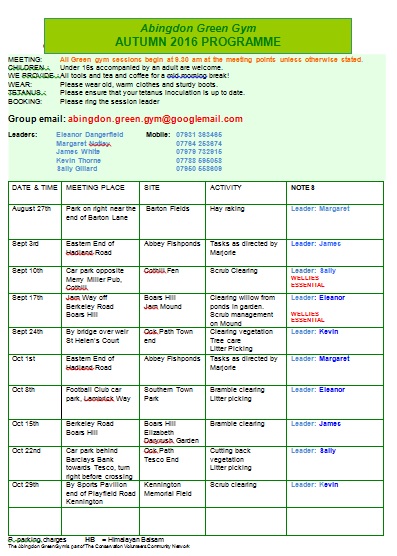 For the third summer in a row, we met at Caldecott Primary School for a session of grass raking - following the annual cutting of the wildflower meadow.

Our task was once again overseen by Marion Owen from the Abingdon Carbon Cutters group, with five or so of their members working alongside us for the morning.

The day was off to a dry start, but after some recent rain, the ground was a little wet, with many slugs and snails evident. Some common frogs were also spotted - finally some rather ideal weather for our amphibian friends after the recent drought conditions.

As previously, the rakings were transported via some builders' drag-bags from the meadow area to the compost heaps close to the gate of the field.

Some advice was taken from members of the Carbon Cutters on how best to construct these heaps to encourage the material to break down efficiently.  Layers of new and old cuttings were thus alternatively piled on, sandwiched between dampened cardboard and other green waste.  Some of the rakings were put to use this way, but given the sheer volume of grass, the surplus was piled separately and to be added-in at a later time.

In common with last year, we were finished before our usual 12:30pm deadline, such was the speed at which we worked along with the effort put in by all the volunteers.  A job well done.
-Andrew

Posted by Andrew at 1:19 PM No comments:

This was a week off in our otherwise busy programme - for the annual summer picnic.  As well as being a vital social gathering, it is timed to coincide with some of our members' birthdays, including those of Ursula and Eleanor.

The venue for the event was our newest work site - the Wild Garden in the shadow of Jarn Mound at Boars Hill.  It had been decided that the location was ideal when we had our first work party here back in the spring and it was certainly nice to be able to enjoy this wonderful environment that we have been helping to renovate.

We gathered somewhat later than would be usual for our work parties - at 11:30am, and assembled a picnic table with chairs around it.  All the Green Gymmers present contributed food and/or drinks - a carefully co-ordinated operation overseen by Carolyn who unfortunately was unable to attend due to a family commitment that had come up at short notice. Despite this setback, nearly 20 hungry members turned and therefore an impressive spread was laid upon the table.

In order to work up an appetite for such a  feast, a walk was taken around the site to admire our previous efforts and to get some idea of what work would need to be done on future visits. The tour was concluded by climbing the mound itself to see if we could glimpse any kind of view of the surrounding area, however, with the tree growth all we could really see was the canopy in all it's glory.

To the main event then! We began with tea and coffee/soft drinks and proceeded onto the savoury dishes. An intermediate course of cheese was then enjoyed before dessert was served and some time was taken to relax and enjoy the occasion and the great company!

The weather was perfect, thus a wonderful time was had by all.  Back to work next week though. Onwards and upwards...
-Andrew

Posted by Andrew at 9:10 PM No comments:

Green Gym arrives at Abbey Fishponds, Abingdon. It’s a fine warm late-summer morning.  James is leader and our tasks are to get rid of as much Himalayan Balsam as possible and clear the paths of encroaching growth. We will be working with members of The Earth Trust. Marjorie, the site warden indicates where some of the jobs are. 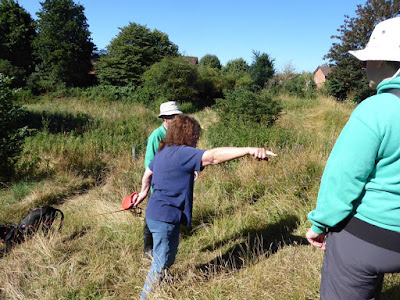 Lesley spots a Himalayan Balsam and out it comes! They are hard to see under these conditions when the reeds and other plants have grown so high. 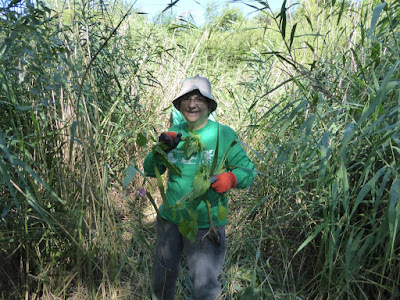 The reason for removing them is that they are prolific seeders and will soon under the right conditions completely colonise an area with consequent loss of native wildflowers and the wildlife that is sustained by them. They were introduced by the Victorians who saw them as a cheap and effective way of having exotic brightly-coloured plants in their gardens!

Graham is well-equipped with a slasher to do some cutting-back. 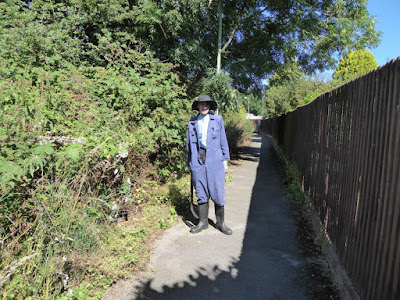 Dieuwke uses loppers for higher up. 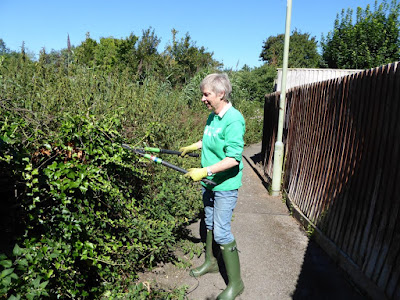 At last! Coffee time for the combined group. The little bit of shade is very welcome. 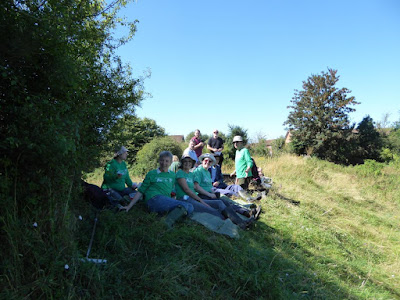 Late-summer berries and wildflowers abounded throughout
the fishponds site. Loads of nettles and reeds and some elderberries. 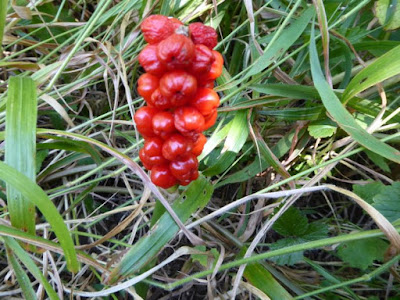 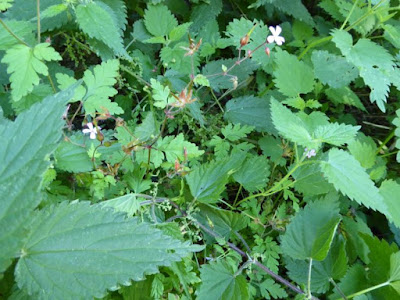 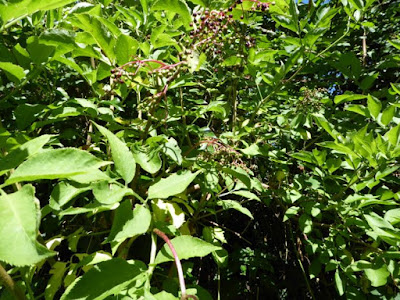 Too far away to see who they are. Two Green Gymmers hunting the Himalayan Balsam. 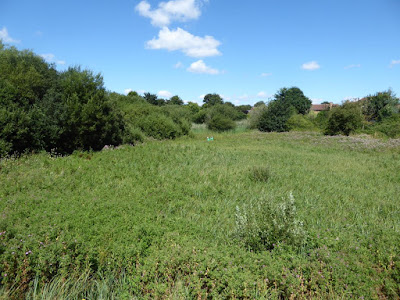 At the end of the morning we return to our base. The cat has been sitting with our bags but doesn’t seem too pleased to see us come back. 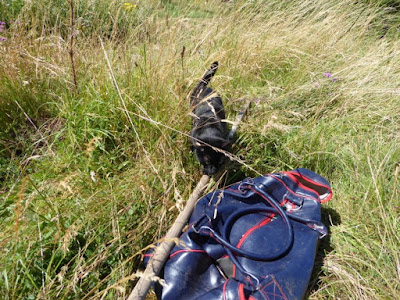 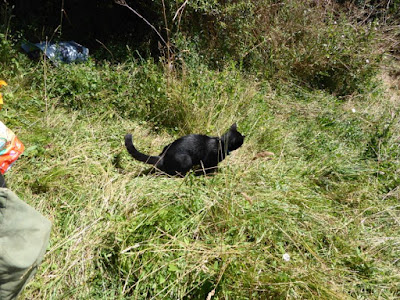