Despite the windy weather there was a good turnout for the session at the Tesco end of the Ock Valley Walk.  We proceeded to our usual spot to commence the work programme.

Litter picking is one of the main tasks on this stretch of the path and the pickers collected many bags of assorted recyclable and landfill rubbish.

Brambles were cut back from the main path and were easier to see now that the summer growth of nettles and other foliage had died back.

With the rain keeping off and our backs to the wind we had our well deserved break of cake and hot drinks.

For the second part of the session, we continued with clearing and stacking the fallen branches, most of it residue of vegetation that was washed down from the flooding in the winter of 2013/14.

Also we diverted our attention to the early signs of Himalayan Balsam shoots, emerging from the undergrowth. Although very small, their distinctive leaf (once you zeroed your eye in) could be plucked out and disposed of. Hopefully by doing this now it will diminish the spread of HB and give us a fighting chance against it later in the season.
-Kevin 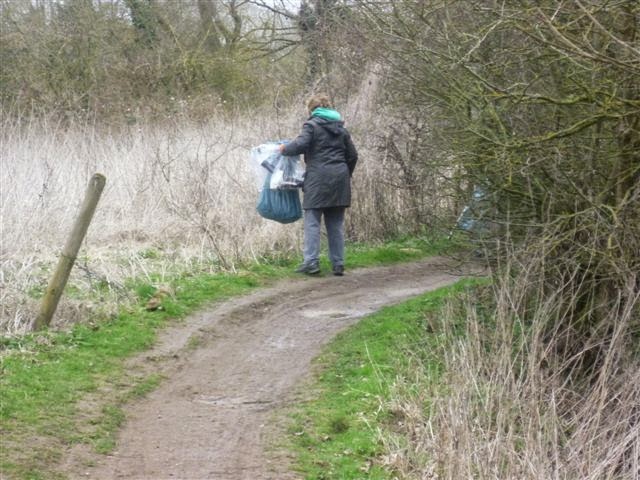 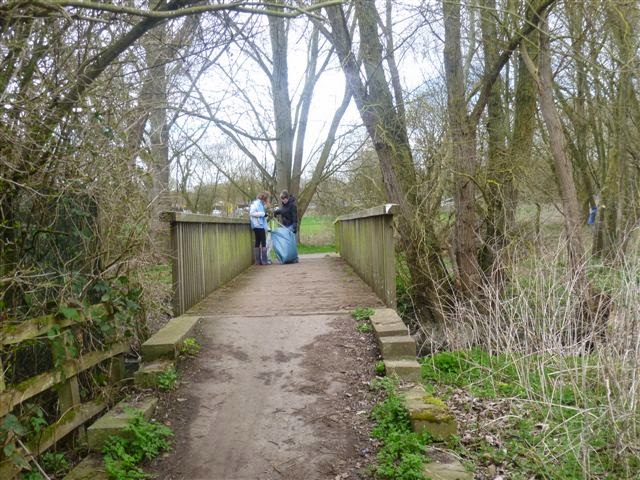 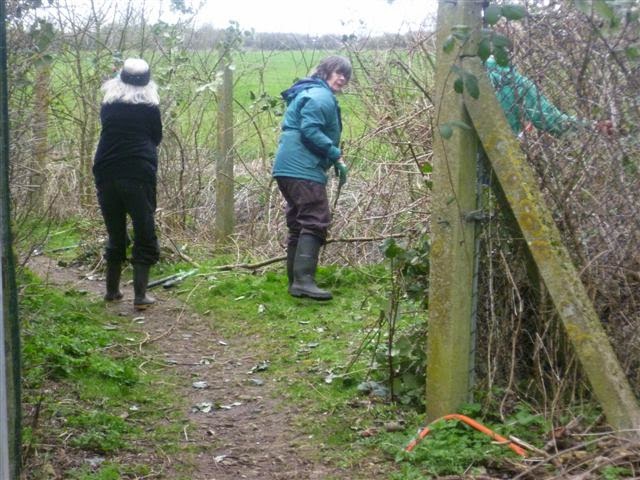 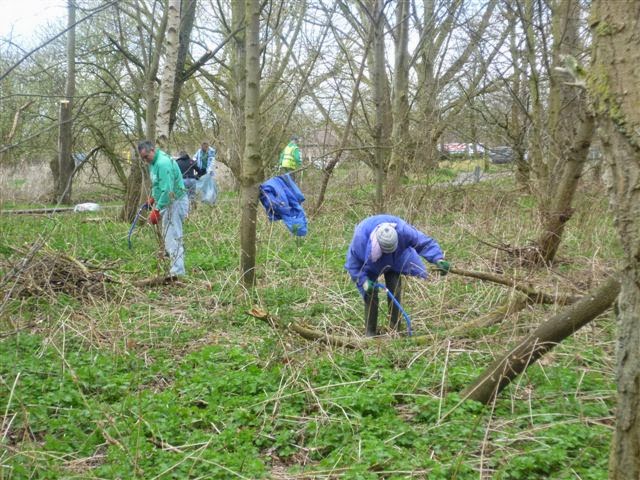 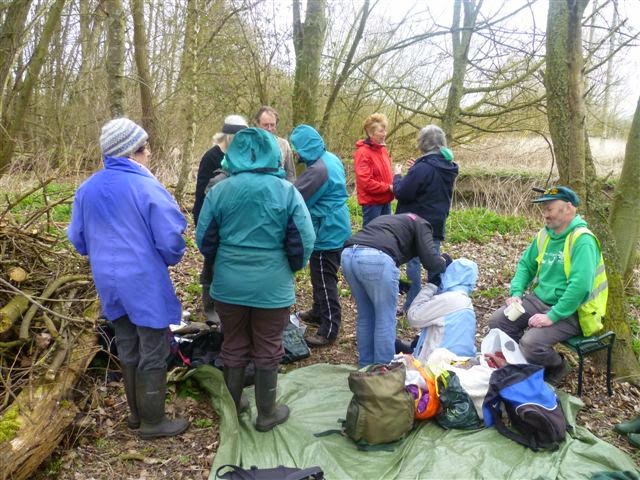 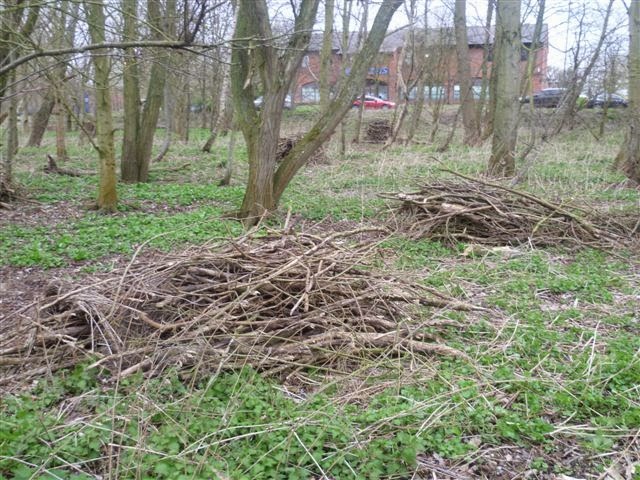 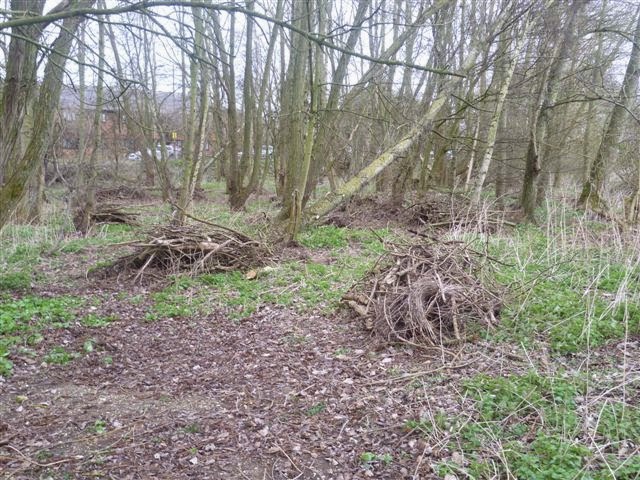 This was the second of our two Spring visits to the Town end of the Ock Walk and this time there were more than twice as many of us as the previous week.

Some people went to finish off the work on the woodchip path. With two wheelbarrows this time as well as Colin's trolley this didn't take too long.

Other tasks included getting rid brambles that were beginning to sprout in some areas and to trail through trees at one end of the woodchip path, inspecting the young trees and clearing the area around them and making piles of dead wood and fallen branches. There was some litter to be cleared, though not so much as usual, as the council contractors have been sending someone to clear it in the past few weeks.

The tea break was made more special with a delicious cake that Petra had made for us. Then it was back to work, with a lot more work to be done on the brambles. We also decided to rake the dead vegetation off the ground in the young tree area to encourage new growth to come through and to clear away an old abandoned tent that had been lying around all Winter.

Our next visit will be in the Summer, to tackle the inevitable Himalayan Balsam.
-Eleanor

The new Spring programme for 2015 has been issued, and can be viewed below.  A larger PDF version can be found on our website HERE 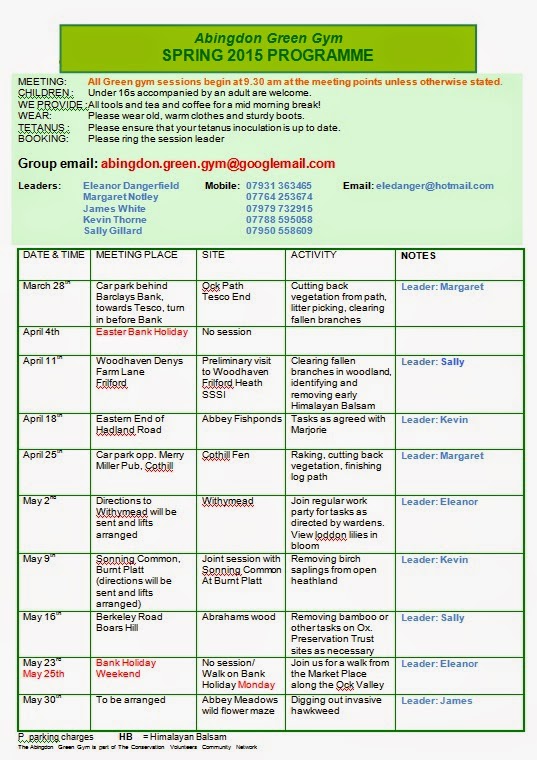 Posted by Andrew at 2:01 AM No comments:

Seven of us, an unusually small number, assembled for the first of two sessions of renewing the woodchip path at the town end of the Ock River Walk.

We had decided to leave the path work until March in case there were winter floods as there had been for the past two years. The Town Council had left us two large piles of woodchip at either end of the path and some of us began spreading it on to the eastern end path and shovelling it into our one wheelbarrow while the others began raking twigs from the path and roughing up the surface so the woodchip could bed down better.

We were very glad when Colin arrived with his trolley, enabling us to shift a lot more. We made remarkable progress considering there were only a few of us and by the tea break we had progressed more than half way. Having exhausted the first pile, we decided to move to the other end of the path.

By 12.30 there was only about one fifth of the path left to do next week, though there would be other tasks such as removing brambles and clearing fallen branches. The earlier sunshine had given way to cloud and a chilly wind so we were glad to head home, satisfied with our morning's work.
-Eleanor

Posted by Andrew at 2:26 AM No comments:

A cold but sunny morning we met on Boars Hill to work in Elizabeth Daryush Memorial Field.  This has been bequeathed for the enjoyment of the public to the Oxford Preservation Trust by the poet, Elizabeth Daryush who lived there until her death in 1977.
The field is ringed by mixed woodland and has a large pond at the upper end nearest the house.  It is easy to imagine the poet drawing inspiration from this landscape and her walks in her extensive grounds.  However, she was also conscious of her privileged position which is evident in this poem called “Still Life”:

Through the open French window the warm sun  lights up the polished breakfast-table, laid round a bowl of crimson roses, for one —  a service of Worcester porcelain, arrayed  near it a melon, peaches, figs, small hot  rolls in a napkin, fairy rack of toast,  butter in ice, high silver coffee-pot,  and, heaped on a silver salver, the morning’s post.
She comes over the lawn, the young heiress,  from her early walk in her garden-wood,  feeling that life’s a table set to bless  her delicate desires with all that’s good,  that even the unopened future lies  like a love-letter, full of sweet surprise.

The poet is not very widely read now.  She also had the misfortune to be the daughter of Robert Bridges (1844 to 1930), who became poet Laureate in 1913.  Robert Bridges was a physician, who retired at 40 to write poetry.  He lived in the house on Boars hill which Elizabeth and her husband made their home too.

The field, which probably has a rich diversity of wild flowers, has a mass of brambles and unwanted saplings encroaching on both the pond and the open space.  We spent the morning grubbing out brambles, and cutting back the encroaching scrub.

Refreshments, provided by Dieuwke, of tea, coffee and chocolate cake were most welcome after the tough work.
-Ursula 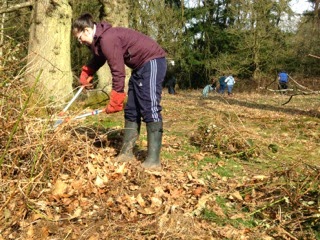 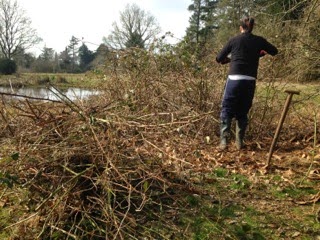 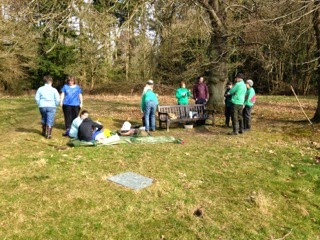 We met at the sports ground in Kennington for our annual visit to Kennington Memorial Field, where we go to help cut back thorny scrub which is encroaching on the pasture.

One side of the valley had already been cut mechanically so we set to work on the other side while Kennington volunteers tried to get a bonfire started at the bottom of the field. It was prickly work and we needed strong gloves to withstand the thorns. By break time, we had accumulated some satisfactory piles and started to carry them down to the bonfire, which was reluctant to get started.

After our tea break in the comparative luxury of the sports pavilion, with actual chairs to sit on, we carried on cutting and carrying the piles down to the bonfire, which had at last begun to blaze merrily, although a fine drizzle had started to fall. Soon it was time to persuade people to stop cutting and help carry the remaining piles down to the bonfire. There was certainly a lot left for the Kennington volunteers to burn but it was the end of our session, so we had to leave them to it.
-Eleanor