In recent years we have enjoyed our Christmas meal at the Merry Miller pub in Cothill.  This year was no exception, the difference being that there was no session at the nearby fen beforehand.  Instead we assembled in our clean clothes, a week later than the same occasion last year. The idea was to take a leisurely stroll around another local nature reserve, Dry Sandford pit in advance of lunch.

Upon meeting in the pub car park, the day took rather a soggy turn. As the rain lashed down, anoraks and wellies were donned and umbrellas brandished. While a minority took refuge in their cars, the hardy remainder began their stroll up the road to the pit. We were lucky to have an expert on hand - Alison Muldal of Natural England and supervisor of many a Green Gym session over the years. Alison imparted her broad knowledge of the fenland environment and a little of the wider habitat upon the group as we took our tour around this former quarry.

We have worked at this site before - under the direction of the Oxfordshire Geology Trust. During this occasion, back in 2013, we carefully removed vegetation from the old quarry faces in order to expose the sedimentary rock formations. The whole area was once a tropical sea - hard to believe during the cold winter weather, but the evidence is there with shells and many fossil remains from this era. Nowadays, solitary bees and wasps along with rabbits are more likely to be resident than coral and exotic crustaceans.

The walk lasted an hour or so, before we made our way to the pub to commence festivities. There we met with our rain-dodging comrades and a few other latecomers. The first drink was provided courtesy of the group's coffers, thus an orderly queue was formed at the bar before taking our seats. Kevin and Carolyn arrived last of all, bringing the headcount up to sixteen. They also brought some crackers, which injected a sense of seasonal jollity. Kevin then gave his chairman's speech, thanking everyone for their hard work throughout the year. The food arrived a little later and was of the usual high quality that we have come to expect from this establishment.

We wended our merry way home from the Merry Miller in the early afternoon and will reconvene back in Abingdon for the AGM on 12th January 2019.
-Andrew

Our new programme for Winter 2019 has now been published. See below or click HERE to open a larger pdf version (opens in a separate window). 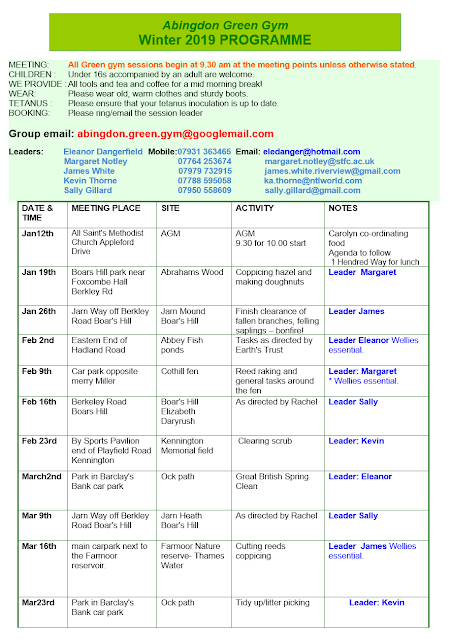 Posted by Andrew at 6:30 PM No comments:

For our last session of the year, we met at the car park opposite the Merry Miller pub – the venue for our Christmas lunch next weekend – and made our way down the path armed with hard hats, bow saws and loppers to Cothill Fen. The session was led by Kevin, with Judy Webb from Natural England instructing us with the morning’s tasks.

As we came upon the fen, it was quickly apparent what a change had taken place since the last time we were here at the end of September. Natural England volunteers had done a huge amount of scything of brambles and general clearing and Adrian had built two reed causeways across the fen, which had filled out nicely with water. The original National Trust post from 1916 had also been rediscovered and placed next to the gate onto the fen.

In a change from our usual fen-work, there was no raking today. Instead we were to stick to the boundaries on both sides of the wet area continuing to cut back the hazel coppices, holly and other growth. It was also discovered there was a spindle tree which might be allowed to flower given enough light.

It turned out to be quite a hair-raising first half, with tall growths of hazel being cut down, and ‘timber!’ shouted at regular intervals. Thank goodness for our hard hats! But then: disaster. When chopping down a coppice next to the spindle tree, the spindle itself fell sideways and it was discovered it was rotten at its base. With a half cut tree next to a precariously balanced spindle, Judy stood guard to warn walkers of the impending danger until help could arrive in the form of Judy’s colleague, Steph.

We had a lovely tea break, where Kevin presented recently engaged Andrew and Joanna with a card. Very touching! After some considerable wedding talk, we then set to work, mainly on the other side of the fen, to further clear coppices and undergrowth to make way for wild flowers. There we discovered King Alfred’s Cake, yellow stagshorn and clustered bonnet fungi, plus a medium-sized frog was spotted in the leaf litter. Judy was pleased we’d piled together the dead wood as it provides vital habitats to insects, which means more birds. She pointed out that in any woodland about half the wood should be dead, as 90% of the biodiversity lives in that wood.

Sunshine broke out intermittently through the clouds during the course of the morning, and it was only as we arrived back at our cars that a gentle patter of rain started up. All in all, a great last session to the year!
-Joanna

There was barely a golfer in sight this rainy morning, proving the 15 green gymmers that turned out for today’s session back at the fen within Frilford Heath Golf Course are a much hardier species! James led the session along with the project manager, Rod d’Ayala and Alison Muldal and Judy Webb from Natural England. We made our way from the meeting point laden with rakes, pitchforks and other equipment where Rod was already to be found raking.

The morning’s task was to continue the good work from the last session - raking the cut reeds and sedge that had been taking over in the calcium rich ground of the calcareous fen into the stream that runs through the site. The purpose of this is twofold: to raise the stream bed, enabling the water to spread out over the fen, and also to rot down in the water, the bacteria from this process converting the nitrate to nitrogen. Clearing the reeds and sedge makes way for rare species such as Grass of Parnassus, Devil's-bit Scabious, Narrow-leaved Marsh Orchid and Marsh Helleborine to thrive in this unique habitat.

There’s always the risk of ‘soggy foot’ when working at the fenland sites, and on this occasion it was Andrew who went in over his boot in the first half of the session. There’s always one!

By tea break we had made considerable progress and Rod was very pleased, saying with all the work that’s been done over the last few years we’ve taken the site back to how it would have looked eighty years ago before trees started encroaching. He gave a rallying cry, encouraging us to keep up the good work.

The second half of the session was mostly spent tidying up twigs and branches from the fenland, to make it easier for raking next time in the spring, and also consolidating the piles of branches from previous sessions. We’d made such good progress that we were able to finish half an hour early. There was no sighting of the medium-sized frog on this occasion but we found a cluster of earth star fungi and made our way back to the car park happy with our work.
-Joanna