Showing posts from May, 2013
Show all

Fun in the Park and new summer green gym programme 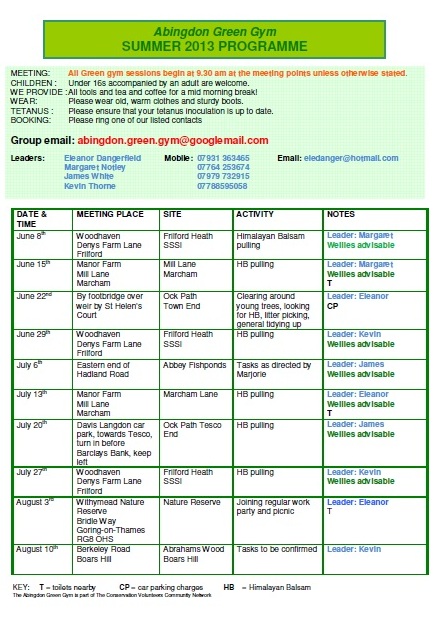 Tomorrow (Saturday 1st June), the annual Fun in the Park event will be held in the Abbey Grounds, Abingdon.  As usual, the green gym will have a stall at this community-led fete between 11am-3pm.  More information can be found on the  Abingdon Town Council website In addition, our new green gym programme for summer 2013 has just been published. Click here to view. -Andrew
Post a Comment
Read more 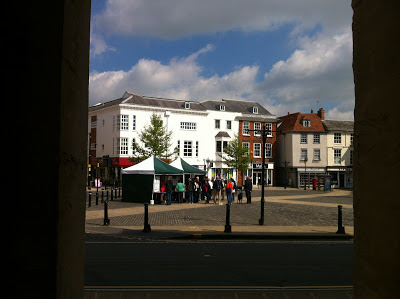 For the Bank Holiday Monday, a programme of free walks was organised by various Abingdon groups, all starting at the market place.  Included among these was a tour of the Ock Valley Walk, led by one of our session leaders, Eleanor.   The Ock Valley Walk is one of our green gym work sites, so as well as enjoying a pleasant stroll along this beautiful route, the aim was to show participants the work that we do there along with providing some further information about the history and nature of the areas visited. Registration for the walks began at 10am and the group of 11 people and a dog left at 10:30am.  The walk was conducted at a leisurely pace and was an interesting social occasion as well as being an opportunity to get outside and enjoy the beautiful weather.  Many participants were local to Abingdon, but we also had walkers from as far afield as Newbury. Eleanor gave a brief talk at the start of the Ock path about the route and the wildlife to be found there and proceeded to
Post a Comment
Read more

A few photos from our German friends... 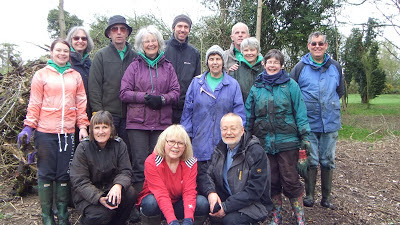 Next Session 18th May - Cancelled

By Andrew - May 16, 2013
Due to circumstances beyond our control, the next scheduled session for this Saturday 18th May at Cothill Fen has been cancelled.  There is also no session the following week due to it being a bank holiday weekend. Our next official activity will be the Fun in the Park stall on June 1st. -Andrew
Post a Comment
Read more 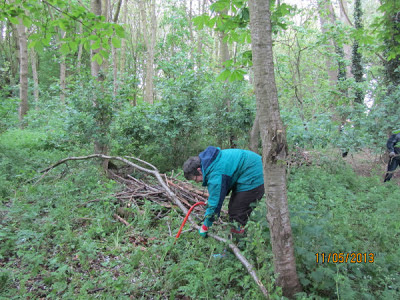 Stonehill House, on the Southern edge of Abingdon, was a new site for us. Our planned visit in March had been postponed but at least the weather was better than on that date, though certainly not perfect. The current owner of Stonehill House is keen to have community groups working there and as well as aiming to make the grounds a haven for wildlife there are ongoing gardening and art projects projects and a beautifully restored barn for events and courses. Our tasks were to remove tree guards from young trees and to tidy up the woodland. We split into two groups with one group in the woodland clearing fallen branches, making habitat piles and cleaing vegetation from the informal footpath through the wood and the other group setting to work on the tree guards.
Post a Comment
Read more 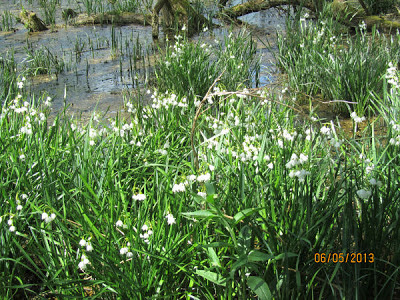 On Bank Holiday Monday, Sally organised a return visit to Withymead Nature Reserve on the outskirts of Goring, where we had been for the joint Green Gym session with Sonning Common in April. This time it was not to work but to see the Loddon Lilies in full bloom. The Loddon Lily or Summer Snowflake (Leucojum aestivum) is a rare plant found in only a few areas of Southern Britain. It was first identified growing by the River Loddon in Hampshire, hence its name, but Withymead has the most extensive area of these plants in the country. It resembles a taller, larger snowdrop, with a distinctive green spot on the outside of each petal. There were twelve of us on this visit, including two German visitors, who have been helping Green Gym during their house exchange holiday in England. We were given a tour of the reserve by Dorothy, one of the volunteer wardens, with plenty of time to admire the Loddon Lilies, which grow in the boggy areas close to the river, and to learn more about the hi
Post a Comment
Read more 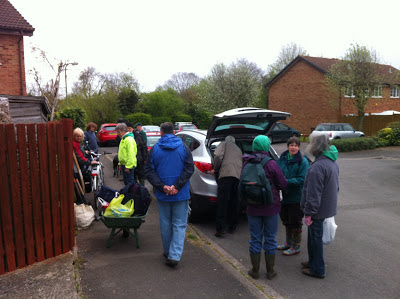 Saturday found us once again at the Abbey Fishponds nature reserve on the eastern side of Abingdon .  We assembled as usual at the far end of Hadland Road where we were met by site warden, Majorie White.  We unloaded the tools from session leader James's vehicle and proceeded down the track to set up our base on the mound and to be briefed on the morning's tasks by Majorie. Despite a few spots of rain as we set out, the clouds soon parted and the welcome sight of blue sky was soon upon us.  We split into a number of groups - the largest of which continued with the laying and maintenance of the woodchip path, another which tackled some overhanging brambles around the path margins and a third which was deployed on a litter pick. A number of wheelbarrows had been brought by various green gym members and the main objective with the path-laying was to re-distribute the large and troublesome pile of woodchip that had been deposited at the Radley Road end of the site.  Unfortunat
Post a Comment
Read more
More posts