The Green Gym were back at Boars Hill this Saturday, working with the Oxford Preservation Trust (OPT), again we split into sub-teams to carry out the work:

Old Berkeley Golf CourseOne of the teams on Saturday Oct 17th was assigned to work on the Old Golf Course. There were just five of us, the rest being at the Eiizabeth Daryrush Memorial Garden and the Jarn Heath. From the top of the old golf course it is possible to have a fine view of Oxford but our work was down in the lower part where a stream runs through the valley. Quite often, when the Green Gym visit a site, there are numerous tasks to be undertaken, but this time, there was just one, and it was something of a 'toughie’ . Both in the stream and on the banks either side, reeds have taken root and are in danger of stifling the growth of a very rare plant, the Ivy-Leafed Crowsfoot. It has very small leaves, shaped like ivy, hence the name, and it grows nowhere else in the county, so the importance attached to giving it space to grow and breathe here cannot be overstated.Our single task was simply to dig up as many of the reeds as we could and this meant digging out the roots, many of which were rather deeply embedded. We set to work with spades, forks and mattocks  and, although we were a small team, we managed to clear quite a lot. It was heavy work and the fact that we kept going and achieved so much amply demonstrated just how fit Green Gymmers are. Who needs Joe Wicks?

These fragmented sessions with the GG'ers divided up into Covid-19 manageable groups takes a bit of getting used to.

I know that there has been the regular amount of volunteers each week, but not as we know it - working on different sites at the same time! This is not one of the main principle of the Green Gym, which is all about getting together in a supportive social group for mental as well as physical health.

Even though our turnout was diminished due to Covid-19 there was a group of eleven divided into areas. Adrian, Graham and Mark headed down the bottom of the field to deal with a large bramble patch which had returned over the last couple of years since we last tackled it. Joan, Michele and Janet decided to work near the pond where there were bird feeders to clear encroaching invasive young samplings, nettles and other unwanted vegetation,  which were encouraging the wrong creatures. Meanwhile Lesley and Dieuwke went with Lindsay the resident OPT leader to clear back the build up of debris of leaves, soil and overgrowth along the OPT side of the lane.

The final volunteers were Sally - who had had the opportunity to do some scything and worked on more brambles near the pond, and Carolyn, who started to pull back overgrown nettles and brambles on the side of the path. I in my capacity as odd-job person taking photos, and helping where needed, dumped cut brambles in a drag bag to the edge of the Gardens under the tree line and ending up finishing off the clearing of the lane side edging.

Along with the photos of the enthusiastic efforts of everybody, the location of our base camp was under a chestnut tree next to the pond, which was yielding a good crop of nuts this year which some of us collected for roasting, leaving some for the wildlife,but by the look of the many empty husks they had already been at it. 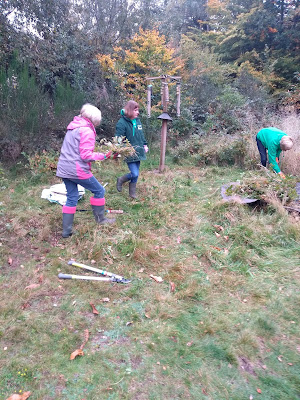 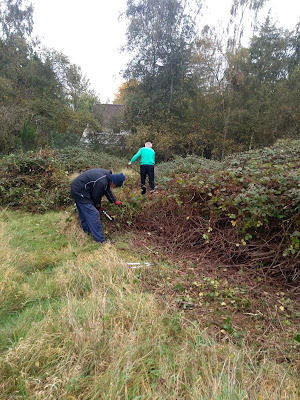 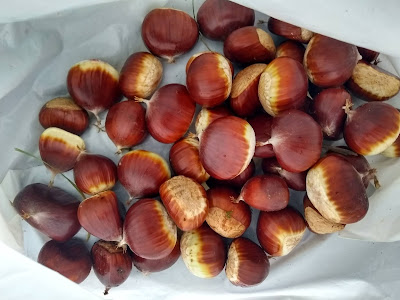 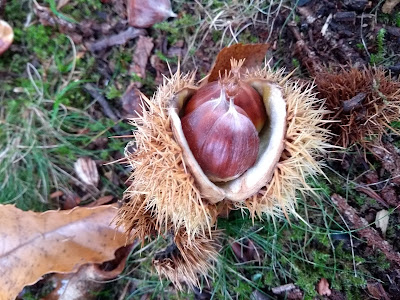 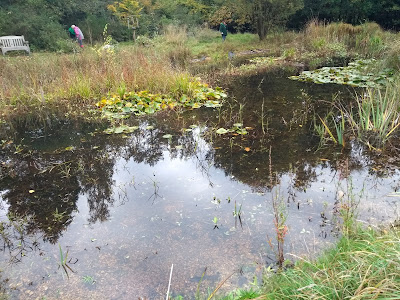 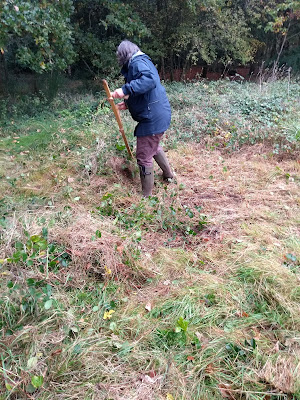 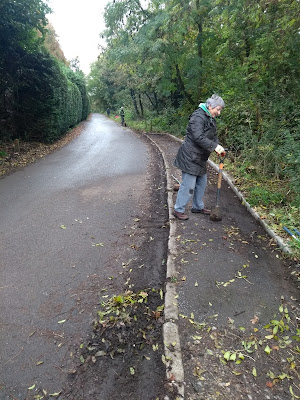 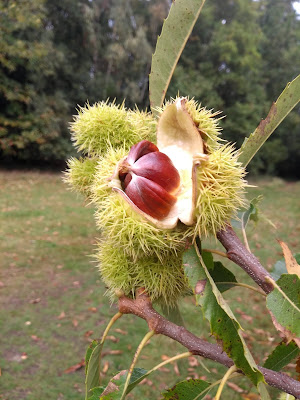 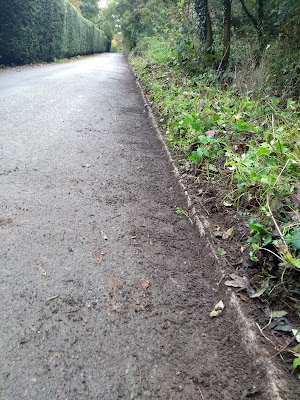