We joined site warden David Guyoncourt and his Abingdon Naturalist's Society Green Team volunteers for this week's session at Barton Fields.  It was the first time that we had been here since the end of the summer - back when we had been busy raking the recently-cut wildflower meadows.  The tasks on offer this time differed somewhat, but involved either raking-up vegetation that was being strimmed from the perimeter of the ponds, grubbing-up invasive snowberry plants close to the main path, or litter-picking.

We split into teams once we had transported our tools from the meeting point on Barton Lane, down to the main field and got stuck into our various assignments.  It was a lot milder than the previous week, and while not overly warm, proved to be a good temperature for working.

The pond-raking team had made impressive progress, being almost finished by the tea break, while the litter-pickers were nearing completion also.  Therefore the second half of the morning saw most of the group tackling the remainder of the snowberry, or moving along the track to cut back some of the bramble growth at the far end of the site.
-Andrew

Another session was held at Boundary House Fen, within Frilford Heath Golf Course on Saturday. It was our first trip here for a few months, and as usual, we gathered in the main club car park before driving the short distance along the road to the ground-staffs' premises to park and walk to the work site.  Or at least that was the plan - instead, our convoy arrived at the turn-off to be greeted with a locked gate, and we had no option but to park on the grass verge beside the main road and carry our tools a longer distance to the fen than usual.  On the way we passed by Two Pine Fen, where we have held a couple of weekday sessions, this year and last.  Unfortunately, the reeds had not been cut as had been hoped, and the area looked rather overgrown and neglected.

The longer walk meant that we didn't arrive at the Boundary House site until 10am.  It was still rather cold and frosty at this time and some warm-up exercises were performed to get us going.  While the session was led by Kevin this week, as usual at this location Judy Webb (representing Natural England) was present to oversee our operations.  Raking the cut reeds was the main task, with the removal of some small trees and log debris also on the agenda.

The raking was intially quite tricky since the ground was frozen, but soon after we started, it thawed quickly and we raked the reeds into piles and then either pitch-forked them to piles at the top of the site, or filled a builders' drag bag with them and hauled them across.

James began to remove some tree growth around the perimeter as the rest of us were occupied with the raking, and was later joined by Carolyn and Lesley.

The rakers worked from one side of the site to another throughout the morning and made impressive headway, but were unable to complete the task in the time available.  We will be back in the new year to continue though, and during the past few years working here, it is clear that we have made considerable progress in restoring this locally rare habitat.
-Andrew

Posted by Andrew at 5:51 PM No comments:

Four weeks after our last session with the Oxford Preservation Trust at Boars Hill, we returned, albeit at Jarn Mound this time rather than the Elizabeth Daryush Garden; which had been our venue in October.

We again met with Rachel Sanderson of the trust, who along with our leader of the day, James, outlined the tasks for the morning.  Primarily, we were to clear the mound itself of scrub and tree saplings that had taken root there, with the intention of restoring it to its original state.  There were also some flatter areas of the garden that required clearing, for the less intrepid among us.

Unfortunately, the day had begun a little on the inclement side.  Indeed as we arrived, the rain fell persisently, making many of us wonder if the session would go ahead at all!  But of course, the Green Gymmers are renowned for working whatever the weather, and the damp conditions did not deter us.

A couple of problems were immediately evident due to the rain;  firstly, the steep sides of the mound were somewhat slippery in places, but perhaps more crucially, the intention was of constructing a bonfire to burn the vegetation that was to be removed was in jeopardy. Rachel attempted to get a fire going early-on, but this proved tricky as the material was rather soggy.  Fortunately she was able to retrieve some fire-lighters to get things underway, and we were off!

Another group of trust volunteers had recently been along to begin the task of clearing the slopes of the mound and we continued where they had left off, with the intention of removing any growth from the patch where they had been working, along to the steps to the top of the landmark.  This seemed rather a daunting prospect at first, but with a good number of us present, and joined by a hard-working local volunteer, we soon began to make significant headway.

By break-time, the precipitation had largely ceased and reviewing our progress, we were encouraged by our efforts and confident that with a final push, we could achieved our morning's objectives.  Indeed, this we did, although, since the bonfire was hardly roaring, a lot of the cuttings remained - to be dealt with on a later occasion.

Meanwhile, the group working on the flatter areas of the garden had also done themselves proud by opening up some spaces amongst the trees, to provide much-needed light in areas that had previously become overgrown.  A fine effort all-round!

All-in-all, about a third of the sides of the mound have now been cleared, with much work thus remaining.  We plan to return in January though, when we shall continue with this task.  Watch this space!
-Andrew

Winter has come quickly. Green Gym is working at the town end of the Ock Valley Walk in Abingdon this morning. Eleanor is leading and sets out our plans which include clearing brambles, nettles, and rank growth from an area where we have previously planted bare-root saplings. Today we want to plant some native wildflowers within the cleared parts. And of course we will be picking litter. 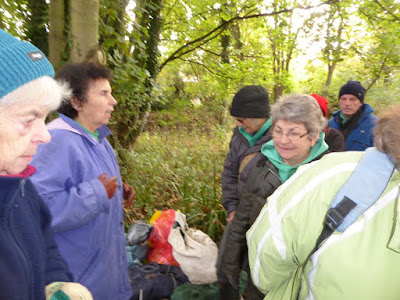 Where to start? Ursula sets a good example with a slasher. Some of our sapling plantings can be seen in the background. 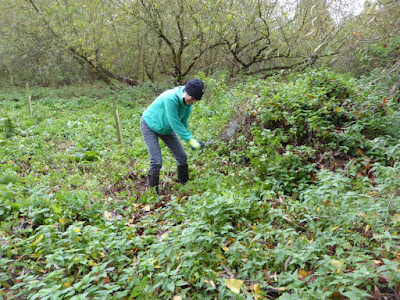 Margaret and Kate have found a good place. The saplings in this area have done very well indeed and are beginning to look quite vigorous – a tribute to earlier efforts to give them a bit of breathing space by putting down plastic sheets to suppress competing weeds. 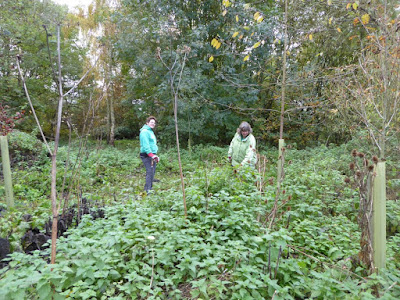 As the morning goes on coats come off – this looks like Margaret’s. 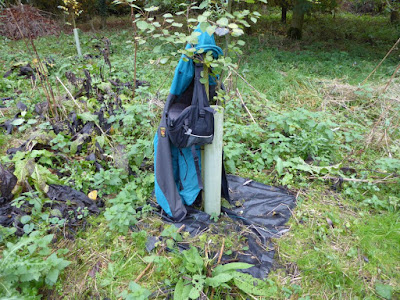 Wildflowers adjusting to the winter! 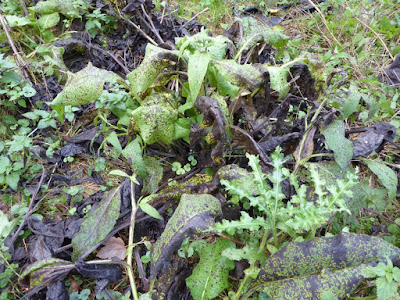 Coffee at last! Essential for keeping warm. Margaret has put her coat back on. 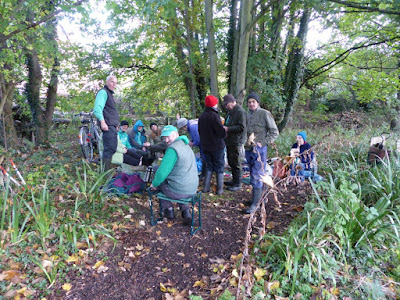 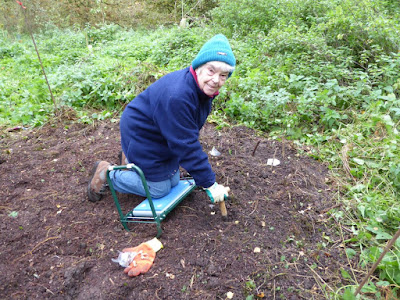 Behind you Carolyn! Lesley moves in to help with lopping. By the time we finished and left for home, the sun was shining and it looked like being a really nice day, although still cold. Plenty left for another day! 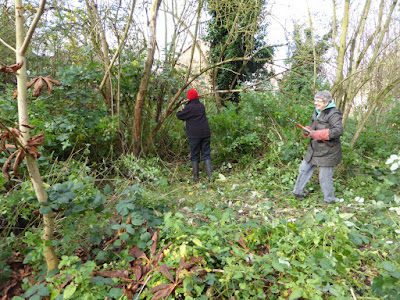 We have been working at Kennington Memorial Field for a number of years now, clearing scrub from the slopes so that the valley remains an area of grassland and wild flowers. This time Rachel from Oxford Preservation Trust was in charge and led us down to the lower end of the field, where we were to cut back the trees and bushes by several metres and burn the scrub on a bonfire.

We were joined by some families with children of varying ages, the youngest only three, who had answered a local appeal for volunteers. We set to work and soon we had a bonfire going. Even the children who were too young to use loppers and saws joined in, carrying branches to the bonfire pile. Despite the drizzly weather they all worked cheerfully.

At tea break time we enjoyed some delicious snacks that Rachel had brought and a tin of chocolates supplied by Michele.

We found two old birds' nests in the course of the morning and cutting back the scrub revealed a log pile with a rabbit hole underneath and we spotted a frog and a mouse, also quite a few spiders and other creepy crawlies.

By the end of the session we were agreeably surprised  to see how much we had cut back.
We will be back at the end of February to work on a different area.
-Eleanor

photos to follow...
Posted by Andrew at 4:02 PM No comments: