Spring has sprung, and we were out in force to finish tidying the Arthur Evans Garden at the foot of Jarn Mound. This was the damage caused by the heavy snowfall at Christmas. Chainsaws had earlier in the week cut down any dangerous trees and broken branches and we dragged all this to the bonfire site. We rescued some of the flowering twigs to take home, as it seemed a shame to throw them onto the fire. There is still more to do, but we look forward to helping Oxford Preservation Trust another day.

In the meantime, walking through the woodland with our loads it was a pleasure to notice the many wild flowers now in bloom.  The ground is sprinkled with the star like flowers of the Vinca in blue, white and purple. There was even a clump of stunning dark mauve hellebores and one of snakeshead fritillaries. The banks are covered in primulas and in the sunnier patches cowslips and forget-me-not.

In the boggy area near the bonfire site the lodden lilies are in flower, and are likely spread further. We can also look forward to seeing flag irises pushing through in the ponds later. The bluebells are also just beginning to flower and will be a carpet of blue, here and on other sites on Boars Hill in a week or two.

As an addition to our work on the wild flower patch on Easter Saturday, James and I put the sign up today to mark the site.  The area is still clear of nettles, but around the tree where we fixed the sign, the nettles are growing apace. While this could be a good thing, my ankles are truly stung.
-Ursula 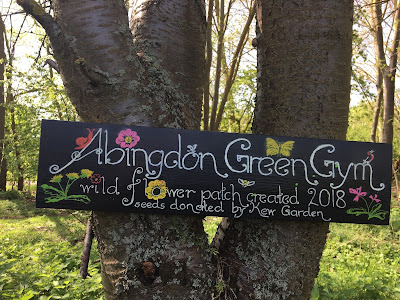 Posted by Andrew at 9:21 PM No comments:

The weather was better than it had been for a long time when nine of us assembled to work on Cothill Fen under the direction of Judy Webb from Natural England.

The first task was to transport logs from the piles around the fen to build a short path leading into the wet woodland so Judy could access that area with less risk of falling in!

The main task after that was to fill the wet areas of the fen with cut reeds. There was also some work to be done on cutting shoots off the alder stumps on the fen. The reason for filling the wet areas was because the fen is too high in nitrates, which drain off the neighbouring agricultural land. The reeds will rot down and purify the water, making it more suitable for calcareous fen plants.

Transporting the reeds from the piles around the fen to the areas where they were needed was hard work and we were glad of a tea break. Then we continued with the task. An enjoyable task for some people was jumping on the reeds to compress them, then adding more until they could be walked on without getting wet feet.

By the end of the session we had made pretty good progress. There was more to be done, but the task will be continued by the Friday Cothill group, and we will be back again in four weeks’ time.
-Eleanor

Posted by Andrew at 3:49 PM No comments:

Apart from a few spots of rain early on, the weather stayed dry. There were several tasks. One was to dig out the boggy areas on the path through the middle of the reserve and fill them with the rubble (from the demolished house at Thrupp Lake), then cover them with soil again. This would help with drainage.

There was also cut grass from the Radley Road end of the site to be raked and piled up, litter to be picked up and some brambles to be cut back. We set to work on our chosen tasks.

There was far more litter than expected at the Radley Road end. We think someone may have been camping out there at some point and certainly whole bags of rubbish had been dumped, We even found a T.V. aerial.

Digging out and filling the wet areas was hard work, but the task was completed by tea break time and by the end of the session, all the cut grass had been raked up. It was good to see a few butterflies, including a brimstone, and several bumble bees, so maybe Spring is here at last.
-Eleanor

Posted by Andrew at 5:02 PM No comments:

This was an extra session, not on the programme as we don’t usually meet on Easter Saturday, but there was still work to do on the wild flower patch, which we hadn’t managed to finish the previous week. In the end ten of us turned up including new recruits, father and son Nick and Oscar, as Oscar is doing his Duke of Edinburgh award. We had decided to work from 10-12 with no tea break and then head off for a pub lunch.

Most Green Gymmers went to work on the wild flower patch, digging it over and extending it and pulling up nettles and goose grass. There was also work to be done sawing and tidying up fallen branches and James volunteered to do this. There was still quite a lot of litter so I went litter picking. It was encouraging to meet some members of the Youth Football Club litter picking around the pitches (female members, of course!).

By midday the wild flower seeds had been sown and marked out with stakes and labels, with the woodland ones nearer the trees and the meadow ones in the less shady area. Fortunately the rain held off until we had almost finished and we headed off to the White Horse for lunch. I was unwittingly accompanied by a small snail, which had crawled up my fleece during lunch and wasn’t discovered until we were leaving. I hope it likes its new home in the pub flower beds.
-Eleanor 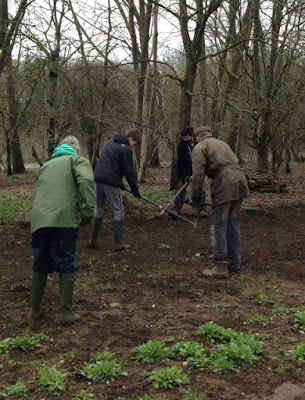 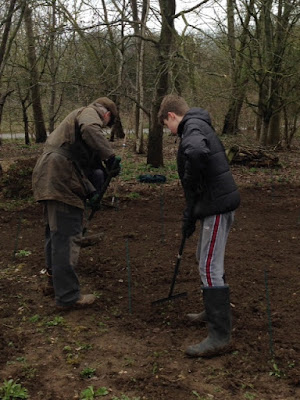 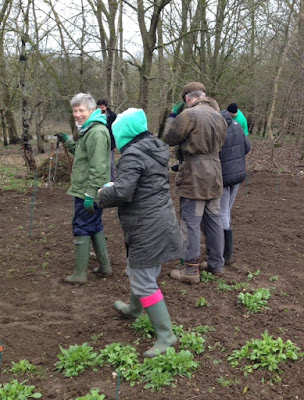 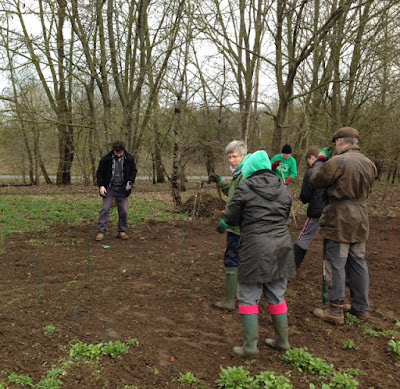 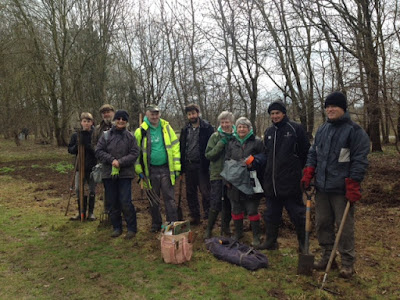 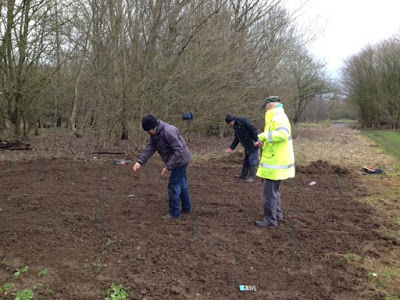 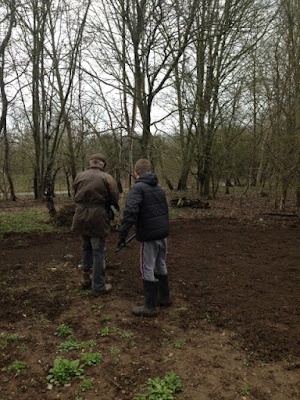 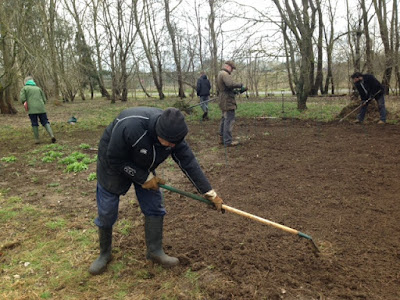 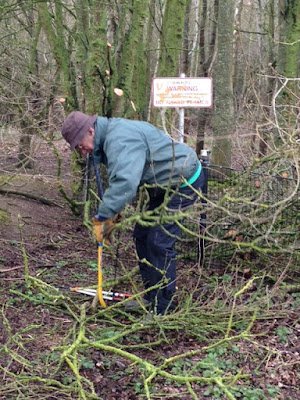 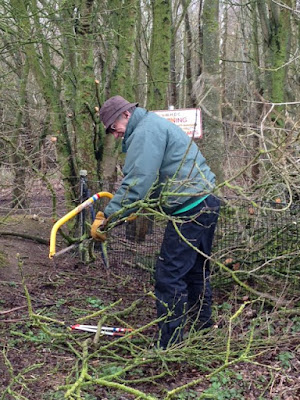 Posted by Andrew at 6:49 PM No comments: