Our new programme for the remainder of 2017 has been published.  See below, or visit the programme page on our website for a PDF file version. 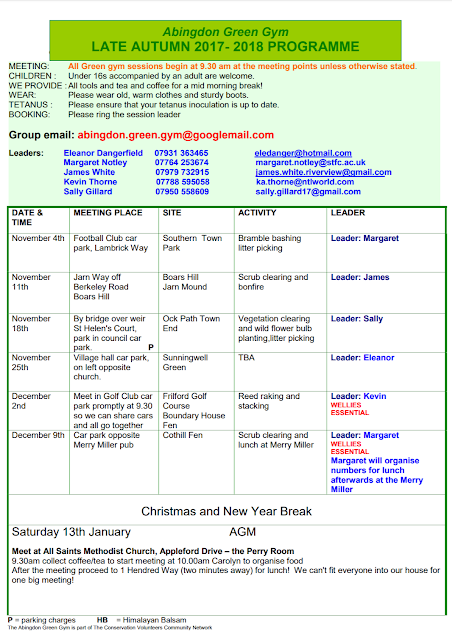 Posted by Andrew at 9:24 PM No comments:

This Saturday we were back at Kennington Memorial Field for our bi-annual scrub-bash and bonfire.  The site falls under the jurisdiction of the Oxford Preservation Trust, and we met again with Rachel Sanderson from said organisation who outlined our itinerary.

As well as a respectable Green Gym contingent, we were joined by a number of local volunteers who significantly boosted our numbers to over twenty.

With a chilly start, we were keen to get underway - to continue cutting back scrub (mainly hawthorn, blackthorn and brambles, which quickly encroach upon the area if left unmanaged) and to get the bonfire lit!

No sooner had we started, then we were infiltrated by a herd of inquisitive cows that graze the field!  It soon became apparent that they were keen to feed upon the leaves of the shrubs that we had felled, therefore we had to become efficient at removing the cuttings to the bonfire before they tucked-in.  Not that the heat of the bonfire appeared to dim their appetite, and we remained surrounded by our bovine buddies throughout the morning.

After the break, we were instructed by Rachel to stop cutting and to concentrate on burning, at which point the fire was enlarged, with a second area of trimmings being lit.  While initially being slow to get going due to all the green wood and general dampness, following a little coaxing, it roared into life.  This ensured that we were left with nothing but ashes to show for our efforts come the end of the session.
-Andrew

We met in the car park at Frilford Golf Club and then headed off to park by the green keepers buildings from where we made our way, looking out for flying golf balls, to Boundary House Fen. Here, our task was to rake up cut reeds from the fen under the direction of pond and freshwater habitats expert, Rod d’Ayala.

This is an alkaline fen, home to a number of rare species of flora and fauna and it is important to cut and rake the reeds every year. Rod had spent some time damming a ditch that runs through the middle of the fen. This will help to prevent the fen from drying out.

We set to work raking the reeds and Rod told us that, as well as transporting the reeds to designated places on the very edge of the fen, we could rake them into the ditch. We enjoyed doing this as it was easier than carrying heavy loads of wet reeds to heaps on the edge and some of us were brave enough to step on top of the reeds and see how far up our wellies the water came and whether more needed to be piled into the ditch.

After a break for tea and coffee, when we used Rod’s wheelbarrow to hold the mugs in the absence of a table, we carried on with our work. The weather stayed fine, though it did cloud over briefly. We will be back again in early December to rake the other half of the fen.
-Eleanor

Photos by Eleanor unless otherwise stated:

This weekend, we rendezvoused with Rachel Sanderson from the Oxford Preservation Trust, back at the Elizabeth Dayrush Garden, Boars Hill.

We decamped in a pleasant spot by the pond, where there is a seat and a view of the gardens.  Some of the team became distracted by the falling sweet chestnuts, which they began to collect, to possibly make a Swiss culinary recipe suggested by Ursula!

To the job in hand; Rachel wanted us to work on the north side widening the path through the wood which had become overgrown.  Also to clear bracken areas so that wild flowers could come through in the spring. We decided that it was best to separate and have a team starting at each end of the path, and work towards each other, with a couple of teams clearing the bracken.

The path was patchy so we made quick work of it. The bracken and brambles kept us going for the rest of the morning. One side was completed, but there is plenty more to be sorted later. We are booked with Rachel to return in the new year for some more sessions which should keep it under control.
-Kevin

It was back to Abbey Fishponds this Saturday for a session with the Earth Trust, who manage the site.  We met with warden Lucy who instructed the group on the morning's tasks before we unloaded our tools and set up our encampment on the central mound within the area.

The main job on this occasion was to rake up the reeds from the wetland area, most of which had been cut earlier in the week.  Adrian continued the scything operations throughout the morning however. Due to the good turnout, a sizeable area was raked.

Elsewhere, a willow was trimmed back with the branches that were removed, then used to fill a gap in a hedge.  Brambles were trimmed along path margins and nettles were pulled where they had become a nuisance.  A litter-pick was also conducted.

The site is fairly vast with many interesting features and it was, once again fun to work here alongside the Earth Trust who hold regular work parties both on weekends and during the week, in order to successfully manage the reserve.
-Andrew