Our new programme for Winter 2019/2020 has been published and starts after the session this coming weekend. It will be uploaded to our website soon! 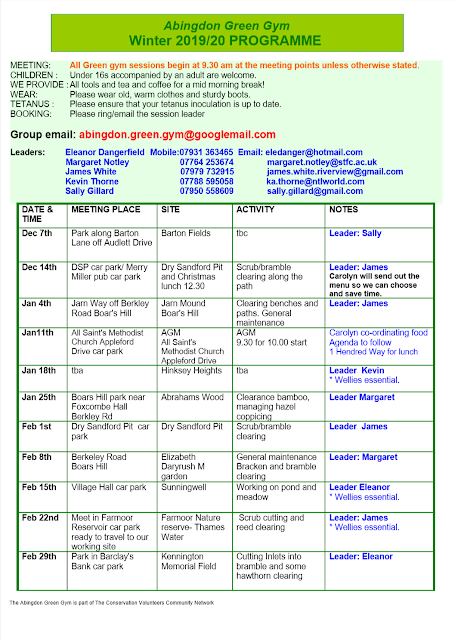 A crowd of 22 green gymmers turned up for today’s session at Jarn Heath on Boars Hill, plus two local residents who decided to join the group. It was a mild, muggy morning. We were led by Margaret, with Lindsay Priddle from OPT and Rod D’Ayala giving instructions.

We mainly split into two work parties. The first party were set to laying the hedge along the lane, under the expert guidance of Rod. And the rest of us headed off into the woodland to plant foxgloves, red campion and wood sorrel, which local resident, Camilla, had potted up from her vegetable garden. As the secondary woodland on the heath means it’s quite poor at ground level, these were to be planted ready to give variety and colour when they flower next spring.

Otherwise there was also a lot of clearing of dogwood from the woodland floor, as well as clearing up where contractors had been to cut back trees. We set to work and by tea break all the plants had been planted and the hedge was coming along brilliantly.

We had our tea and biscuits on the lane, admiring the handiwork of the hedge-layers. A horse came through – very interested in the coffee and walnut cake provided by Eleanor!

After the break, we continued with our tasks. Camilla showed us the stone benches (which we’ve scrubbed in the past) in memory of Sir Arthur Evans and how originally the yew trees around them were meant as windbreaks but over the years have been allowed to grow wild. Perhaps we’ll try chopping them back one day.

It was a good session and in particular, many of our members welcomed the opportunity to learn the art of hedge-laying!
-Joanna

Posted by Andrew at 9:47 PM No comments:

We were at Boundary House Fen at Frilford for this morning’s session, led by Sally under the aegis of Rod D’Ayala, who has been managing the site, and Judy Webb of Natural England. Seventeen of us turned up, during a lucky break from the previous days’ rain, including newcomer Phineas, who came with his father and will be joining us for sessions for his Duke of Edinburgh Gold Award.

We gathered initially in the Golf Club car park then consolidated into fewer cars and drove round to the site. We took up our tools – mostly rakes - and made our way across the golf course which was pretty busy.

Rod was already hard at work on site, and he gave us our task for the morning which comprised one thing: raking! Rod pointed out where the cut reeds lay strewn about the ground, and where we needed to rake them to, placing them in the centre of the stream running through the site, or in the hedges at the edge of the fen, or in large habitat piles to rot down. Particularly towards the bottom of the fen, there was a pool which needed filling, and also Rod had set up markers between which we were to make a ridge of reeds. Following our instruction, it was time to get started.

At break time, just as we were enjoying our tea and biscuits, we had an unexpected incident. A golfer’s ball had strayed into the rough at the edge of the fen. In trying to hit it back onto the course, it hit a tree and bounced back right into the middle of our group – fortunately not hitting anyone – so the golfer had quite an audience trying to hit it back out again, which he succeeded in doing to a round of applause.

After the break, it was back to more raking. We’d worked hard and made real progress and there wasn’t a huge amount left to do. Meanwhile, Judy scattered some marsh louse wort, a parasitic plant that should keep down the sedge and reeds. She’d also collected a basketful of fungi – quite a variety to be found on the fen. Before we knew it, the session was at an end, and we were making our way dodging golfers back across the course.
-Joanna

Posted by Andrew at 6:32 PM No comments:

We were back at Abraham Wood for our session this Saturday. Fifteen of us turned out on a freezing morning, which started brightly enough although rain threatened as the morning wore on. The session was led by James, with Lindsey from OPT giving us our tasks.

At the top of the site, the battle with the bamboo continues. It’s been cut back substantially, but there was still more work to be done here. A few of us took to it with mattocks.

The other jobs were to re-edge the paths through the site, and to spread out various piles of wood chip which have been left by the contractors who have been thinning the trees. We also took to cutting back any new laurel shoots that have grown from previously chopped down bushes. As the laurel contains cyanide and can’t be burnt we put these cuttings on the top of wood piles where they’ll hopefully rot down over the coming months.

Eleanor provided a delicious ginger cake at tea break. With temperatures only just above zero, it was agreed we could all have done with an extra pair of socks or boot linings.

We set back to work and at midday on the dot the rain came. So we spent the final half hour of the session getting soaked, but went home happy with our progress.
-Joanna 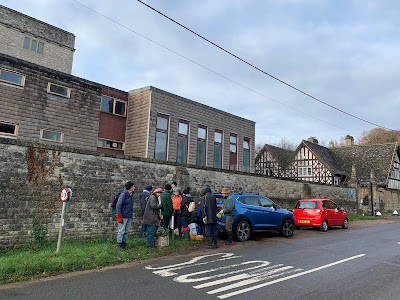 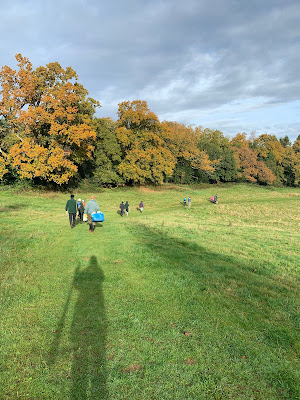 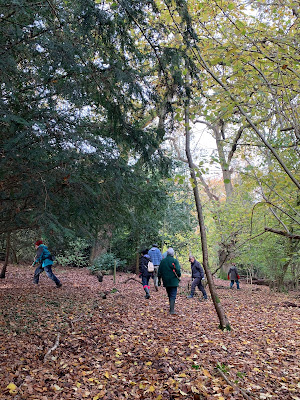 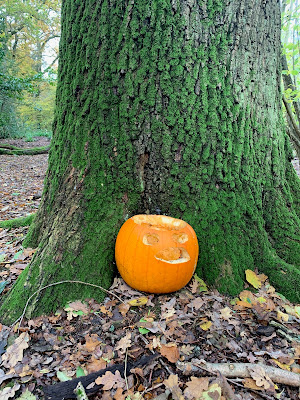 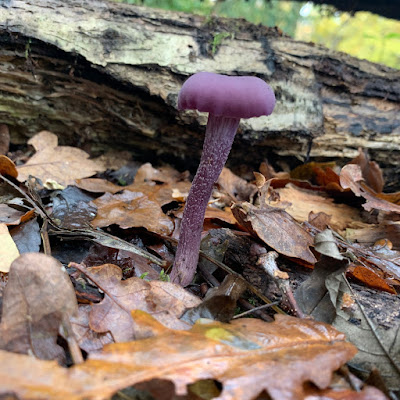 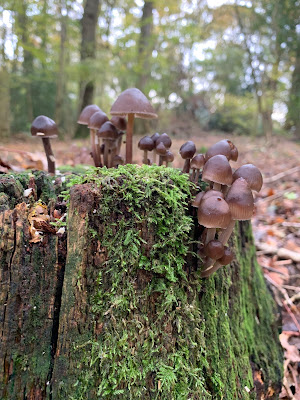 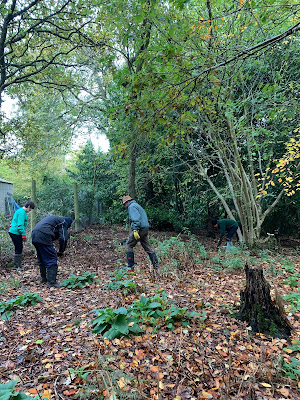 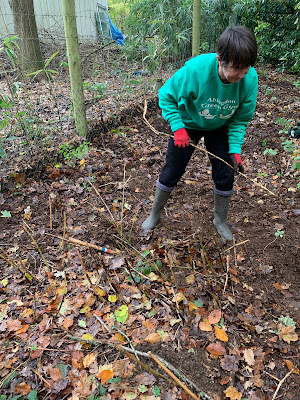 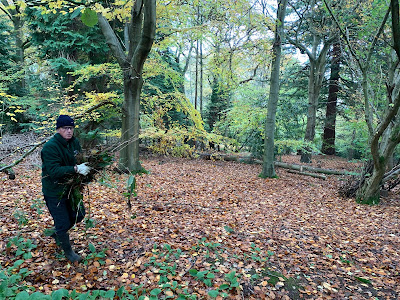 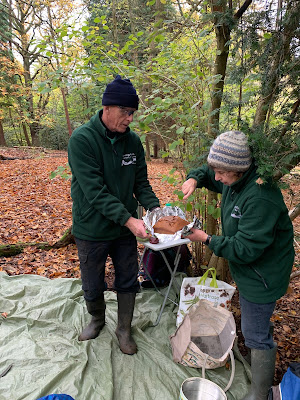 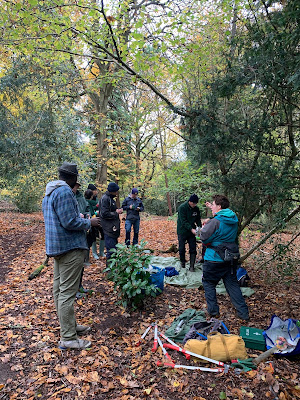 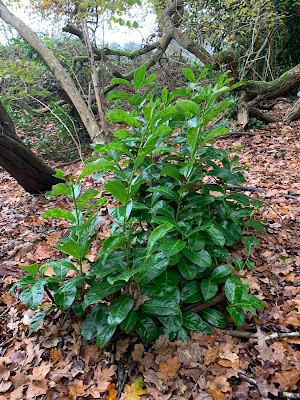 Several green gymmers gathered at Cothill on Saturday morning, ready for our scheduled session at the fen. However, upon arrival we discovered that both Judy and Steph from Natural England had safety concerns due to high winds and rain that had been battering the site overnight and into the morning. There was a risk of trees coming down, particularly diseased ash, and therefore the decision was made to cancel.

While obviously disappointed, we prepared to head back home and begun to let our members know - including those that were still en route. The weather did look like it was set to improve though, and just before we retreated, leader Eleanor suggested that we might instead head to Southern Town Park to tend to our wildflower patch. There might be enough work to keep a smaller group busy for a while.

Five hardy souls thus reconvened at the Lambrick Way car park back in Abingdon to ensure that the morning was not a total write-off. Additional tools had to be fetched on the way and the tea kit had to be collected from elsewhere, but shortly after 10am we were on site and ready to go.

A couple of years ago we created and continue to tend a wildflower patch in Southern Town Park, down beyond the sports pitches. It has proved to be a big success with a spectacular display again this summer. We haven't had a session here since July though, so the vegetation was in need of cutting back and raking. Armed with slashers and rakes, we got this done fairly quickly despite our limited numbers and took great care not to disturb the local wildlife as the raked the cuttings into habitat piles around the edge.

The tea break was then enjoyed, before sowing some more seeds for next year and then moving across to the wooded area of the park to focus on some jobs there.

We split into two tiny groups, with myself, Sally and Graham cutting back brambles around the edges of the paths and while Eleanor and Margaret went off litter picking. In the space of about an hour, we succeeded in tidying up the area with brambles lopped and a worryingly large amount of litter collected and bagged up!

Hopefully the weather will be kinder next week and we can enjoy a return to our advertised autumn schedule!
-Andrew

Posted by Andrew at 4:56 PM No comments: