Sixteen Green Gymmers turned out on what proved to be a beautiful sunny day to pull up yet more Himalayan Balsam.

We parked as usual at Woodhaven and made our way past the meadow and across the bridge to the SSSI land. However, this time we were concentrating our efforts on land belonging to the neighbouring property. There was an open meadow with very dense patches of small plants.

Pulling these up required a great deal of bending and patience. Alison from Natural England had also mentioned another patch on the edge of the woodland which was growing on chippings from felled willow trees. By contrast, these plants proved to be gigantic and some were already in flower. We had soon made some very satisfactory heaps.

Our tea break was enhanced by some delicious Spanish apple tarts, which Victor had made to celebrate his birthday. Some of us varied the work after the break by pulling up plants on the edge of the large, murky pond, though nobody indulged in any wild swimming, either deliberately or accidentally.

I'm sure that in a few weeks' time the tiny plants will have shot up and another attack will be needed.
-Eleanor

On 20th June, a couple of days  after the 200-year anniversary of the Battle of Waterloo, a unit of Green Gym volunteers entered the field at Manor Farm, Marcham in response to a report of massed ranks of Himalayan Balsam deployed in the area and posing a severe threat to the native wildlife. After an initial assessment by the unit leader, Kevin, the unit advanced into the field.

It was a morning of steady rain when eleven of us assembled at Woodhaven to tackle the Himalayan Balsam. We tramped past the meadow and over the bridge to the Natural England site and set up our base at the usual place under the trees. We were pleased to see that the central part of the wood, which we had worked on for the past few years seemed largely clear of Himalayan Balsam and there were a variety of flowers returning including a number of yellow irises, ragged robin and cranesbill. There were some overhanging branches and a tree which seemed to have split down the middle so a some of us set to work to deal with those while the rest of us started on the Himalayan Balsam at the edge of the wood. Of course, it was not yet in flower but some plants were already quite tall and there were numerous small ones waiting to shoot up.

We were glad to stop for our break and enjoy a cup of tea or coffee and cake. The weather had not really improved but we pressed on with our task until 12.30, by which time the rain had more or less stopped. There will be plenty to do on our remaining sessions here and we hope for better weather next time.
-Eleanor 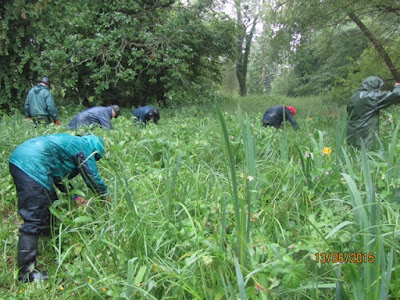 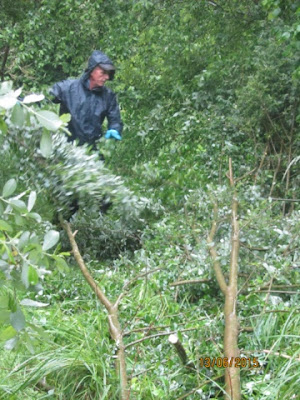 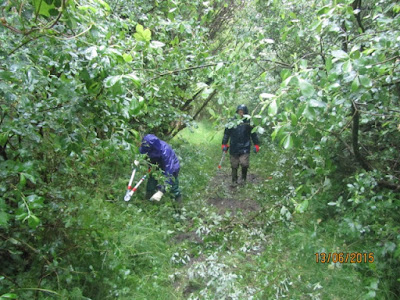 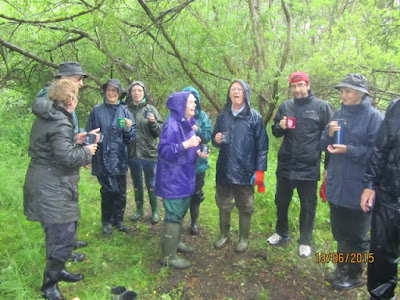 The annual Fun in the Park community event once again took place in the Abbey Fields, close to the town centre.  A good opportunity for us to engage with the local people and perhaps attract new members.

However, upon arrival, a certain amount of dissatisfaction was met with the realisation that the Green Gym pitch, along with those of the majority of Abingdon's community groups, was not (as in previous years) actually to be in the park itself.  Instead it had been relegated to the adjacent car park! Fun in the Car Park?!  The main arena was instead populated mostly with commercial operators this year.

Despite the enforced shift to the margins, a gazebo had been provided by the Abingdon Chamber of Commerce and was duly erected. The Green Gym signage was then put in place and portable tables raised.  Upon the tables were placed the usual display boards showing photos of our activities along with leaflets and the new summer programme. Spots were also reserved for our perennial treasure hunt game and for marmalade and lemon curd - made by Green Gym members and sold to raise group funds.

A steady stream of people visited the stall, with many of our regular members helping out in shifts throughout the day. In addition to the general public, Abingdon's new mayor, Helen Pighills, dropped by, as did our recently re-elected MP, Nicola Blackwood.

The event concluded at 3pm and it was time to pack up and get going, ready to clear the area for the follow-on event, Music in the Park.  The gazebo was dismantled ready for collection and other paraphernalia was carted off to the nearby Cattle Market car park, where Eleanor's husband, Arthur had been able to stop with his vehicle.

Another successful event, but let us hope that next year we might be permitted to return to the park itself, where we are likely to be more visible to the public!
-Andrew

Green Gym at Abbey Meadows on the Abingdon Blog

The popular Abingdon Blog site has documented our session at Abbey Meadows last weekend.  Click HERE to view the entry!
Posted by Andrew at 10:51 PM No comments:

The Abingdon Green Gym programme for Summer 2015 has just been published.  Please see below for details or click HERE for a larger-print pdf file version. 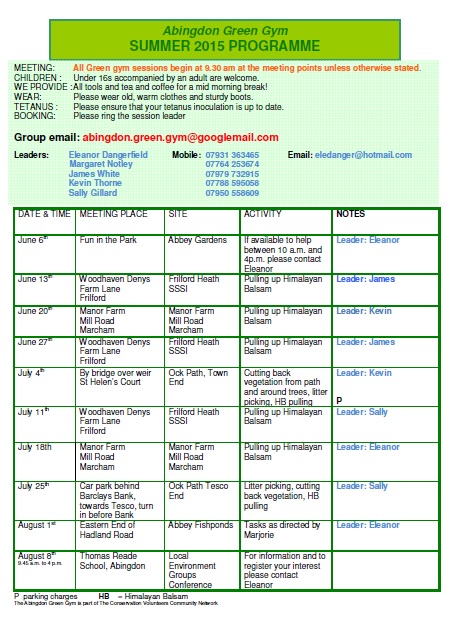