Our latest programme for late autumn 2018/2019 has now been published.  See below or click HERE for a larger text PDF version. 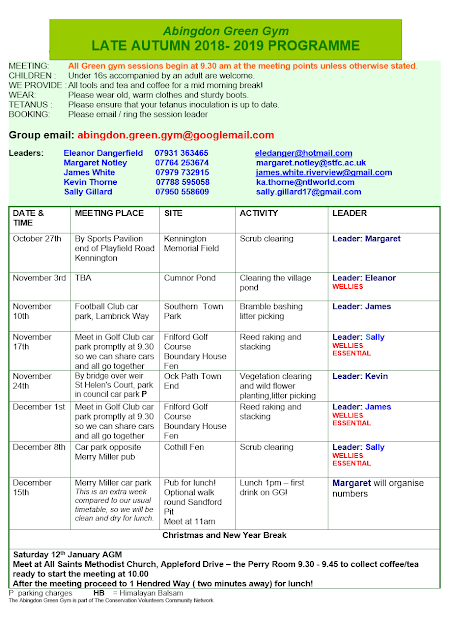 We had received a comprehensive email from site supervisor, Rod D'Ayala (from the Freshwater Habitats Trust) in advance on what was to be done during this session at Boundary House Fen, situated within Frilford Heath Golf Club.

The principal task was to rake the cut reeds and fill the main drainage ditch in order for the water to flood the adjacent area and continue restoring this locally rare wetland habitat.

Since it was a misty start with low visibility, I thought it best to take the track down to the fen rather than chance the short cut across the course.  We couldn't afford to lose any of our small team of dedicated Green Gymmers before we even started.  If we had run the gauntlet of the fairway with its many hurtling golf balls, we risked both injury and spoiling the golfers' rounds!

Once at the fen Rod was already there along with our ecologist-in-residence Judy Webb. Rod was busy with the brush cutter on the reeds. We commenced our operations with the familiar routine of raking, drag bagging and pitch forking the reeds to the ditch.

We were pleased to see that the blocking of the ditch - a continuation of the work from our previous sessions here, is having the intended effect.  The water is being pushed out onto the wider fen area.  Today was therefore a continuation of piling the new reeds on top of the older reed layers and standing on them making them sink, being careful no one got a boot full of muddy water or worse! This has happened in the past to a few unfortunate folk amongst us, sinking thigh-deep.

Judy was here to see how the flora was coming along but had to rush off to supervise other work parties on nearby sites. It is a busy time of year for conservation work, clearing the summer's growth to encourage the right plants to come through next year.

To that effect, Rod and Judy had brought a drag bag full of marsh lousewort plants. The seeds of the plants when spread across the fen will restrict reed growth next year. Apparently in the old days, people would stuff it down their shirts to try and kill off body louse.

So with the marsh lousewort duly spread and trampled in, we completed the morning's efforts. We'll be back here in a month's time to continue our work and see how the transformation is coming along.
-Kevin 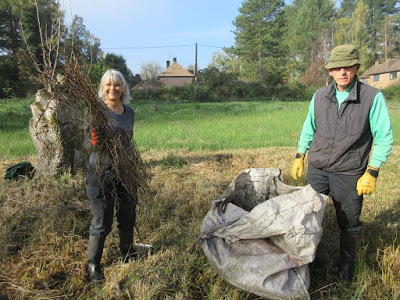 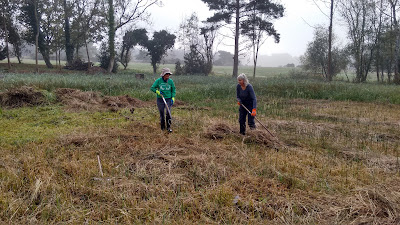 Fifteen green gymmers turned up for today’s session at Jarn Mound, led by James under the direction of Rachel Sanderson of the Oxford Preservation Trust.

On entering the site we were confronted by a huge fallen branch from one of the liquidambar trees originally planted by Sir Arthur Evans, probably in 1932. It had fallen right across the footpath and was a sad, if beautiful, sight to see.

In the wind and rain, we gathered at our meeting point, a shelter built amongst the trees, and Rachel’s first job was to ring the local fire brigade to let them know that we were having a bonfire. When one of the latecomers asked what the phone call was about Rachel explained we needed to let them know… because of course we couldn’t have hunky men in firemen’s uniforms turning up, she said with a knowing smile and shrug of her shoulders!

With Jarn Mound itself already cleared of its overgrown vegetation – a job which had been earmarked for us – by another eager volunteer group the previous week, our tasks for the day turned out to be fourfold: to drag the branches which had fallen in the winter snow from the other end of the site to the bonfire – continuing the work from last April; to cut down saplings which had sprung up around the pond area; to cut back some shrubbery and to clear some steps down from the footpath. Graham was put in charge of the fire and we set off to carry out the various jobs.

Within half an hour of starting work, the skies cleared and we were blessed with mellow autumn sunshine for the rest of the session.

By tea break we had made good progress in all areas. The bonfire was blazing and the mood upbeat. Then the draggers carried on dragging, the cutters carried on cutting and three of us went to deal with a shrub that needed clearing. For those step counters amongst us, it was a good 300 steps between the end of the site where the snow-damaged branches lay and where the bonfire was lit, so depending on how many journeys you made, you built up quite a count (the bloggers achieved 13,000 steps between them!).

At the end of the morning the bonfire was still roaring! However, the last few loads of tree debris were already well alight and so Rachel and Mark stayed on a little longer to ensure that the flames died down as expected.  The remainder of the group gathered together the tools and other paraphernalia and headed homewards.  The conclusion of another successful session.
-Joanna and Andrew

Unfortunately the day was cold and drizzly, but Green Gymmers carry on regardless!

The Earth Trust Thursday group had already cut large areas of reeds, so there was a lot of raking and stacking to do. There was a willow tree to be pruned and vegetation to be cut back from the public footpath along the edge of the reserve. Adrian was zooming along here with a hedge trimmer, so it was hard to keep up with him when clearing the heaps.

We were glad to have our tea break, and despite the rain getting heavier, most of us managed to work until the end of the session and we were pleased with how much work we had done.
-Eleanor

The bright blue autumnal skies couldn’t have been more of a contrast to last week’s rain as 15 green gymmers plus a couple of local volunteers met for today’s session at the Elizabeth Daryush Memorial Garden up at Boars Hill. On arrival, we discovered a couple of large branches had come down from the sweet chestnut tree where we gathered, and vandalism was briefly considered before being dismissed.

The warden, Rachel Sanderson of Oxford Preservation Trust, wasn’t able to make the session, but had given us a map showing us what needed doing and where: mainly cutting back the nettles, bracken and brambles to stop them from encroaching onto the grassland of the garden, and to make way for where the daffodils come up in spring.

We spread out in all directions, taking on the various tasks, slashing, lopping, raking and piling up the debris to rot down. Graham and Ursula dragged larger branches through the undergrowth to add to the ‘dead hedge’ along the roadside which creates a habitat for wildlife. Elsewhere, Janet and Joan bashed brambles, Kate attacked the bracken and frenetic activities of various kinds could be observed right across the garden.

We had our tea-break in dappled sunlight, with Carolyn and Janet retreating to a bench by the pond. The rest of us took our tea and coffee beneath the trees, while gobbling up a few biscuits.

Back to work, with more lopping and slashing – a great way to release any tension and get the heart rate up! The sun continued to provide some lovely warmth all the way to the session's conclusion. More of the same next week, please!
-Joanna and Andrew

Photos by Joanna and Andrew: