It was another big turn out from Green Gym members for our session at Abraham Wood on Boars Hill this morning. As usual for our work here, we all had to sign an attendance sheet as the work in the woods is funded by Network Rail and volunteer numbers need to be known. There were 23 of us, led by Margaret and there was lots of work for us to do.

Lindsay of OPT gave us our tasks for the day, the main one being hazel coppicing near to the path through the woods, and weaving donuts through stakes set around the freshly coppiced trees to protect new shoots from munching muntjacs and other wildlife.

Otherwise we were to cut back the laurel which has been vigorously bouncing back, placing the cut material on habitat piles that are now placed throughout the woodland. In addition, at the bottom of the wood there is quite a lot of dead wood that needed clearing and putting on the habitat piles there, and at the top of the wood, the task of digging up the bamboo.

We set to work with our tools and made good progress throughout the morning, which was overcast and damp but thankfully not too cold. By tea break some of the donuts were really taking shape around the coppiced hazel. We had the usual incredible supply of tea, coffee and biscuits and with our energy replenished we set to work again for the second half of the session.

By the end, we had some beautiful coppicing to show for our efforts – first prize going to Kate! – and the bamboo bashers had extricated a particularly impressive length of bamboo root from the top of the woods. All in all a very good morning’s work!
-Joanna

Photos by Andrew (unless otherwise indicated):

Flooding at the Tesco end of the Ock Valley Walk

Thanks to Petra for the following photos of the floods taken yesterday at our work site at the Tesco end of the Ock Valley Walk: 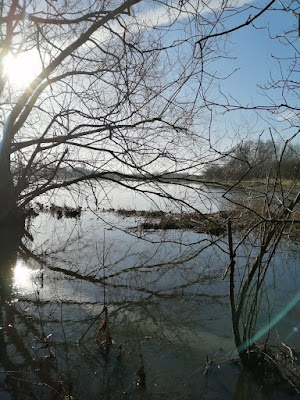 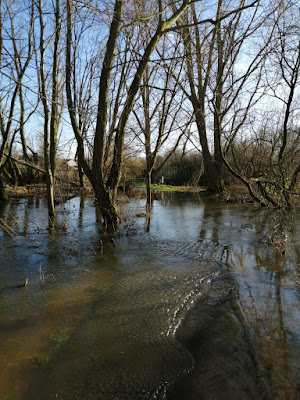 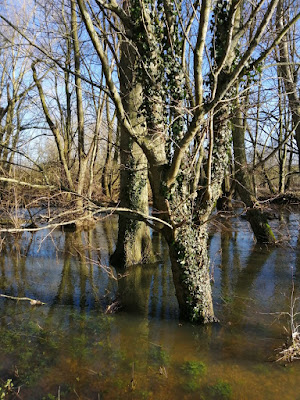 For this session we visited a site which was new to us; Hinksey Heights, to the west of Oxford. The land is owned by John Brimble and Oxford Preservation Trust look after it. It is a sloping site consisting of a meadow, a wetland area, woodland and a lake.

Sixteen volunteers turned out, including a newcomer, Jen and we were working under the direction of Rod d’Ayala. The site, off the A34 was approached by a private road and we had to park in the meadow, slightly worrying as the ground was very soft due to the recent rain. The weather, however, was fine and sunny after an overnight frost.

The tasks were to move cut reeds to a specific area and to cut back bramble and scrub from the side of the boardwalk which runs through the woods, then to construct a dead hedge.

We set to work on our chosen tasks. The reed shifting was quite difficult at first as the piles had frozen overnight, but most of this task was done by tea break time. The bramble and scrub were quite dense and needed a lot of work. Mr Brimble also joined us and set to work on another bramble patch. Judy Webb also arrived and was able to show us some interesting fungi, including the scarlet elf cup.

The area is popular with walkers and several passed us along the boardwalk, somewhat impeded by the piles of cut material.
By the end of the morning we were pleased to have constructed quite an impressive dead hedge. Finally came the task of driving out of the meadow, which we all did successfully without getting stuck. We look forward to returning to this site at a later date.
-Eleanor

Photos 1-5 by Ursula and photo 6 by Michele:

Another year, another Abingdon Green Gym AGM.  Usually this is our first gathering of the new year, however we had an outdoor session last week, just to throw in a curveball.

A respectable number of us, around fifteen in total assembled at the Methodist Hall along Appleford Drive, which was again the venue for our meeting. Following pre-10am teas and coffees to provide us with our collective caffeine shot, we kicked off proceedings by introducing an Oxford University student, Cassandra who is interested in working with us over the summer months. She gave a brief outline of her master's degree programme at the School of Geography and the Environment and her plans to join us do some research for her thesis. This would involve participant observation, interviews, and focus groups, to learn more about how biological conservation and human health and well-being can be integrated in green spaces.

Following on from Cassandra, Kevin ran through some apologies from absent members and the minutes of last year's AGM. After hitting us with the shock news that he and Carolyn would be standing down as chairman and secretary respectively after 2020 (and will therefore leave two considerable pairs of boots to fill), we rattled through the subsequent agenda within a couple of hours.

Selected highlights included the usual thorough financial report from Sally, a roundup of last year's sessions and locations from programme co-ordinator James, a summary of membership matters from Lesley and Eleanor making plans for planting sixteen saplings that she has already acquired, along the Ock Valley Walk.

Once the formalities were out of the way, it was time to make our way along the road to Kevin and Carolyn's house for the main event. The buffet lunch! A Green Gym AGM without a subsequent feast would be unthinkable, and thus the usual vast spread was laid out before us, with contributions from all us attendees. A toast was made for the year ahead before we tucked in.

We rolled home in the early afternoon, bellies full and ready for a busy programme of work sessions in the coming months in order to burn off all those extra calories!
-Andrew

Posted by Andrew at 1:48 AM No comments:

Happy New Year! We must have missed each other over the Christmas break as a good twenty of us turned out for the first session of the year – or in fact, decade - including two new members, Henry and Helen. The session was led by James, under the guidance of Lindsey Priddle of Oxford Preservation Trust.

We took up tools and tea things and made our way to the shelter in the middle of the site where we were given our various tasks for the day. These were three-fold.

First, we had brought buckets, water and scrubbing brushes in order to remove moss from the stone benches that are placed around the Wild Garden. In a similar vein we were also to clear the stone steps of built up mud and debris.

Secondly, we were to clear the paths of fallen branches and these were brought to Graham who was put in charge of the bonfire.

Thirdly, the steep steps leading to the top of Jarn Mound have become overgrown with brambles, blackthorn, ferns and other foliage, so we were to clear the steps and either side of them.

Having caught up with each others’ news we set to work. It was a gloomy day but there was no rain and by break time it had brightened considerably. Tea was taken around the shelter and Dieuwke offered round some delicious stollen she had received from previous green gymmers, Berndt and Ursula, who have long since returned to Germany. We took a group photo of everyone to send back to them.

For the second half of the session the winter sun was out transforming the wild garden into a place of real beauty. But then we heard cries of ‘Charlie! Charlie!’ – a family had lost their dog, a spaniel which had dashed off after a muntjac or perhaps a roe deer. It took quite some time for family and dog to be reunited but we all breathed a sigh of relief when he was finally found.

Leaving the fire to dwindle down, we collected up the tools and made our way back to the parking area, happy with our first session of 2020.
-Joanna

Photos by Andrew, Joanna and Margaret: