Today we met at Kennington Memorial Field, where we go twice a year to cut back the scrub and which is run by Oxford Preservation Trust. We welcomed two new Green Gymmers, Alex and Barbara, and we were also joined by OPT volunteers and Kennington residents.

The early mist soon cleared and the sun was shining as we made our way down the slope. Rachel from OPT showed us the line of trees and scrub, where she wanted us to cut bays to make a scalloped edge. This will mean that the fauna living on the edge of the scrub will have more habitat and more areas will be exposed to the sun at different times of day.

Graham got a bonfire going to burn the brash and we set to work. We needed to keep busy carrying pitchfork loads to the bonfire to keep it going. As we worked, we uncovered various items of litter and, worst of all, dog mess, much of it in black plastic bags. It is an unsolved mystery that people take the trouble to clear up after their dogs and then leave the bags behind.

Adrian had brought the tea kit and got the tea and coffee ready for us. After the break we carried on until it was time to stop cutting and carry the remaining scrub down to the bonfire.

We look forward to coming back in the Autumn.
-Eleanor 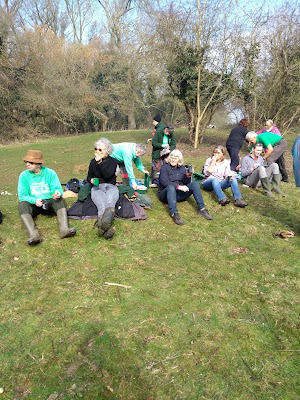 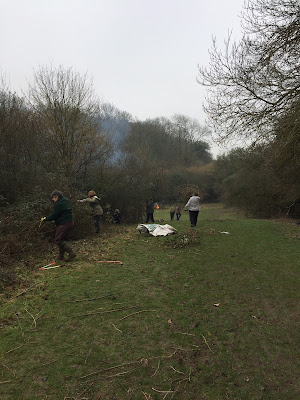 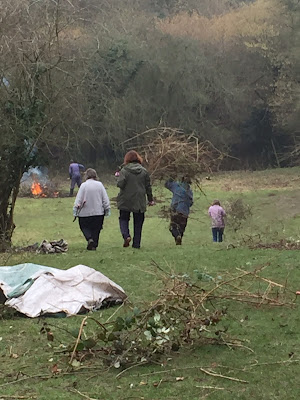 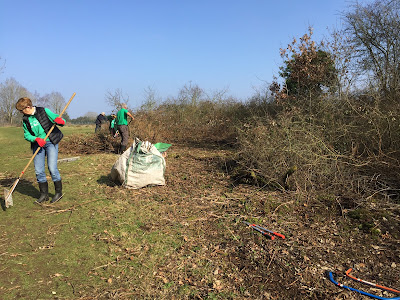 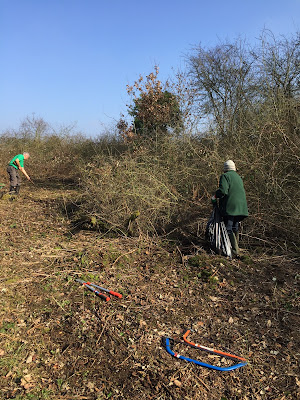 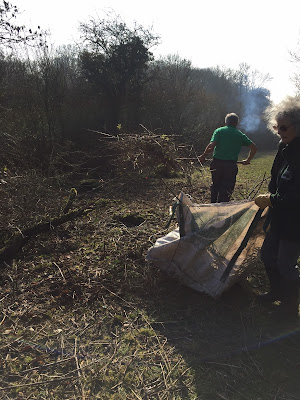 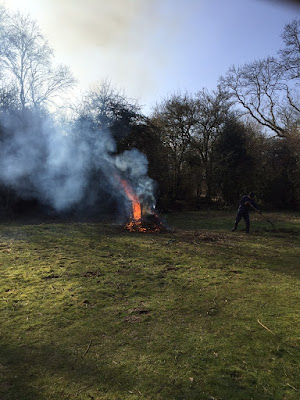 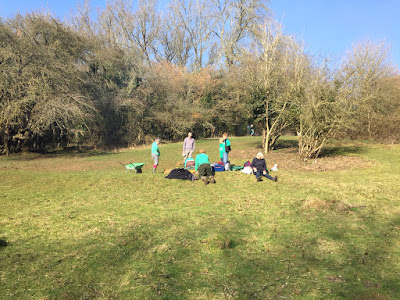 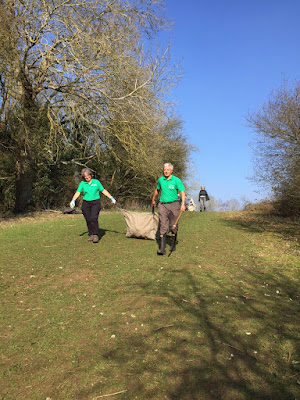 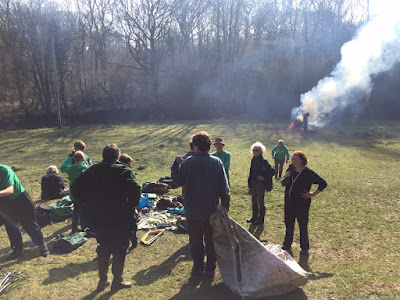 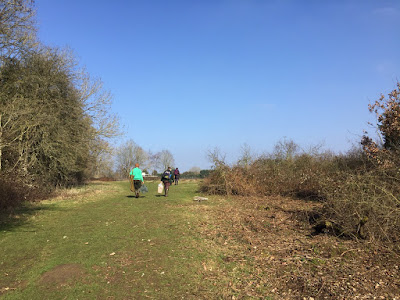 We turned out in force for today’s session at the Elizabeth Daryush Memorial Gardens up at Boar’s Hill, led by Kevin under the instruction of Rachel Sanderson of Oxford Preservation Trust. Seventeen green gymmers, plus local resident Patrick, and Stephen who works with Rachel, made our way to the meeting point at the frog- and toad-filled ornamental pond.

It’s the first time we’ve had a session on this site in the month of February. One of the reasons for doing so was so that we could see the fruits of our labours over the last year, and very gratifying that was too. All the clearing of bracken and brambles beneath the tree-lined borders of the garden has made way for the snowdrops and daffodils that have been planted to spring up. Before too many weeks, we’ll see bluebells flowering too.

After a brief introduction to the gardens, we were given our task which, in the main, was to cut back the brambles which have taken over at the bottom of the gardens, choking fruit and blackthorn trees which had been planted many years ago. We were also to cut back the brambles along the dedicated footpath - not a cycle path, although this doesn’t seem to deter some cyclists.

Using scythes and loppers we started hacking away and soon the piles of brush built up. Much as we love a bonfire at the green gym, it was decided not to have one here. Instead the cut material was forked away and added to dead hedges around the perimeter, to encourage beetles, insects and other wildlife. It was a mild, muggy day and before too long many members had disrobed their outer garments and hung them on the trees in the old orchard.

We made considerable progress in the first half of the session, and once the trees had been de-brambled we could see that some of them were in quite a poor condition with lots of dead wood – albeit covered in beautiful lichen. Rachel decided to leave them to see how they fare over the summer, and then to plant new fruit trees where needed.

The break was very welcome and as we stood drinking our tea we spotted some rogue cyclists on the footpath. Naughty! Notices were given, and Ursula brought up the ‘clash of the quizzes’ – not one but two quizzes, both to raise money for good causes, to take place over the following weeks. Eleanor also discussed the big litter pick which will take place in two weeks’ time back in Abingdon.

For the second half of the session, the group spread out over the site for further bramble clearing, continuing where we had left off. Loppers and bow saws were brandished in anger and an impressive amount of clearance was evident by the end of play. Good work from all in attendance!
-Joanna

Twelve green gymmers turned up for our first outing at Cothill Fen for 2019. Today’s leader was Margaret, under the instruction of Judy Webb of Natural England and her colleague Steph.

Two weeks had elapsed since our last session - owing to the snow of he previous weekend, thus we were raring to go!

It was a beautiful morning with pale winter sunlight breaking through the clouds as we made our way to the fen. On arrival, we could see how much it has transformed since our last visit in December. The pond has expanded considerably over the area, proving that all that reed cutting and raking has been worth it. In addition, there had been a lot of tree work around the perimeter. Many of the ash trees are dying but rather than chop them down completely, they had been topped to allow jet ants to continue living in them, as these attract rare beetles and insects.

Our task for today was mainly hazel coppicing in the woodland beyond the fen. The aim of doing this is to allow light right down to the woodland floor so flora and fauna can flourish. We were to put the logs into one pile, useful long wands into another and brush into a third pile.

Other than that, Judy commandeered three members to rake some cut reeds into a channel at the other end of the fen. While there, a section of alder trunk was recovered from a tree that had recently been felled. The rings were counted and verified and it was found to be 107 years old!

By tea break we had made considerable progress and were ready for our refreshments. In addition to the usual biscuits, we heartily delved into a box full of Devon fudge which Joanna and Andrew had brought back from their honeymoon on Dartmoor. We feared this might precipitate a sugar slump for the second half of the session, but if anyone was planning on this, as Eleanor pointed out: ‘we’ve chopped down all the trees – there’s nowhere to hide!’

Notices were given, with two quiz nights in the offing, and then it was back to work.

A frenzied last hour saw us make good headway into the woods and we were pleased to receive some praise from a local resident who congratulated us on our continued efforts.

During the morning, Judy performed her usual surveys for noteworthy specimens, and shortly before close, she came brandishing a winter polypore fungus for Andrew to photograph. See below for evidence!
-Joanna and Andrew

Photos by Andrew (and Margaret and Joanna where indicated):