The Tesco end of the Ock Valley Walk was this week's venue, and so we assembled in the car park close to Barclay's Bank to commence operations.  The first item on the agenda was to wish Margaret happy birthday and to present her with the card that we had all signed.  Following that, we transported our tools and provisions across the road to set up for the morning.

Colin had got a head-start on the rest of us, having started his litter pick in advance of our arrival.  We were soon underway however, having received instruction from session leader, Sally on the tasks to be done.  As well as the litter pick and some clearance of stray tree branches close to the path, the main activity was, once again, Himalayan Balsam pulling.

A number of dense patches of balsam had again sprung up close to the banks of the river - very tall and in flower. We certainly were not going to be short of work.

Mid-morning refreshment break aside, it was an intense morning of activity.  Fortunately it remained dry unlike the torrential downpours of the previous day and our progress by the end of the session was clear.  It would have been nice if the weather had been a little warmer, sunnier and generally more summery however!
-Andrew

We assembled in the farmyard at Manor Farm in Marcham for our second assault on the Himalayan Balsam along the roadside and on the farm land. Kristine had brought her grandson, William so with our oldest members also present, we ranged in age from 17 to 87.

Kate M volunteered to work in the ditch at the side of Mill Road and was soon joined by Dieuwke, who had cycled from Abingdon in an environmentally friendly fashion. We are anxious to keep this ditch clear of balsam and our hard work over the years has paid off as there are now quite a variety of native wild flowers growing there. The rest of us went through the gate into the neighbouring field to work along the field edge and Barry and Enid decided to walk up the footpath beside the field. The Himalayan Balsam in the field had grown very tall and we had soon made some very satisfactory heaps.

We had our break in the relative luxury of the barn with plastic chairs to sit on and a large concrete slab to serve as a table. Then it was back to work in the very pleasant sunshine, though we had no hope of getting rid of it all. We decided that what we needed was a chain gang of convicts but even that wouldn't solve the problem of the plants growing between the barbed wire fence and the steep sided stream.

At last it was time to tear ourselves away from the very obsessive task and return to the farmyard with the opportunity to buy meat, eggs and honey from the farm shop.
-Eleanor 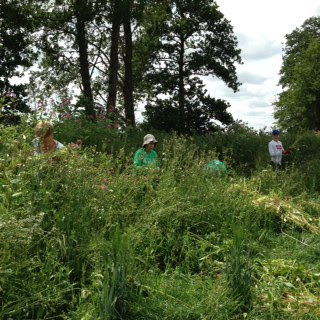 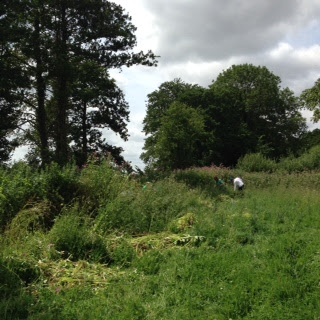 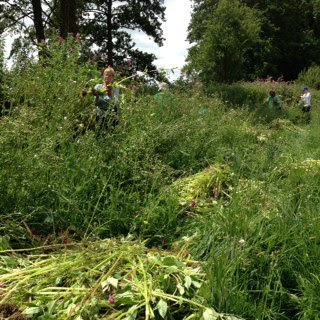 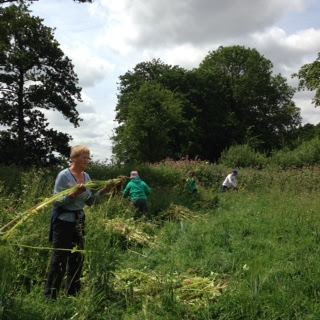 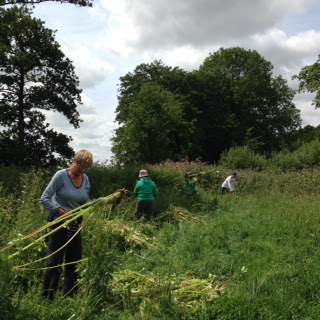 Today a small but well-practiced group consisting of eight of us returned to Woodhaven, Frilford Heath, under Sally’s leadership to continue to tackle the Himalayan Balsam. It was noticeable that efforts from previous years had been successful in achieving a reduction in a number of areas, but a great deal remained, quite widely dispersed around the site. Accordingly we split into small groups to search it out and pull it up.
-Barry

Posted by Andrew at 8:58 PM No comments:

Our task for this morning was to clear around the young trees we had planted over a year ago, as they were in danger of being swamped by nettles and goosegrass. We also needed to clear vegetation back from parts of the woodchip path, hunt down Himalayan Balsam and pick up litter.

We didn't have to look far for Himalayan Balsam. We could easily see the bright pink flowers sticking up above the nettles. The problem was, how to get to it through the nettles. On making out way through to one patch, we found a small silver birch sapling, completely swamped by the surrounding vegetation.

At first there didn't appear to be too much litter, but eventually one bag of recycables and another of rubbish were filled, mostly from the Drayton Road end of the site.

At  the tea break, we enjoyed cake, allotment grown strawberries as well as delicious biscotti, which Sally had brought back from Italy. Unfortunately there are no photos of these as they disappeared so quickly!

By the end of the session we had freed up a number of young trees and had some satisfactory heaps of very tall Himalayan Balsam. It was quite difficult to drag some people away from the latter very compulsive task, but there are many more small plants waiting to spring up.
-Eleanor

Posted by Andrew at 1:39 PM No comments: