This Saturday's Green Gym was well attended with thirteen in all, including our two new members from the previous week, Tanya and Petra.

The group assembled beside the weir at the town end of the Ock Valley Walk for our second outdoor session of the year.  However, due to the recent floods and for safety reasons, a no-entry sign had been fastened across the footbridge.  Fortunately permission rights had been granted by the town council and providing that we had the right spanners to loosen the sign, we were allowed access so that our session could go ahead.


The Ock was still fast-flowing and at a higher level than usual, but the area where we usually work had either drained away or had not been affected by the flooding.


The task as stated in the program, was to clear areas ready for planting new trees once we acquire them. The trees that we planted a few years ago had unfortunately been depleted, with a few more casualties having become apparent during the winter. The ones that are left, including (former Green Gymmer) Chris Thomas's memorial tree, look more resilient and hopefully have the worst of the season's storms behind them.


Now that the nettles and brambles have died down it gave us easier access to see where the dead wood and general foliage lies, so that we were able to saw, lop and rake, while making habitat piles for the local wildlife.


The litter along the path is usually in much abundance, and this occasion was no exception, though we were pleased to be able to cover the whole stretch between St Helen's bridge and the Drayton Road.  Hopefully the general public will be able to appreciate our work soon enough, once the path is safe to open again.
- Kevin

This was our first outdoor session of the year, following-on from last week's AGM.  We assembled opposite the Sophos building along Barton Lane, where a fairly large group of us joined up with the Barton Fields 'Green Team' group, led by site warden, David Guyoncourt.  We were pleased to welcome two new members to the Green Gym, Petra and Tanya, who were both attending for the first time.  The weather was dry, thankfully, in sharp contrast to the previous days and weeks.  Indeed flooding was still evident along much of the field, particularly on the side where it joins the Thames.

A large amount of tools were gathered and transported to the opposite end of the site, where we organised ourselves and received instructions on the work tasks from David.  The main jobs this time were to grub-up some of the blackthorn that has been encroaching rapidly on the boundaries and to cut back some of the bramble growth.  Both tasks were necessary in order to safeguard the grassland habitat for variety of plants and animals.

The blackthorn in particular had formed a dense thicket, with many new shoots evident on the outer edges.  With the trees currently free of leaves and sloes, now is the best time of the year to tackle the problem and cause the least disruption to the area's wildlife.  Mattocks and spades were the tools of choice, deployed to remove the plants in their entirety, including the roots.  The material was then cut into smaller sections and stacked into piles.  It wasn't long before a toad was discovered, taking shelter in the area. Rudely awoken perhaps, wondering what all the commotion was all about, the creature was removed to safety and the work re-commenced...

Nearby, bramble cutting was well underway and elsewhere, litter was being picked.  At 11am we downed-tools temporarily in order to refresh ourselves with tea, coffee and biscuits.  A much-needed break, since the tasks this week were fairly arduous by our standards.  We were thus able to compare blisters and scratches!

Fed and watered, a final push was then initiated, in order to complete the tasks to ours and David's satisfaction.  This, I am sure we achieved!  With such a large group of 20 or so volunteers, much progress on all fronts was evident.

The sting in the tail came at the very end of the session, when faced with sorting out all the tools between those belonging to the Green Gym and those in possession of the Green Team.  Not the easiest task given the vast array of hardware.  Then there was the issue of carrying it all back to our vehicles, ready to transport home.  Indeed, the walk back to Barton Lane seemed a good deal longer on the return leg.  No matter, I'm sure we all needed the exercise after our over-indulgences during the festive season!
-Andrew

Posted by Andrew at 5:41 PM No comments:

The new Abingdon Green Gym programme for Winter 2014 has just been published.  Click on the image below to enlarge or find a pdf version here (with much bigger text)... http://www.abingdongreengym.org.uk/files/2014/01/GGwinterprog14.pdf

Our next session will be on Saturday, January 18th at Barton Fields. 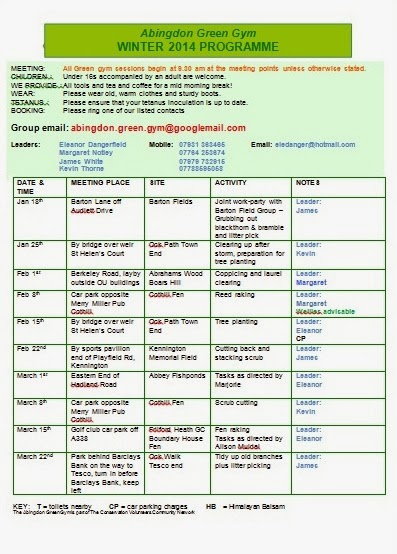 Posted by Andrew at 5:54 PM No comments:

We met at James and Ursula's house for the A.G.M. and we thank them for their hospitality in once again hosting the meeting. There were fifteen of us altogether, probably one of the highest percentages of members attending an A.G.M. of any club or society, but this may have been in anticipation of the delicious food to be served afterwards.

After coffee and biscuits, our chairman, James, began proceedings. We discussed the previous year's activities and looked ahead to sessions we hoped to run in the coming year. Something we would like to do is some construction work under expert supervision, such as board walks, fences or gates. We also discussed training needs, especially First Aid, new and replacement tools and publicity to attract new members.

During the meeting, Samantha arrived with baby Charlotte, who played happily on the floor, heedless of the serious proceedings. We are grateful to Samantha for finding time to attend in the midst of her busy schedule as the current Mayor of Abingdon as well as looking after her family. James and Ursula's house overlooks the Ock Valley Walk, where we are planning to plant some new trees in February, so the types of trees and the their care was another subject for discussion.

At the end of the meeting we went down to the kitchen, where a delicious spread was laid out. James and Ursula had provided cold meats and drinks and members had contributed a variety of other foods. The customary meringues proved very popular, Robert had made two varieties of tasty focaccia and Barry brought an apple strudel, which he had learned to make on a Danube cruise. After more coffee, people began to drift away, leaving James and Ursula in peace and their cats to be admitted back into the house.
- Eleanor