Today's session was at Barton Fields in conjunction with Abingdon Naturalists Green Team, who manage the site.

The wild flower meadow has not yet been cut but there was more than enough work for the twelve Green Gymmers and six Green Team members who were there. The session started with a heavy shower but this soon cleared and it became quite hot and humid.

A group of us went to clear a path between and around the ponds. The vegetation, mostly greater willowherb, had become so tall and dense as to be almost impenetrable. It was important to clear the willowherb without damaging plants such as purple loosetrife and meadowsweet. The others cleared nettles along the edge of the cycle track, cleaned up the interpretation boards and cut up and stacked branches from a fallen willow tree by the Thames Path.
New members were given the opportunity to have a tour of the site, including the five ponds which are important wildlife habitats
-Eleanor 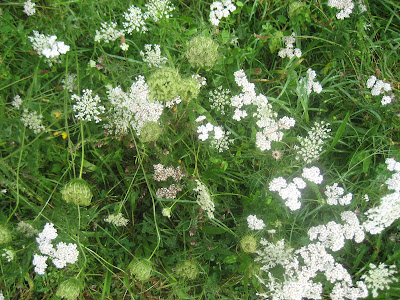 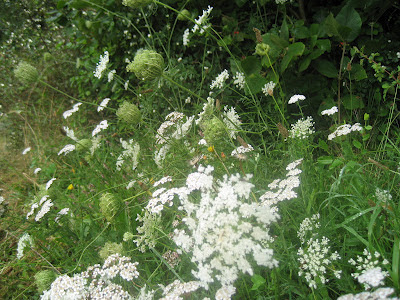 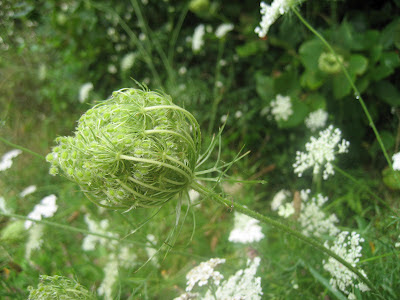 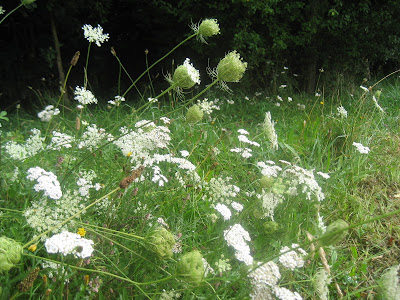 With our next programme not yet finalised, this coming Saturday we will be at Barton Fields - meet in Barton Lane opposite Sophos at 9.30 a.m.

Tasks will include clearing the path between the ponds, slashing vegetation along the edge of the cycle track, sawing up a fallen willow tree and litter picking. James will be leading. Contact details can be found on our main website... www.abingdongreengym.org.uk/contact-us
Posted by Andrew at 11:27 PM No comments:

We arrived at Abbey Fishponds on what turned out to be the hottest day of the year so far.

The tasks were to rake up and stack vegetation, cut off thistle heads and clear nettles which were overgrowing the outer paths.

By mid morning we needed a rest and our refreshment break was somewhat longer than usual, especially as the mugs had been forgotten. Fortunately the culprit managed to obtain some cardboard cups from the nearby Leisure Centre and made up for his omission by providing a lemon drizzle cake.

It was hard to believe we had been working in temperatures below freezing at Cothill Fen less than seven months previously.
-Eleanor
Posted by Andrew at 11:22 PM No comments:

Our new programme has yet to be published, but this coming Saturday, 18th August, we will be at Abbey Fishponds.  The meeting point will be at the Eastern End of Hadland Road at 9:30am as usual.  Tasks will include raking and stacking reeds and Himalayan Balsam pulling.  As usual for this site, wellies are advisable.

After weeks of hard work, it was time to relax and indulge ourselves so Saturday 11th August was designated as Summer Picnic day.

We chose Thrupp Lake partly because, after so much bad weather, we needed somewhere with a shelter, but as it happened, the day was hot and sunny.

Thrupp Lake had been saved from being drained and filled with fly ash from Didcot Power Station after a long campaign by the Save Radley Lakes group. It is now a nature reserve and managed by the Earth Trust.

We met in Barton Lane, transferred the food and drink to one car and then walked along the cycle track to the lake. After tea and coffee we followed the circular walk around the lakes. Then it was time for our sumptuous feast, to which everybody had contributed, consisting of chicken, ham, cheese, homemade rolls, quiche, salad, fruit and cake, accompanied by drinks both alcoholic and non alcoholic.

It was at least 2.30 before we made our way reluctantly homewards.
-Eleanor 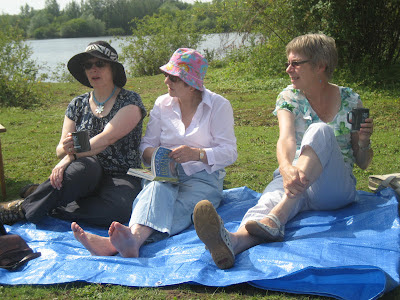 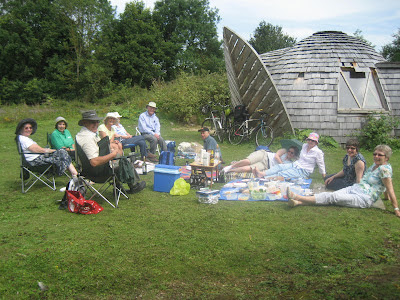 We returned to Mill Road in Marcham for another attack on the Himalayan Balsam.

The ditches and streams here drain into the Ock upstream from Abingdon, so seeds are quickly carried downstream.

James had done a recce and was shown a stream at the back of the Manor Farm buildings where this plant grows in abundance. We tackled the accessible bank, but the opposite bank had to be approached either by crossing the stream in waders or approaching through a field occupied by two "friendly" bulls. James and Robert chose the former course of action.

There was far too much balsam to be tackled in one session, so we will return to that location next year. We look forward to a rest and a picnic next week.
-Eleanor
Posted by Andrew at 6:01 PM No comments: