At last the return of Abingdon Green Gym to our rightful place in amongst the vegetation of the Ock path!

With a great turnout of 20 volunteers assembling in the parking bay at the end of St Helen's Court which gave us enough room to keep our distance. Once every one had signed in for tracking purposes we loaded up the equipment and headed down to our usual base by the side of the Mill stream.

The tasks were clearing round the young trees that we had planted a few years ago, chopping up fallen branches caused by the winds, clearing over hanging vegetation on the mill stream, wood chip laying on the path and of course litter picking. Once the outline instruction by the session leader of the tasks was given, it only remained for the volunteers to decide which one to pick, or, if they didn't mind the leader would suggest one that was under manned.

As you can see by the photos Adrian was keen to lay the wood chip as he had brought his own barrow and shovel (one volunteer is worth two pressed men). Dieuwke quickly offered to help along with Barbara. James had brought his own waders so we knew what he wanted to do, coercing Graham to don the GG waders and remarking how fetching he looked (ready to take on the raging torrent). Sarah also felt the need to get dressed for the occasion by putting on the other set of waders and going in!  Wendy worked on the bank ready to handle the cut branches and stack them into habitat piles.

The clearing of the nettles and creepers  around the young tress was met by a strong team of Sally, Olivia, Dan, Rosie and Joan. Not only did they do a great job ,their endeavours were rewarded by coming across a semi dismantled  mobility Scooter and a large bag of belongings which were taken back to the parking bay for the waste service to collect.

Meanwhile a four person team of Lesley, Margaret, Janet and Petra spread out and trawled the path from the town end to the Drayton Road collecting litter.

Finally, the sterling work of chopping up fallen branches in to habitat piles, was taken on by Ursula, Carolyn and Michele - even entering the shallow Ock river to wrestle with a reasonable sized tree that was causing a "back log" which might stem the flow in possible flooding later.

There was no coffee/tea break as social distancing could be compromised so the session was shortened to about 2 hours, hopefully this will change sooner rather than later as getting together for a drink and biscuit, or if we're lucky home made cake kindly supplied by one of the volunteers is the most enjoyable part of the morning. 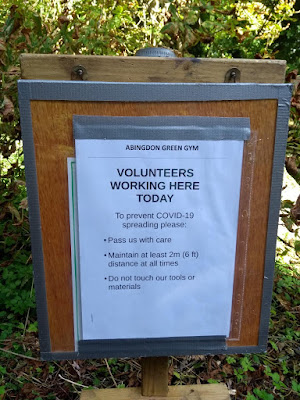