It was a beautiful fine morning for Green Gym as we returned to Cothill Fen SSSI to help Natural England with its ongoing programme of cutting the reed and raking it off in order to reduce the build-up of nutrients, as the specialist fen and wet woodland flora favour poor soils.  Cothill Fen is one of a number of calcareous fens in Oxfordshire, where spring fed water percolates to the surface and deposits lime in the form of tufa.  We are very blessed as a county to have these precious fens as they are a very rare habitat indeed.  15 Green Gymmers were joined by local scyther, Jim Ballantyne, and we worked under the direction of Steph Wilson from NE and Judy Webb.

Our first task was to load our heavy tools, jerry cans of hand sanitiser and water for washing hands onto Steph’s van - we all heaved a collective sigh of relief - as we then made our way from the car park down the track, past Parsonage Moor and reached the adjoining Cothill Fen.  Adrian had arrived early and had started a bonfire for the brash of some fallen oak limbs.  We were all amazed to see the ponds had virtually been cleared of reed when we arrived – such a different sight from several years ago when the reed was well over 3m high and we had to take Judy’s word for it that there was a very deep pond there and to avoid the area at all costs!  Reed growth in other areas was a little more than it would have been had the fen been cut in the spring, but unfortunately lockdown had prevented this from being done, so the scythers were very much appreciated.

Steph then outlined our tasks for the morning – Adrian would manage the fire for a bit and some people were needed to help him cut up logs and move another pile of logs into habitat piles and off the area where the wild flowers grow.  Tools had been numbered so that people could take loppers, rake or a hayfork and then could keep it for use after break to save disinfecting it again.  Everyone was careful to wear gloves when handling tools.

Roger, Michele, James (W) and new member, Marga, put their hands up to help Adrian.  Ursula, Dieuwke and Lesley started cutting back the hazel hedge running alongside the log track at the far end of the Fen.

Jim B had made his way across one of the causeways and started to scythe.  He was joined by Graham, Margaret, James (M) and Phineas who helped rake the cut reed (some of which had been cut by work parties earlier in the week) and fork it onto the causeways.  We all had fun trampling it done and luckily no-one fell in the deep water!

Barbara and Rosie were also busy raking and pitchforking piles of cut reed in another area, but both stopped short of doing a double-back flip, as they almost trampolined on the pile of cut reed to flatten it down and stop it from blowing about in the wind.

Break time soon arrived and to everyone’s relief!  Although we all kept to a social distance and we all had our own refreshments and snacks, there was lots of the usual chatter.  It was not long before we set back to it after break suitably refreshed.  Adrian took up his scythe to continue where he had left off the previous day.

Margaret disturbed a baby toad and it was amazing to see how far and quickly it travelled with its small legs as it climbed up over tussocks.  There were lots of common darters (a type of dragonfly), mating.  It was great to see the marsh lousewort in flower.  This is parasitic on reed (it is a relative of yellow rattle) and works in a similar way as rattle does on rye grass, by suppressing reed growth as it takes up sugars and other nutrients from the reed’s roots.  A very useful plant to have!

We left feeling as though we had done a good morning’s work, with the fen looking much better … and we were also very grateful to Steph who loaded her van with our tools at the end of the session and ferried them to the car park for us.  Adrian stayed to continue scything and keep a watchful eye on the fire, while Judy had picked up a bag full of devil’s bit scabious seeds and was sowing them, as we wended our way back up the track to the car park.

Smiles all round!
-Sally 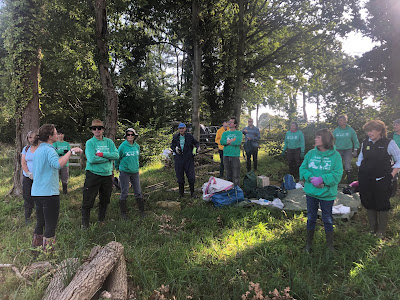 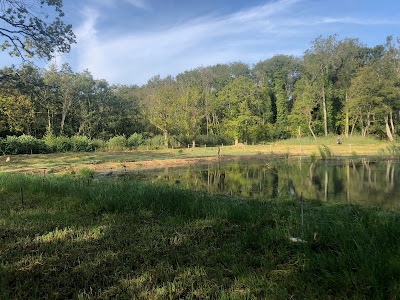 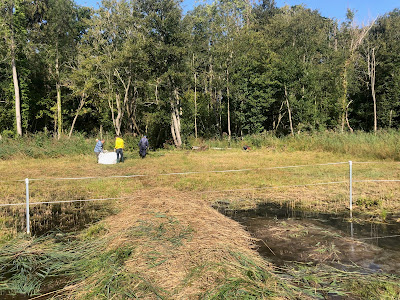 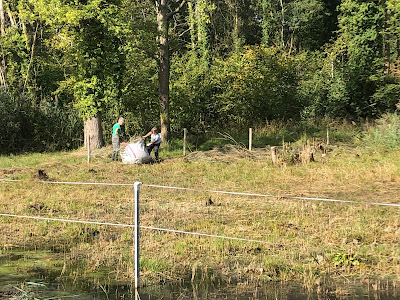 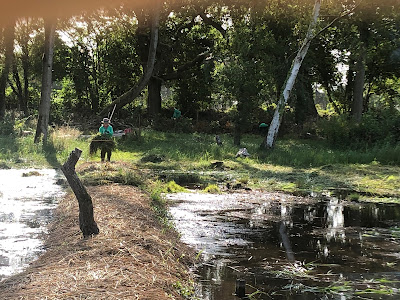 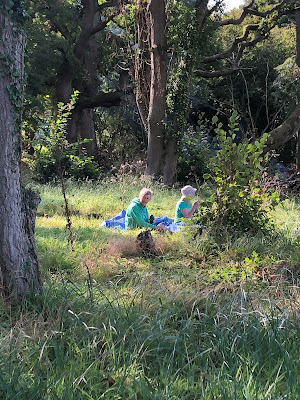 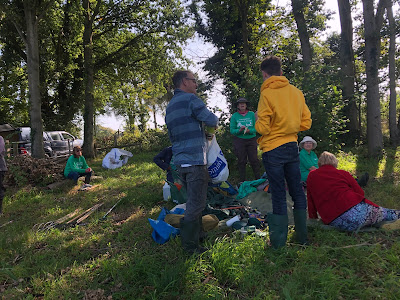 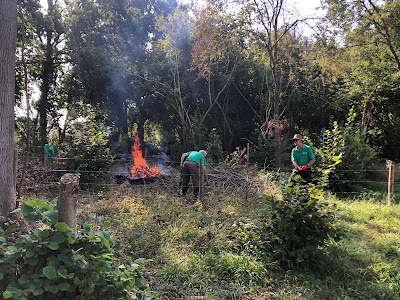 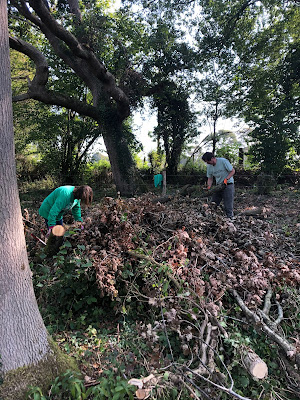 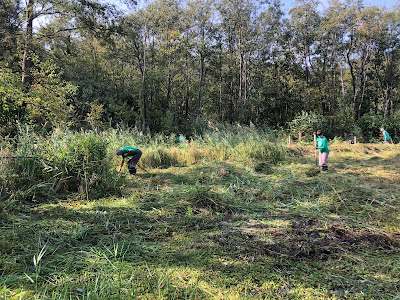 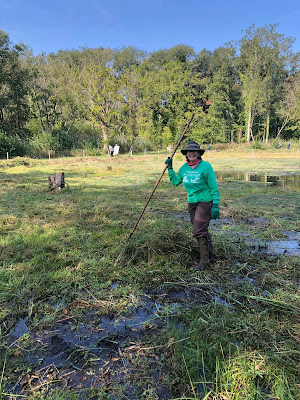 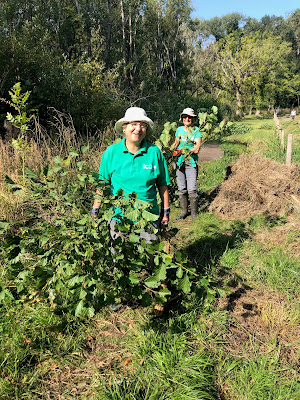 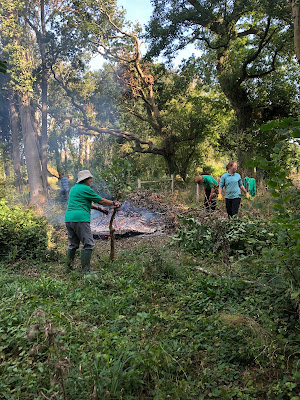 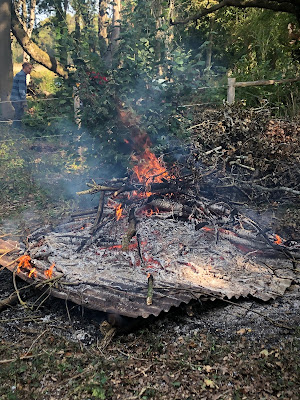 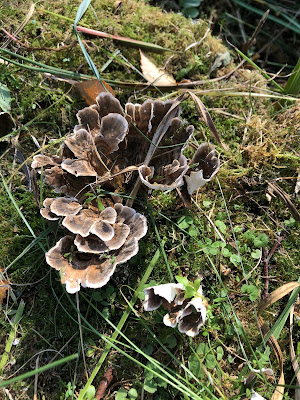 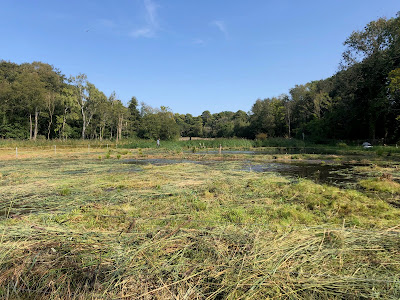 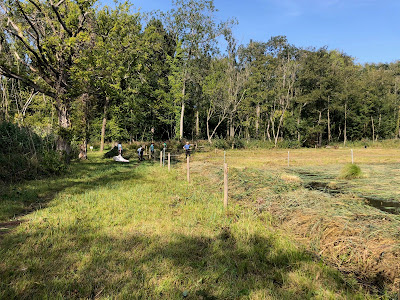