By Andrew - September 05, 2018
Margaret had the honour of leading this weekend's session at Southern Town Park. Our instruction was to clear the wildflower bed which we established a couple of years ago. The weather was good, starting out warm and rising to 25°C by lunchtime!

We began by collecting any wildflowers that were left and distributing them amongst us (see photos). After that, we plucked any nettles that had infiltrated into the bed. Finally we slashed back the rest of the plants and raked them into a pile away from the area. This was all pretty much achieved by break time.

After the much-needed break (we had the luxury of a solid iron park bench to serve the refreshment on and enough seating for most of us to rest and take the weight off), we were back to the usual routine of slashing and lopping down nettles and brambles that were starting to encroach upon the paths and tracks.

Then of course litter picking, filling half a dozen bags - this is about the average for this location, with no unusual items of interest!

There was one minor casualty during the session when Graham disturbed a wasps' nest in a bunch of nettles and sustained a sting to the forehead.  Treatment was administered by Carolyn with some magic ointment from our First Aid box.
-Kevin 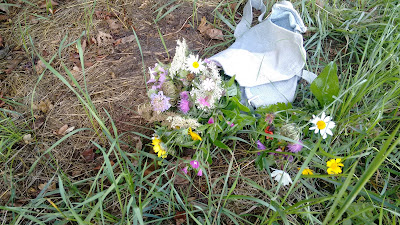 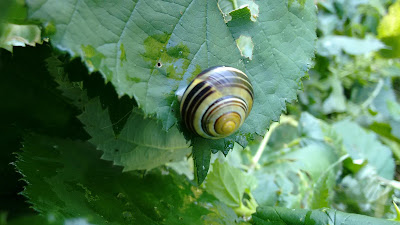