This was a joint session at Cothill Fen, held with other local Green Gym groups to commemorate the Abingdon Green Gym's 10th anniversary.  The event was organised by one of our regular leaders, Margaret, who is a founder member.

We assembled in the car park opposite the Merry Miller pub at 10am - 30 minutes later than usual.  This afforded the volunteers from further afield a slightly later departure.  As well as the eleven Abingdon Green Gymmers in attendance, we were joined by others from the groups in Sonning Common, Woodstock and Wallingford, and not forgetting session supervisor, Bob Silverwood from Natural England - the organisation who manage the fen.

Bob had arrived in his landrover and was able to transport all our tools and other paraphernalia directly to the site, thus saving us the hard work of carrying them all the way along the muddy track. We re-convened by the Cothill entrance gate and set up our base.  Bob then gave an introductory talk on the area, outlining what we would be doing during the morning as well as discussing some of the plans for future management.  This included information that five ponies are soon to arrive here to graze and keep the reeds and other vegetation from becoming too overgrown.

On this occasion, the tasks were twofold - to continue constructing a boardwalk around part of the perimeter footpath and to un-obstruct and more clearly delineate the remainder of the path along its length.  We split into groups and commenced operations, just as the clouds burst and (unusually for one of our sessions!), the rain began to fall heavily.  Fortunately there was some shelter to be enjoyed amongst the trees since much of the footpath passes through woodland.  Eventually however, the precipitation percolated through the canopy, giving us a mild soaking!

Not to worry - this was intended to be a celebratory event after all, and the prospect of tea and cake at the interval provided motivation enough to continue.  A special 10th anniversary cake had been prepared by Eleanor, along with other food contributions including some strudels provided by Barry and Enid.  Once the cake had been cut and refreshments taken, our chairman, James gave a brief speech, thanking Margaret for organising the event and the members from the other groups for making the effort to join us.  It culminated in the sharing of a toast for the continued success of the Green Gym.

Back to work then, for there was a footpath and boardwalk that required further attention.  These were dealt with in an enthusiastic manner despite the inclement conditions and by 1pm, we had made sufficient progress that we declared the session complete.  Off to the Merry Miller it was subsequently, for a pub lunch and the opportunity to better socialise with our neighbouring Green Gym groups.  Here's to the next ten years!
-Andrew 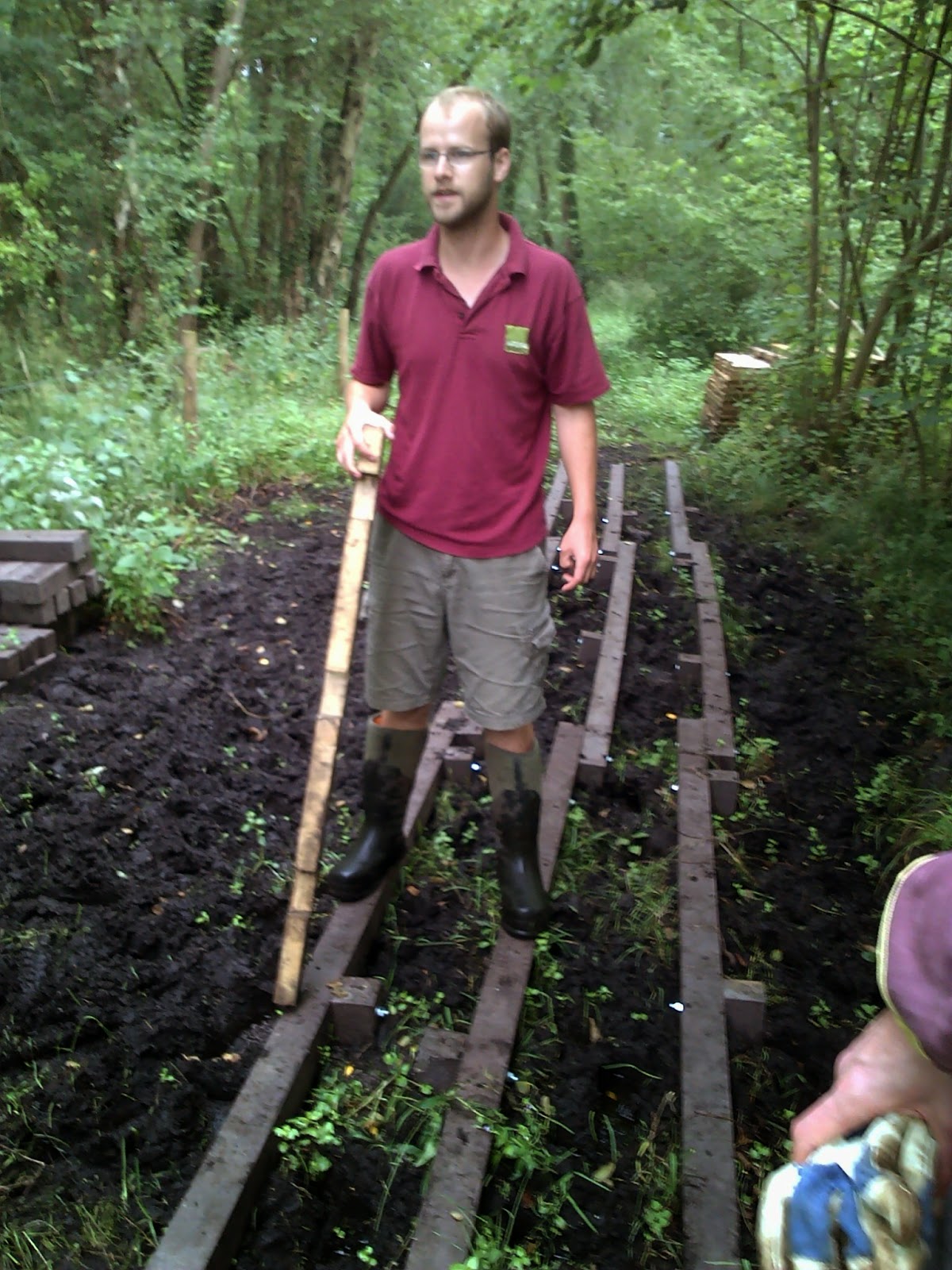 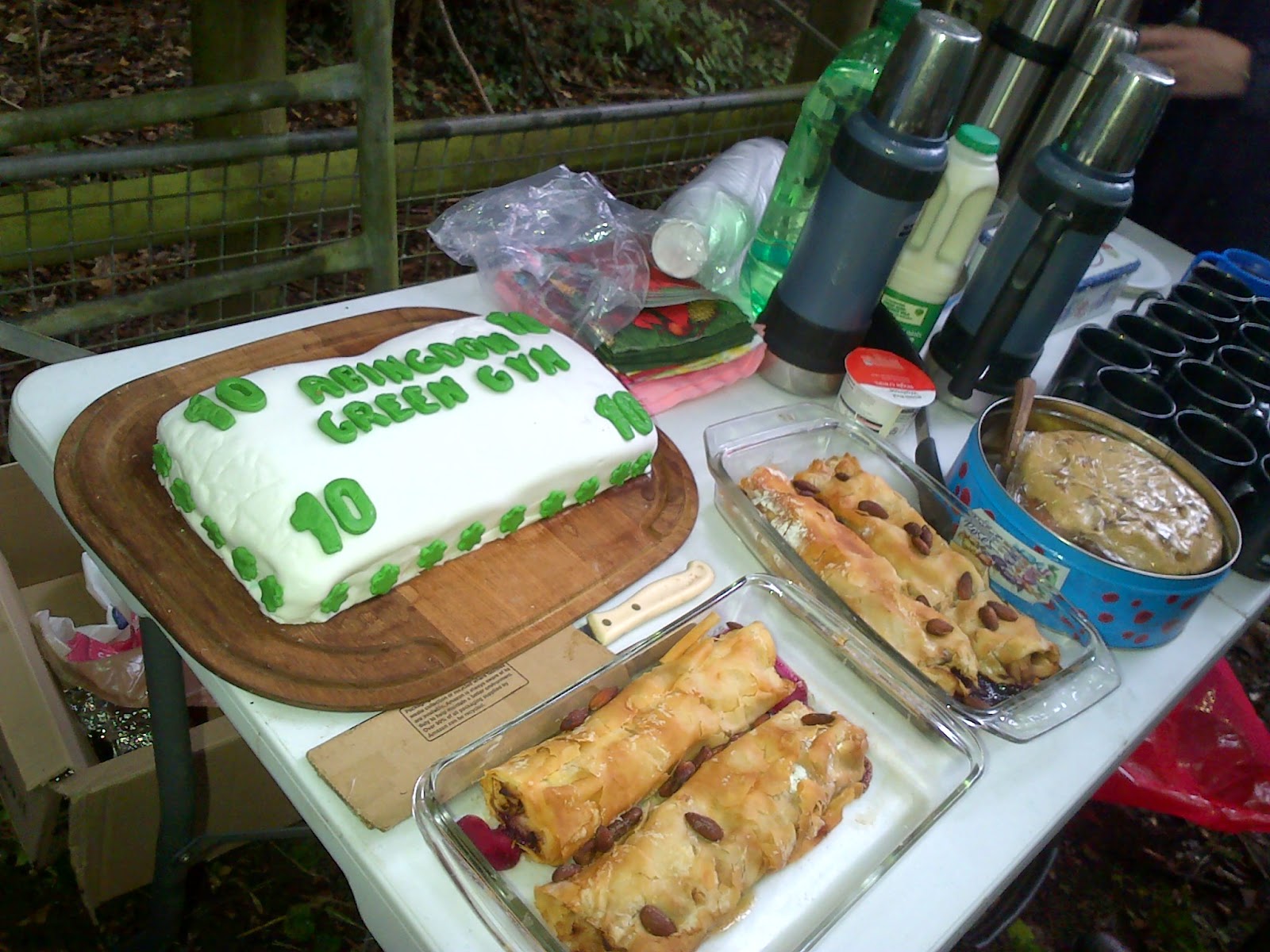 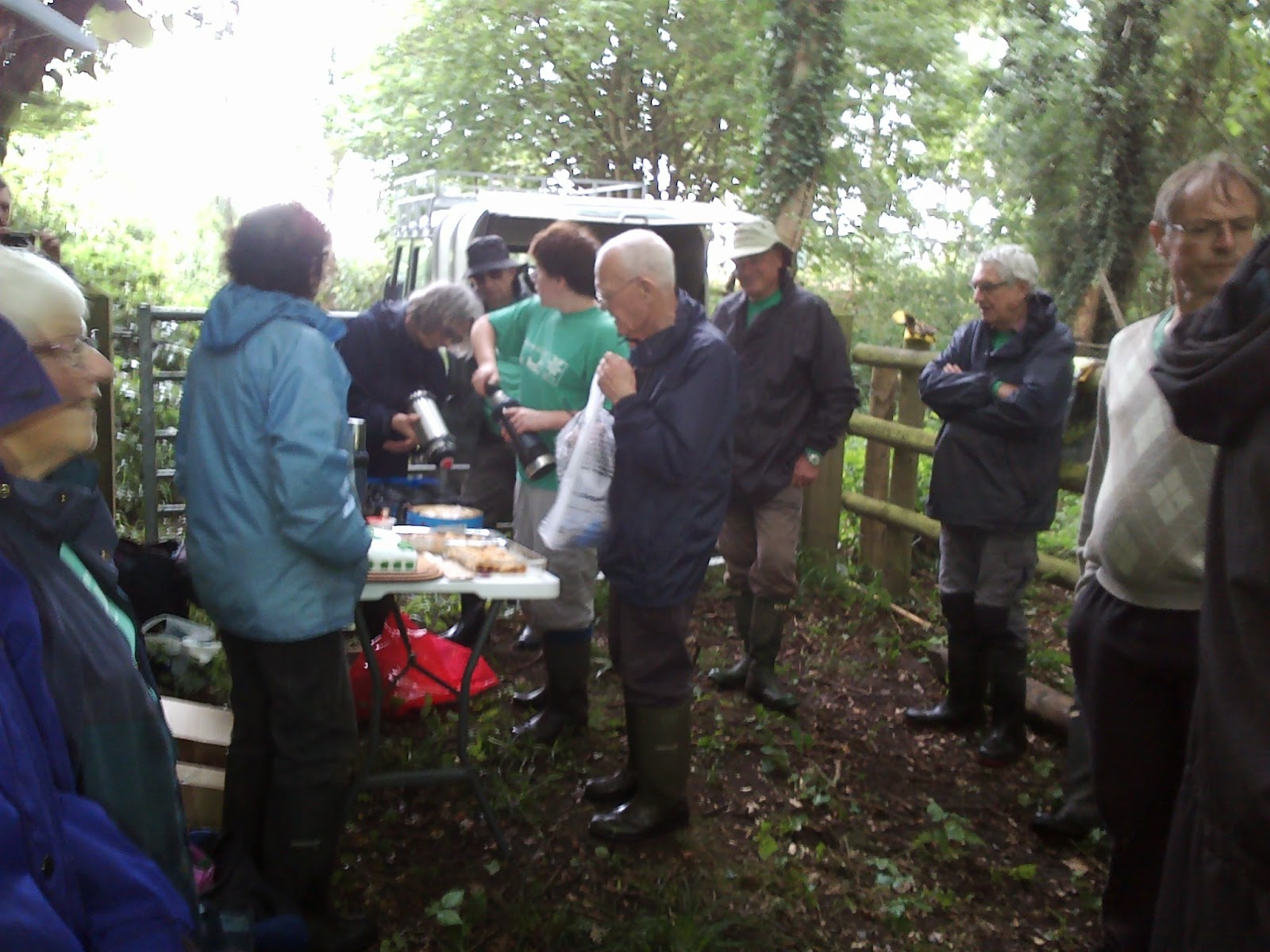 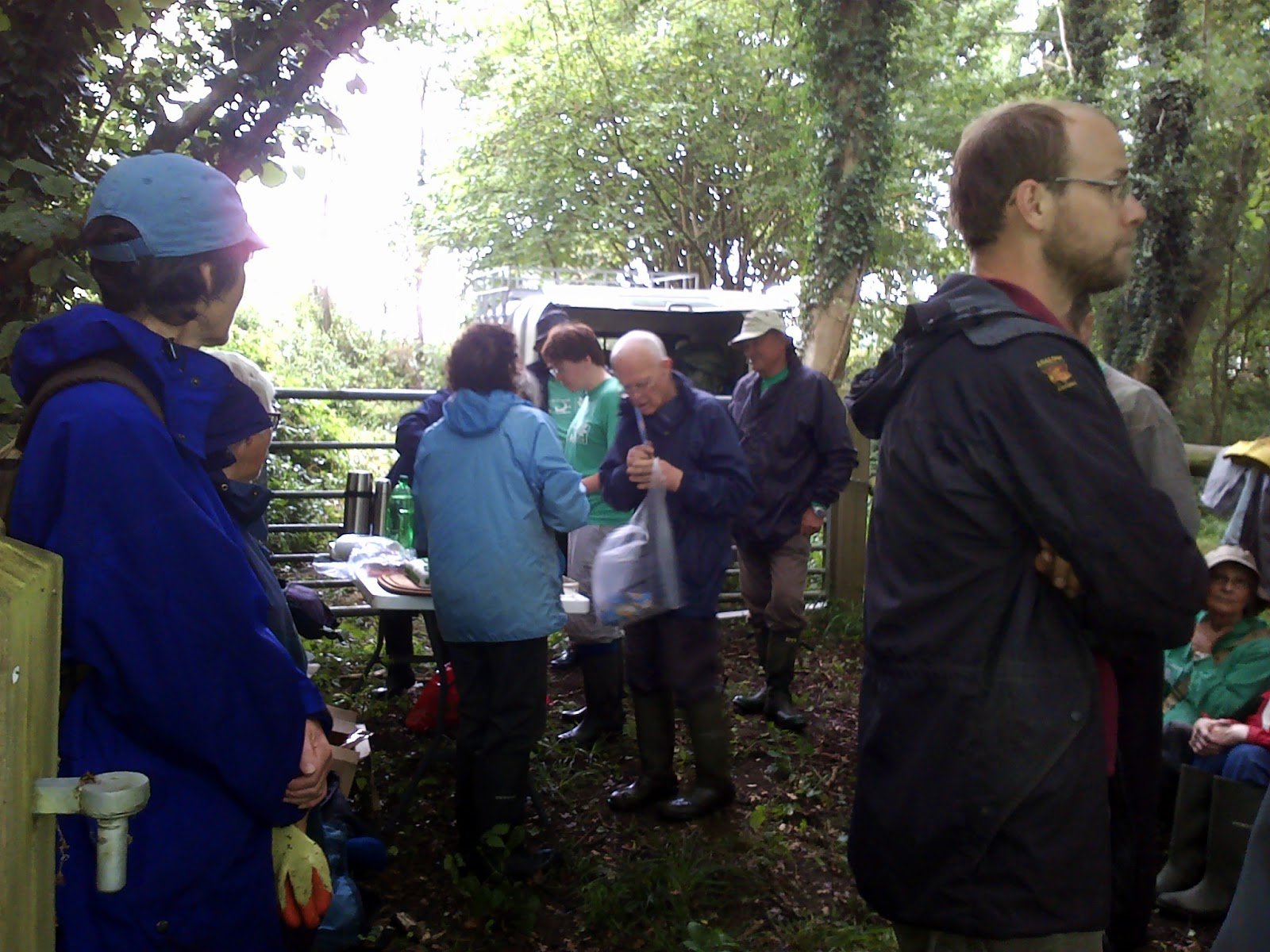 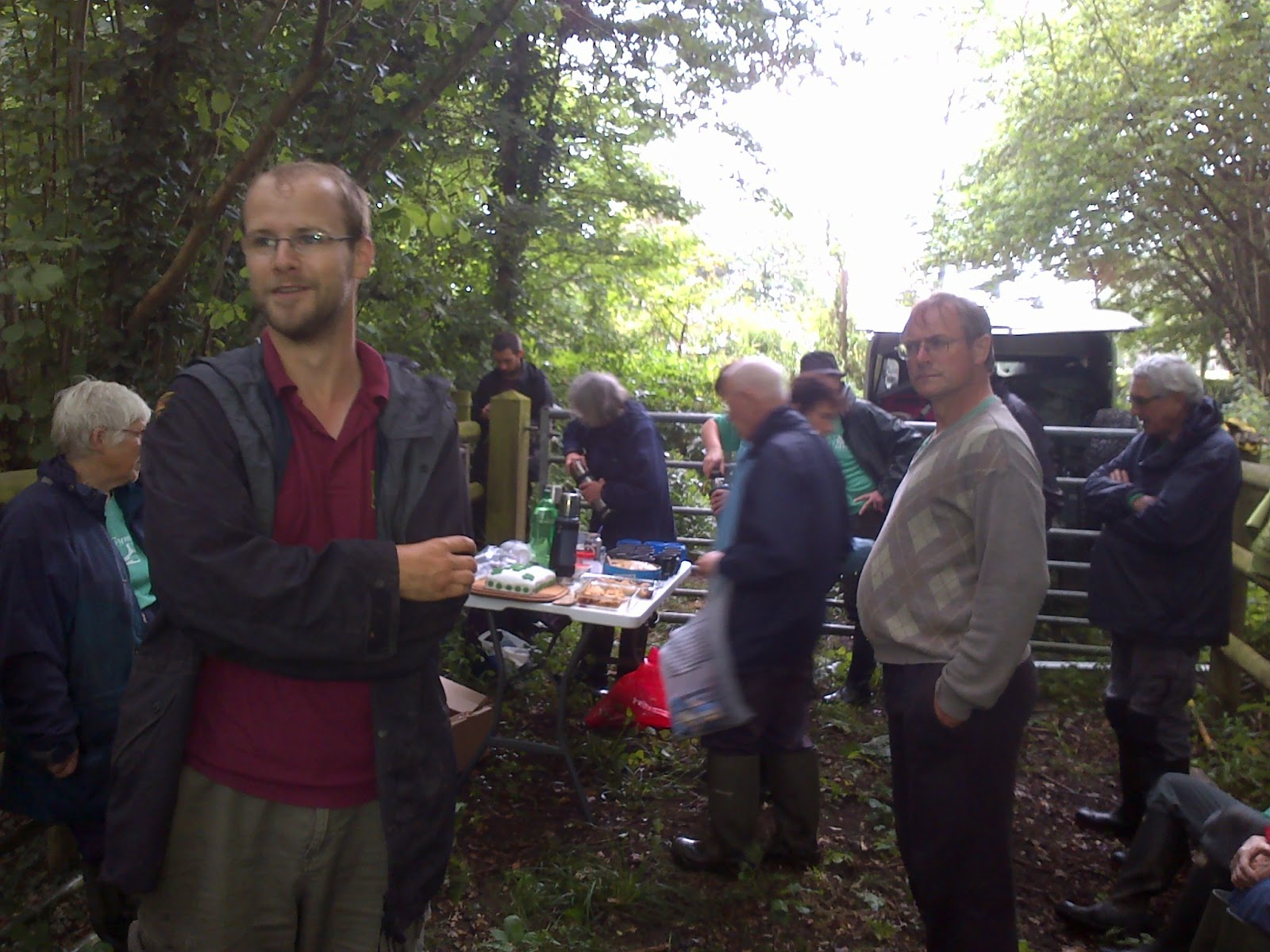