By Andrew - March 30, 2020
Today we have a fantastic round of contributions from Henry and Helen, Ursula and Sally:

It’s been an interesting few weeks (putting it mildly) but we have both now settled in to working from home which looks like it will be an arrangement for many weeks to come. We had a couple of days of holiday to use up before the end of March and, with our green fingers itching, we spent our days out doing a ‘mini Green Gym’ in our garden.

After a very soggy February and March, the recent sunny weather meant that the ground was dry enough for Henry to do the inaugural lawn cut for 2020. This also included some much-needed raking where the moss had taken hold.

At the back of the garden, the border which we had painstakingly created last summer was beginning to show the first signs of spring growth with the clematis starting its climb of the trellis, the hydrangea sprouting strongly and the tulip bulbs poking their way through. Helen busily spent Thursday afternoon planting in some spring pansies which we managed to rescue before the supermarkets went into crisis mode.

We also got round to a long-awaited activity - putting up a solitary beehive which we were gifted for Christmas. The hive has a number of small holes where solitary bee species (such as Mason bees and Leaf-cutter bees) can lay their eggs. Hopefully this will encourage more pollinators into the garden come the summer time. We’ll keep you updated!
-Henry and Helen 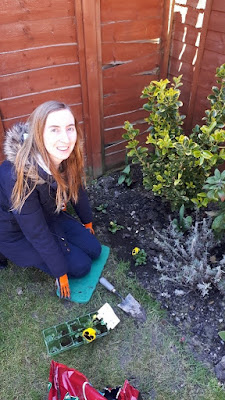 I remember where I bought this lovely pot of raspberry jam.  It was on a walk up to the Wittenham Clumps.  There is a smallholding at the end of the track that leads out of Dorchester towards Days Lock and the Clumps. The old man keeps a lovely flock of chickens, and he showed me how to let them peck corn straight out of my hand.  He also sells produce like tomatoes, some vegetables, fruit and of course eggs, out of a little stall at the front.  When he is not around you just leave the money in the honesty box.

Whether he is still there, with his wife who made the jam, I don’t know, as it has been quite some time since we walked that way.  It became a bit less tempting because the landowner fenced all his fields, leaving a rather narrow path between horrible barbed wire on the way down to the lock and along the river.  But there are other small producers along that lane selling surplus seedlings, flowers and eggs.  So maybe still worth a visit, when we are allowed out again.
-Ursula 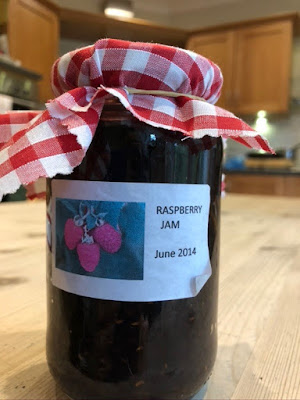 For GG members in need of an outlet for their spirit of adventure, they might be interested in this!
-Sally 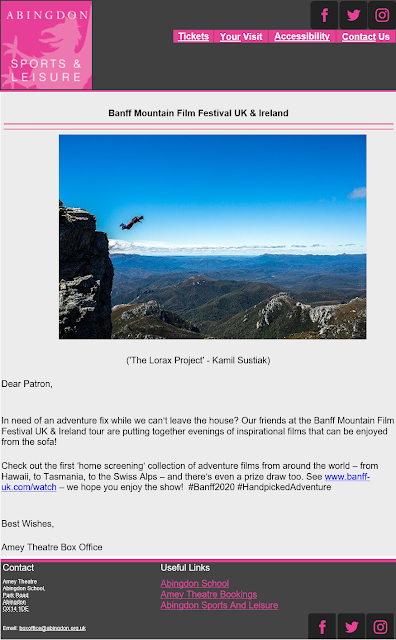